Top Drag Racers From the Sportsman and Pro Mod Ranks 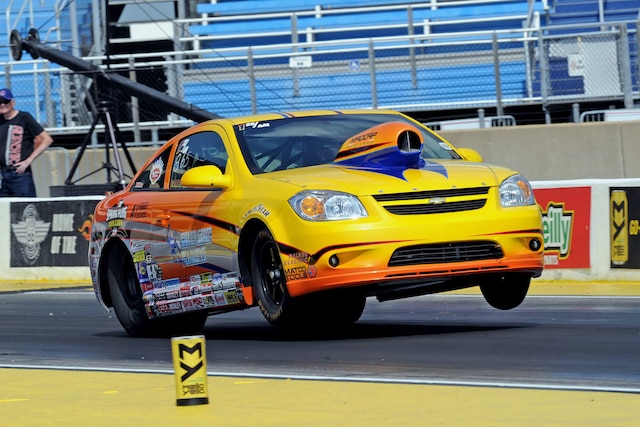 Nice Northern Nova
Southwest Ontario, Canada, is home base to a stunning Super Street 1962 Chevy Nova. Owned by Ray and Tammy Griffin (Sarnia, Ontario, Canada), this spectacularly assembled, show-quality machine is one of the most popular within Eastern Canada’s Outlaw/Fast Street Car drag racing scene. Using a ProCharger supercharger, this owner-assembled 540ci big-block, which runs on gas, produces about 2,300 hp on race day. Up until 2008, it was an overpowered, street-driven car. Since then, Ray and Tammy have concentrated their efforts exclusively on the dragstrip. They keep their drag racing ventures local for the most part and to the eighth-mile mark, and have a best of 4.61 and 163 mph to their credit. The team funds their racing operation from their own independent business (Griffin Autotek) and cites valued support from sponsor Lambton Metals (Vince Sava) and also team friend and expert fabricator Jeff Vance.

Camaro Championship Clout!
Camaro-bodied drag cars dominated the various Pro Modified classes yet again during 2018. That list included championship title wins for drivers Mike Janis and Jason Hamstra on two significant circuits. Over the course of the E3 Spark Plugs NHRA Pro Mod Drag Racing Series’ 12-race schedule, regarded as the highest echelon for Pro Mod cars, Mike Janis emerged as season champion. The western New York-based racer, whose companies Mike Janis Superchargers and Jan-Cen Racing Engines are industry leaders, drove a partnership car with Doha, Qatar-based AAP (Al Anabi Performance) to the title. After finishing Second in NHRA Pro Mod points in 2015, this was Janis’ first NHRA world title to complement his two IHRA world championships (2001, 2004). Racing the supercharged, Jerry Bickel-built 1969 Camaro, Mike had a big win at the NHRA Virginia Nationals and combined consistent high-qualifying and frequent late-round event finishes to clinch the title at the season-ending race held in Las Vegas. During the season, Mike recorded his career best elapsed time (5.69) and speed (252 mph). Mike and his talented team will continue to use this same Camaro (which was built new in 2017) as both a rolling R&D testbed and also for their title defense effort in 2019.

Over on the NMCA circuit, it was another veteran Pro Mod racer, Jason Hamstra claiming glory, also in a 1969 Camaro. For Hamstra (DeMotte, Indiana), who has been involved in Pro Mod since 2005, this VP Racing Fuels class championship came in his second year racing an Alan Pittman-built, supercharged machine. 2018 was the first year Hamstra, who had a Second Place NMCA season points finish to his credit previously, ran the full race schedule. He was a consistent top qualifier and won three events on the highly competitive, six-race tour. Jason and his independent, self-funded team clinched the title when they won the season’s final event at Indy (the NMCA World Street Finals Presented by Chevrolet Performance). Hamstra is very well known, too, for helping introduce (in conjunction with Coan Engineering) the torque converter option instead of a clutch for Pro Mod racers ... a change that quickly spread throughout the class and has become the new norm.

Check out this 1992 GMC S-15 truck and 2005 Chevrolet Cobalt SS only at www.chevyhiperformance.com, the official website for Chevy High Performance Magazine!

We tweak the ECU on this 2009 Chevy Cobalt SS and get some pretty impressive horsepower gain! Only at www.gmhightechperformance.com, the official site for GM High-Tech Performance Magazine.

Check out this 2007 Chevy Cobalt SS get a Performance Cat Back Exhaust and a Performance Air Induction Kit. Only at www.gmhightechperformance.com, the official site for GM High-Tech Performance Magazine.