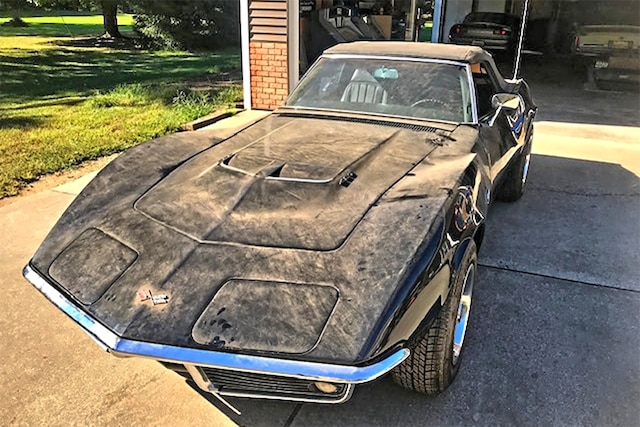 “There’s so many black cars that I’ve looked at through the years that just were not originally black cars.”

Jonathan Herrick finding a 435-horse 1969 Corvette convertible (his passion) in black (his favorite) is a great story, owing to the rarity of this Corvette species and the perseverance and odyssey of his 25-year search.

But when Herrick found a real, black 1969 435-horse 427 convertible, the car’s provenance turned up a unique backstory, but let’s first start with the tale of Jonathan’s 1969 coupe find.

“I ended up settling. I looked for years for a real factory black Tri-power Corvette convertible. I wanted a big-block and I ended up buying a 1969 coupe with side pipes up in Wisconsin. Although it wasn’t a Tri-power, it had a 390hp 427.”

While detailing the 427 in his new coupe, Jonathan found an unusual octagon-shaped tag on the radiator from a shop in Kalamazoo, Michigan. He called the owner of the shop and it led him to the past owner of the car, a man named Tony.

“I called and said, ‘Hey, this is Jonathan from St. Louis. You don’t know me. I am calling about a black Corvette you used to own.’” He said, ‘Yeah, yeah, yeah. Well, I don’t own it, but what can I help you with?’

I go, “Well, was it a black coupe with side pipes?”

He’s like, “I do remember that car back then. I thought you were talking about the black convertible that is out in my barn right now.”

And that’s how Jonathan Herrick found his dream Corvette, a real barn find 1969 convertible, Tuxedo Black with a 435-horse 427, owned by a man named Dave. Tony worked with Dave for years at a dealership. Dave was into hot rods, drag raced muscle cars and owned this 1969 model since 1991.

In 1993, Dave parked the car with just 43K original miles after the gas tank began to leak. It stayed in the corner of the garage (heated) for the next two-plus decades. Last year (2018), Tony took it to his barn with the intent of getting it running.

The car wasn’t for sale, but Herrick kept after him, and finally managed to make a deal several months later. Dave played the role of caretaker of the 435-horsepower 1969 Corvette convertible from 1991 until he sold the car in 2018.

That, in and of itself, is a great story, but when Jonathan delved into the 435’s provenance, he found and told us the backstory about Jack Jones, the man who ordered this car brand new at Bewley Chevrolet in Greeneville, Tennessee, in December 1968, and took delivery in March 1969.

Jones owned a speed shop back in the day where he worked on high-performance cars. He happened to have a friend that ordered a triple-black 1968 L88 convertible with a hardtop from Bewley Chevrolet. This is the same well-known car with 16,000 miles that traded hands just a few years ago at action for $800K.

Jones liked the L88 so much he decided to order one himself. He checked the boxes for a 1969 ZL1 convertible, so aluminum heads and aluminum engine, a giant step above the L88. Jones was set to order a black ZL1 convertible, except his wife had a problem with the no-radio requirement for this engine option.

Altering the order from a ZL1 to an L88 negated a heater, another wife no-no. Eventually, Jones settled for a triple-black 435-horse convertible.

This is the 435-horse black convertible that Jonathan Herrick searched 25 years for and finally found, but which shoulda, woulda, coulda been a true, triple-black ZL1 convertible and arguably the rarest and most desirable production street Corvette of all time. Vette

The provenance lined up on this 1969 Corvette as a real black, 435-horse (L71) convertible, as verified by old photos and documentation.

The L71 is a numbers-matching 427. It had been off the road for 25 years. Jonathan pulled the plugs and lubricated the engine with Mystery Oil. He took it to noted L88 and 1969 Corvette expert Tim Thorpe to get the 427 started. Tim fixed the gas tank leak and rebuilt the carburetors and the 427 fired right up.

After taking a weekend to clean off all the old dust and dirt, it revealed a nice survivor example 1969. Jonathan says, “The car cleaned up nice, with that original interior smell.” There is just something special about finding an original, left-alone Corvette.

If fate had been more kind, this triple-black 1969 L71 convertible would have been a triple-black ZL1, something the hobby could sure use today.

The original buyer had the OK from the Chevrolet dealer to build a triple-black 1969 ZL1. Fortunately, he checked the boxes for the potent 435hp RPO L71, convertible and factory black finish, making this Corvette one rare find.