A guy named Cherniak goes hard-core on a budget 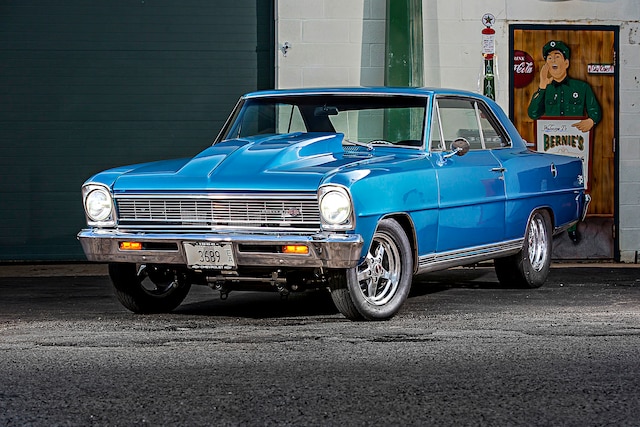 In a nutshell, this is what happened with Todd Cherniak’s Nova. “My neighbor Glen Dixon put a one-piece floorpan in it. My wife, Stephanie, helped me put the motor and the rearend in. Car runs on pump gas. I drive it to work a lot. We love to take the kids cruising in it.” More on the cruising part later.

Todd’s a working man, someone who knew he’d have to go it mainly on his own but also knowing he’d have the support of those close beside him, as well as his accumulated expertise. He began his trip into history when he was 16 and hungry, put a toe in the doorway and flexed the ropes by working at automotive shops where he experienced every dirty facet of the automobile.

As for the Nova: “I’ve wanted one since high school. I knew the guy who owned it previously. We’d gone to car shows together. Then he passed. When I was at the funeral, I was talking with his brother who said that he knew how much I liked the car and asked if I wanted to buy it. I did and I sold my motorcycle to get it.”

By Todd’s estimation, the Nova was only in fair shape but still it was a driver. So in the beginning that’s what he did. He put up with the ossification and with the slow death evident in the sketchy floorpan and a few other places. But the body was in remarkably good condition and had been painted Marina Blue by some unknown spray wizard. With the threat of paint jail and all the other things associated with it eliminated, Todd channeled all his funds and energy into the mechanical stuff.

He knew that most aspects of the build would require a budget. There would be no chassis swap, high-dollar suspension system, giant brakes, or monster wheels because this wasn’t to be a Pro Touring suggestion or anything like it. He wanted to accelerate in a straight line so his money was marked for a drivetrain enhancement.

He sent the 400 small-block to Coil Racing where a clean-up poke with the boring bar increased displacement by 9 cubic inches. Then came the 11.0:1 pistons and forged rods fitted to the original cast-iron crankshaft. The engine would be naturally aspirated and without a nitrous oxide power-adder in between. Profiler 23-degree cylinder heads, FiTech electronic fuel injection on an Edelbrock plate, Erson solid roller camshaft, and a free-flowing exhaust system blowing through Flowmaster 40s comprise the pie … and Todd made sure to lend a hand in the assembly process.

How to absorb engine output was first in his mind. He figured the best way to meet this challenge was with a stout Turbo 400, but without an overdriven top gear, driving the open road would soon become nervous and harrowing. Jim’s High Performance Transmission over in Mundelein, Illinois, built the thing with a manual valvebody and a Hughes converter. Solving the extra-gear yen was easy; they’d just hang a six-speed Gear Vendors unit off the back of it and sail down the highway with decorum.

Because the automatic transmission would apply torque gently (as compared to the violence of clutch release) the remainder of the vital link would be a thoroughly modified 12-bolt rather than the parasitic loss associated with the 9-inch type. Nor would the chassis need a war chest of Pro Touring appointments.

A Heidts SuperRide front end replete with spindles, control arms, coilover springs, antisway bar, and rack steering got settled between the rails. Todd admitted that this modification was a little more challenging than he’d first thought. Putting up the back gear was a much simpler exercise: monoleaf springs monitored by Calvert bars, Viking two-way adjustable dampers, and a Heidts Panhard rod. In its decidedly drag race stance, Todd upped the visual quotient with Mickey Thompson 26x6.0 skinnies and 255/60 stickies that he put on shiny five-spokes.

If you didn’t know what Todd was doing and you woke up inside the Nova, you’d swear you were sitting in an interior straight off some assembly line. The aftermarket gauges and Eddie Motorsports steering wheel hardly detract from this but the word austere comes to mind; budget breaking comes to mind. There’s no high-end sound system, or any sound system at all. You’d think that maybe there’d be a switch to turn on the refrigerated air compressor but there isn’t. Todd roughs it, revealing his constitution and his solidarity with the Nova’s roots, just like it was in the old century.

More on the cruising part. What was his most memorable experience in the Marina Blue pile? “My wife and our six-month-old daughter were on a country road on our way to a car show. I’d put slicks on it. I decided to see what it could do from a dead stop. It hooked up great on one side and before we knew it we’re door-deep in the cornfield. There was no damage done, thankfully, and we pulled back onto the road and went to the car show. We laughed all the way home.”

Yeah, maybe it was just like the old days. CHP