Though it looks it, John Gentry’s X-body sure ain’t done yet 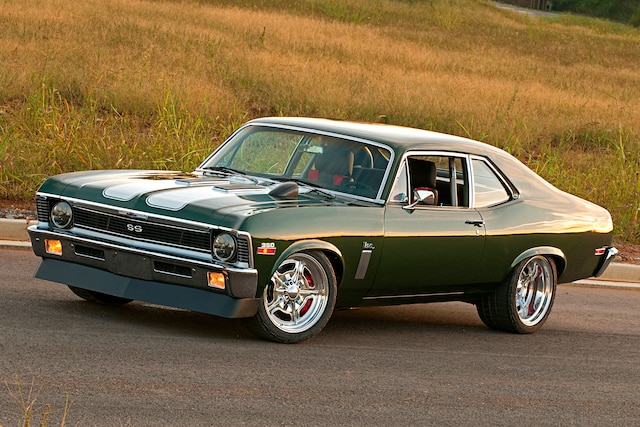 No matter what, you can’t escape the past. Like trying to get away from sand in the Sahara. It can’t be done. Just like if you posted on social media or put up an email, it stays out there forever. And somebody else will always remember. First cars are like that, too. You lust after something long enough and it soon becomes a part of you, and then one day the mark becomes indelible.

The car-dawn was breaking for John Gentry 35 years ago. He was a high school kid with his first ride: a 1972 Nova with a green and white exterior, and that was memorable. The 307/’Glide sandwich shaking between its fenders was not, but if he didn’t know it then, his lot was a foregone conclusion. In 1989, John sold the Nova ... and joined the Navy. Along about 1992, he discovered his current project slouching against a garage in Niles Canyon, California, and for $1,700 he was allowed to drag it away and into a secure, structured environment.

Right away, though, there was some contention: His best friend Jim declared that he’d been ripped off but John couldn’t see it. “It wasn’t perfect,” he defended, “but was in very good shape for a car that was 20 years old. It was original except for the Turbo-Hydro transmission swap.” He promptly blew the engine up and swapped out the mangled junk for a 400-cubic-inch small-block.

“It was my daily driver … until it started needing things like, you know, parts, gas, and money, all of which were non-existent in my early days. What I really needed was a reliable everyday driver. The Nova went in the garage [several of them, actually] and never moved.”

Forward the motion a decade or so and John was 7,500 miles away working in Iraq. He had time to think about stuff that had nothing to do with his livelihood. So he went into his head and built his dream car there. He ordered lots of parts. “I found Detroit Speed while trying to figure out how to put bigger tires on without it looking all chopped up. Retaining the factory look was very important to me.”

2013 was a big year for John Dog. Goodguys had a show in Nashville, right there in John’s neighborhood, really. While he was there, he wangled an autocross ride in Dan Ballard’s ’72 Nova. Had a blast, he said. What could be better than being able to experience the fruit of his goals before he actually jumped in it with both bare feet? It was an auspicious occasion. “I met Jesse Greening [Greening Auto Company, Cullman, Alabama] and we decided that we could work together. I decided then to build my ultimate street car. “I really liked everything about the handling and performance of the Detroit Speed product line. The QUADRALink stuff came first, along with mini-tubs to fit the 315 Rivals that were stuck on 11-wide rims.”

Two more years pass and he’s talking to Greening again about the next phase, which includes a Detroit Speed subframe, spindles, and rack steering with a tight ratio. Greening planted double-adjustable Detroit Speed/JRi coilovers and splined antisway bar. At the rear, the Detroit Speed four-link is backed by an antisway bar, a Panhard rod, and Detroit Speed/AFCO double-adjustable coilovers. To enhance the whole and button up the shirt real tight, Greening Auto lined the Nova’s interior with a RideTech TigerCage. The next steps were the Detroit Speed water-formed subframe and frame connectors. Then, after it assumed the position on a spit, scouring and painting the underside. So John had a very capable, very cool roller. He and Greening mused about the powerplant. Rather than build a bomb from scratch, it would be a very strong engine that required no work at all. They didn’t need to go any further than a wet-sump LT4 crate engine. The six-speed TCI automatic is based on a 4L80E case, but all the internals are replaced with TCI parts and engineering. Certainly out of the ordinary, but its controls are even more so: gear changes can be made manually by moving the usual lever, or met with a FAST-controlled TCI paddle shifter.

When we wrote this, John was “shaking it out, tuning it, and enjoying it.” Recently, the rollers revealed 501 horsepower and 475 lb-ft. Since that blower engine is officially rated at 650 hp/650 lb-ft at the crank flange, there’ll be a bit more shaking out. Since the bottom end is ready for a whole lot more, the option would be forcing it for additional positive manifold pressure.

“I still have a long way to go and at least one more phase to finish the build,” said ol’ Johnny. “If there was a challenge, then I’d say the most challenging part of it was cash. If I did it over again, what would I change? Not too much ... check back at a later date.” Okay then, John. We’ll go for a coupla beers and a coupla burgers—and kick them up a skosh with those troublesome little yellow peppers we told you about. You in? CHP

How To Splice and Weld a Partial Panel Replacement