Fiberfab 1954 Corvette Brought Back to Life 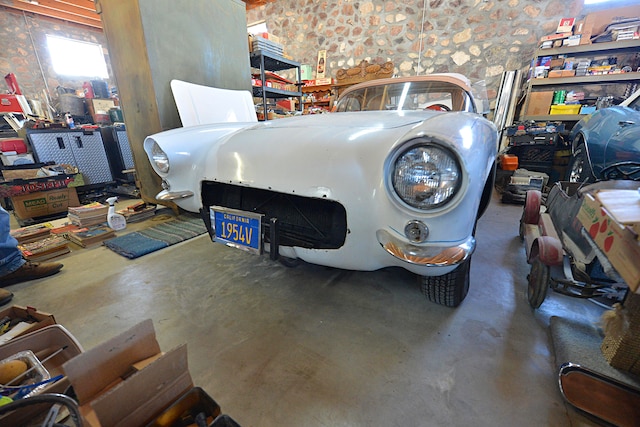 The front clip of this Corvette appeared to be a ’56 or a ’57, but the top and back end was unmistakably 1953-’55. As we walked closer, the tops of the fenders over the headlights were clearly not stock. What was this old Corvette?

Farmington, New Mexico, was 485 miles away from El Paso, Texas. Eddie hooked up a trailer and drove 7 or 8 hours to pick up the 1954, parked inside a single car garage attached to a small house.

The more Eddie looked at the Corvette, the more he liked what he saw. Anybody could have a stock 1954 model with a Blue Flame Six and a two-speed Powerglide automatic. Exactly 3,230 were Polo White of the production run of 3,634, so nothing out of the ordinary on the color. Eddie recalls the seller telling him “it was his dad’s car and his dad had some kind of business around LA and he did some road racing with it.”

Most evident was the modified front end, obviously done many years ago. Inside the car, Eddie found an old ad from Fiberfab that read, “Upgrade your 1953-55.”

Williams also appreciated the vintage pinstriping that he figured were made with “those old pinstriping hand tools,” clearly a lost art.

The original Blue Flame Six was still under the hood. A V-8 would have made more sense for a racing heritage. Why was the valve cover painted orange? Later, Williams found in a reference book that some 1954 Corvettes did come with an orange valve cover from Chevrolet. In place of the original wheels and hubcaps were “funny little racing wheels,” that look like a set of vintage TorquThrusts. They are 14-inch. The stock steel rims were 15s.

“They changed the two-speed Powerglide to a three-speed and what looks like a hand-fabricated shifter.”

When Eddie got the 1954 home to his backyard hobby shop, he changed the fuel pump to get the 1954 running and has left the car “exactly the way I found it.”

“I think I put in a new rotor (distributor), freed up the carburetors, and started it.”

Parked between other vintage cars in Eddie’s backyard car hobby shop, the 1954 appears today as it did 18 years ago, with the exception of “a couple of emblems that were about to fall off.”

“I would have liked it either way, original or the way it was,” Williams said.

Eddie Williams did not feel a need to restore the car to enjoy the experience of ownership. He had no intention to sell. These last 18 years he has enjoyed owning the 1954 Corvette as is. Restoring the roadster would cover over that mystery that adds a level of intrigue. Maybe a reader has some information to offer with an email to jerryheasley@gmail.com. Vette

This 1954 is proof an enthusiast can enjoy a vintage Corvette as is.

“It has those original California license plates,” Eddie said. They help back up the story of this 1954 that goes with the car.

This “little racing steering wheel” of unknown heritage was on the car.

Eddie liked the old style pinstriping. The old Torq-Thrust wheels had Shelby center caps, another possible clue to the heritage.

The shifter appears to be hand-fabricated for a three-speed.

With the Corvette came this old business card (no zip code), so prior to 1963. Did this shop work on the car?

A new top on this old original looks odd. Al Knoch (Al Knoch Interiors) used the original top as a pattern for the convertible tops he sells. “Once he took the top apart, he wasn’t able to reuse the old top.”

Vintage Fiberfab front end is a trophy for Williams, as is the vintage pinstriping, seen on this fender top.

What vintage and make are these old side mirrors?

This 1954 Chevrolet Corvette gets its inspiration from little bit of everything: part restoration, part prototype and part restomod.