Father-and-Son–Built 1967 Nova Brawler for the Street!

Father/Son team create a killer Nova for the second time 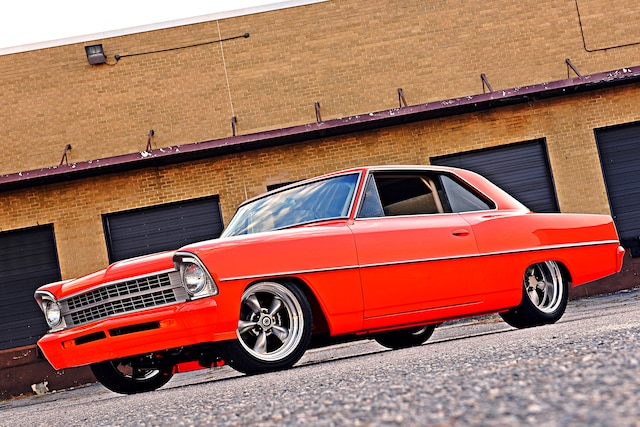 Thirty years ago, Scott Hughes set out to build himself a Nova for the ages. It was the ’90s and Scott used every trick in the hot rodder’s bible to fabricate himself one solid Pro Street-styled Box Chevy II. It immediately got the attention of not only just about everybody at the local car shows, but also grabbed the eye of the national auto media outlets as well. Soon his wild new build found itself in and on the cover of some top-notch muscle car publications, including this kick-ass magazine you’re reading right now.

That Nova was Scott’s total dream ride, put down on paper first and then transferred to a willing ’65 body. It kept him busy through the years with both upkeep and upgrading, and served him well out on the street. As the years progressed, Scott got married and raised a family, and the time for building wild Chevy hot rods dwindled. But once son Brian was born, well, Scott knew that one day the twosome would be designing and building high-power hot rods together as a team.

When young Brian turned 14, Scott decided to help him procure his first car. Being the owner of his own speed shop, S/W Performance in Glassboro, New Jersey, and having Chevy blood running through his veins, dad wanted to make sure that his son’s first ride was a car that they both could be proud of. So Scott figured a sporty compact Chevy was the way to start off young Brian’s foray into muscle cars.

It didn’t take long before Dad found what he was looking for: a ’67 Chevy Nova that needed some love. Since Brian was three years away from being a legal driver in New Jersey, Scott figured they had plenty of time to transform this beaten ride into a hot rod fit for a first-time driver. So Brian and his buds went ahead and disassembled the car, taking it down to its bare bones to see what they were working with.

What they found was the typical New Jersey crust and rust that most cars in the Garden State form over the years. The crew procured quarters, fenders, and doors for the car while the mill was built. A nice 400ci small-block backed with a Powerglide transmission was now ready and waiting while the rest of the car went through its metamorphosis.

However, the car would soon be put on hold while Scott and Brian pondered its future. Then the guys decided that this car would be more fun as an all-out quarter-mile bruiser, destined to run NMCA Open Comp class with 10-inch tires. So an NHRA SFI ’cage, full frame, and suspension was installed in the Nova by Advanced Metal Craft in Vineland, New Jersey, to shore up the safety requirements. They then smoothed out the firewall and added a trunk area bellypan to complete the sleek look.

But once again the guys shifted gears. After that idea lost steam, they decided to once again make it a street car, using Dad’s killer Pro Street-styled Nova as the inspiration for this new build. So the boys hunkered down and put the project on full steam ahead to build one killer street burning Chevy Nova. Game on.

The body needed some work to make it all look right, so the boys replaced all the needy sheetmetal on the car. Besides the firewall, they added some custom touches to the body to make it stand out. Recessed door handles were added and built around modern GM passenger car pieces. The bumpers were smoothed and narrowed, the tag mount area was removed and smoothed, and a 2.5-inch metal valance was added. The fenders were then extended to match up with the bumper. Last off, the wipers were removed and the cowl was smoothed for a clean look.

The chassis needed a little love as well. There, the guys installed an S&W Race Cars ladder-bar rear suspension with Aldan adjustable coilover shocks. Up front, the Nova got a Heidts Mustang II crossmember with tubular upper and lower control arms and a manual rack system to keep this Chevy pointed in the right direction. It’s finished off with a set of Aldan adjustable coilover shocks to give the hot rod the ride the guys needed.

To power the Nova the guys switched gears and decided that a big-block was the only way to go. Starting with a Gen VI 454 block with a stock bore, they added an OEM steel crank and rods and TRW pistons to the rotating assembly. They then topped off the cylinders with a set of GM square port heads. A combination that worked out to a healthy 11:1 compression ratio. Up top they added an Edelbrock Victor series intake along with a 750-cfm Holley Dominator carburetor and custom air cleaner to keep this big-block fed the fuel and air it needs. A Mallory Unilite electronic distributor adds the spark, which is sent through a set of American Autowire OEM spark plug wires. A Performance Rod & Custom radiator keeps it all cool.

To send that power out to the rear wheels, a B&M TH400 Street/Strip transmission was chosen to shift the gears. It’s set up with a B&M HoleShot 3,000-stall converter and B&M cooler to keep it all in the right temperament. All this goodness feeds a Ford Motorsports 9-inch posi rear stuffed with 3.70 gears. Moser 33-spline axles feed the power to the big meats out back.

Stopping power is supplied by front and rear two-piston Wilwood disc brakes. This wild ride sits on American Racing Torq-Thrust II wheels: 17x7 up front and 18x10 out back. The latter are skinned in Mickey Thompson Sportsman 28x12.00R18LT meats. Spent gasses are removed by a set of Hooker headers flowing into a pair of Flowmaster 40 Series mufflers. An RCI safety fuel cell handles the go juice.

Wiring up this stealthy Nova was accomplished by installing an American Autowire Highway 15 kit. To clean up this build and to make it stand out, the guys went one extra step. All wiring and plumbing are throughout passenger compartment, rollcage, and frame. No wires, hoses, or steel lines are visible under the car.

The interior got a dose of love as well. First off, a set of Procar seats were installed for that race car vibe. Next, a set of AutoMeter gauges were added to the mix to keep track of the necessary vitals. Simpson FX latch type safety belts continue with the look, while adding safety to boot. A Grant 989 Series wheel tops an ididit steering column to complete the cockpit of this sweet ’67. Action Rods in Williamstown, New Jersey, stitched the period-perfect tan interior.

All sheetmetal and bodywork was done in Scott’s home shop. The stunning Hugger Orange paint was laid out to perfection by Street Rods by Michael in Shelbyville, Tennessee. The design of this wild box Nova and its final fit, assembly start up, and repair was done by Scott and Brian out of Brian’s own New Millennium Rod and Kustom shop in Elmer, New Jersey.

Finally, after years of cutting, welding, fabricating, and assembling like clockwork, this orange Nova was ready to hit the street. And the guys are quick to admit they didn’t do it alone. This father/son project spanned 16 years, and was helped along by some great shops and close friends. Now, the once-teenaged Brian is 32 and who knows, maybe his kids will be driving this ride one day.

“It’s a backyard-styled build. We say it’s a 1990’s re-creation,” says Scott. No matter what it is, this is one clean, heavily built street machine ready to do some damage out on the blacktop. The Nova was completed in October 2017 just in time for the fall Ocean City, Maryland, car show. The Nova then made an appearance at the Super Chevy event in Maple Grove the following year. Wherever it goes, it gets a standing “nov-ation” from all the onlookers. It’s definitely got that ’90’s look and feel, and these guys just wouldn’t have it any other way.