Detroit Speed’s newest 1969 Corvette project has to be seen to be believed! 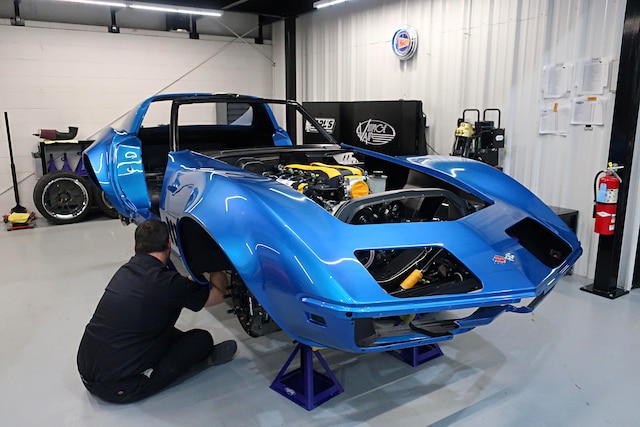 Bob loved his ’69 Corvette, but, while it was in excellent shape, it was nearly stock and the handling was less than ideal. This became even more evident once he decided he would like to hit some serious track events, such as the Optima Ultimate Street Car series and the epic One Lap of America series.

So, to transform his sweet-but-stock Vette into a corner-carving monster he hit up the craftsmen at Detroit Speed in Mooresville, North Carolina. After blowing the ’69 apart one team started working over the body while another tackled the chassis, suspension, and driveline. The frame was stripped bare and outfitted with the best C3 Vette parts DSE has to offer, including their new SpeedRay front suspension. For brakes, massive AP Racing Pro 5000 binders were added to each corner.

The engine is a worked-over LS7 feeding into a TREMEC Magnum six-speed, which sends copious amounts of power to the aluminum differential that’s part of the Vette’s new DSE IRS system. Feeding the hungry LS is left to an ATL fuel cell along with a host of Holley fuel parts, and the engine exhales through custom stainless headers and side pipes.

For comfort there’s a Vintage Air A/C system and for safety there’s a custom-crafted rollbar along with a fire suppression system. Keeping track of the vitals falls to the Classic Instruments (AutoCross series) gauges. After flares were added to house the wide Forgeline wheels wrapped in massive rubber, the Vette was shot in a stunning blue hue and polished to perfection. Bob wants to keep the classic vibe so trim, such as the rear luggage rack, was kept in the mix. To tame underhood temps, the DSE team added a hood vent and trimmed it with a one-off aluminum bezel. This is one project we’re dying to see in motion. To see more, check out the projects section at detroitspeed.com.