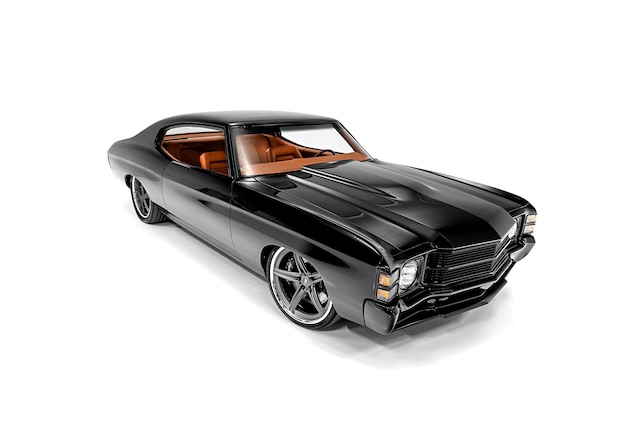 Months before he got his New Jersey driver’s license, teenaged car aficionado Tony Roscigno was already searching for his first ride. It was on an excursion to Hershey, Pennsylvania, that the young gun made a bid for what he was ultimately looking for. The object of his affection that particular weekend was a black-on-black, four-speed ’69 Chevelle. “That car just oozed coolness,” says Tony. Luckily, the teenager didn’t let the sleek A-body get away; he snagged her for his very own.

Back home, he immediately got to work on his new, prized A-body. “We redid the motor, transmission, interior, sound system (it was the ’70s), and got it ready for the street,” says Tony. Five months after officially getting his license the Chevelle was on the blacktop, ripping up the local roads under Tony’s “right-hand command.” However, it didn’t take long for the young gun to find trouble, or interestingly enough, for trouble to find Tony.

While cruising the neighborhood streets, a panel van cut Tony off and forced him into oncoming traffic. He was hit head-on by a pair of cars headed in the opposite direction. The cops accused Tony of hot rodding it up, but several eyewitnesses said otherwise. “Being a smart-ass 17-year-old didn’t help the situation,” says Tony. Sadly, only two things survived the Chevelle’s unexpected crash test: the Hurst shifter handle and Tony’s set of keys. It was a total loss.

His second foray into Chevy ownership didn’t work out well either. “After I totaled the Chevelle, I built a ’71 Z28 Camaro. It was Canary Yellow with black stripes, built with a 327 mated to an automatic, and sporting an L88 hood and Cragar deep-dish wheels,” says Tony. After a while he sold it to a good friend, who then proceeded to drive it off an exit ramp, totaling the car in the process.

After that, Tony decided to take a break from building cars and key on his career. “So I did what any self-respecting grease monkey would do in 1979 ... I became a golf pro,” laughs Tony. After a few years on the links, Tony went back to school, got a real job, and got married.

Load Er Up
Flash forward 32 or so years. Tony becomes a big fan of MotorTrend TV and a certain hit show, Speed is the New Black. He loves the quality builds coming out of Classic Car Studio (CCS) and the camaraderie of its crew. He starts to think about how that first Chevelle got away from him and how he’d love to have a furious and fast ride back in his garage. “I do a fair amount of business in St Louis, so on a trip there a year ago I went to visit CCS. I met up with proprietor Noah Alexander and General Manager Charles Crews. I told them my twisted tale about my first two cars and their demise,” says Tony.

The trio talked about cars and about how Tony thought it was time to have some muscle back in the garage. “I wanted a Chevelle because it was my first car when I got my driver’s license. I only had it a short time and I always wanted to do it again when I had the time and resources. Now that the kids are gone and taken care of, it was time for me to have some fun,” declared Tony.

So then Tony dropped the big question; could they build him the dream Chevelle he desperately needed in his life? After telling Noah and Charles about what he wanted in his Chevy, the boys from CCS agreed that this wild Pro Touring, big-power ride that Tony thought up would be a perfect fit for the CCS team. So a deal was struck and the stage was set to build Tony’s dream car.

Build Er Up
So CCS started an all-out search for the perfect donor car from which to create Tony’s dream ride. After some long hours scouring the area, they finally hit gold. Believe it or not, it was right under their noses. “One of their customers started a restoration of a ’71 Chevelle and decided that he couldn’t finish the project. So we made an offer and it was accepted,” says Tony.

Once the deal was consummated, the Chevelle headed over to the shop floor for its teardown. Once on it, the crew drew up a game plan on how to build Tony a kick-ass, pavement-chewing Chevy street machine; one with an aggressive stance and a mega-pissed-off attitude. Dinggg. Let Round Three of the Tony/Chevy matchup get underway.

Their Chevelle of choice was a great starting point and also came with two good fenders. “Since we had planned on running a new chassis and drivetrain, we were only really looking for a solid body with original trim, which this car came with,” says Noah. Once they removed the Chevelle’s chassis, the crew set the body aside and keyed on the underside of this soon-to-be-wild ride. “We often find that we are competing against more modern performance cars, so we chose a chassis with a trick IRS setup to try and keep up with the sports cars the owner had become accustomed to,” says Noah. An MRC Fab chassis with an independent rear suspension modified by the crew at CCS became the backbone of this build.

To that chassis, the crew added front and rear Viking coilover shocks. To bring this ride to a stop, big 14-inch Wilwood discs handle the duties at all four corners. A Ford 9-inch rear with a John’s Industries third member handles the power output to the rear wheels. The team decided on B-Forged wheels: 20x8.5 up front and massive 20x12 rollers out back. They’re shod in Pirelli P Zero tires: 245/30ZR20 and 335/30ZR20, respectively.

As for the body of this street sweeper, the customer asked for a few key features. First of all he was looking for a “clean and mean” look. “No side mirrors and no chrome,” says Tony. Secondly, it just had to be black. There was no budging on these two points, and CCS was just fine with that. The team forged on, trimming the front and rear bumpers to make them hug the body a little tighter, then fabricating a subtle chin spoiler as an extension of the front bumper.

Other pertinent parts and pieces needed to be fabricated to give the Chevelle the look that both CCS and the customer wanted. The metal fab team went to work channeling the chassis through the body in order to get the Chevy down low, and make the stance just right. They also fabbed up new floors and then went to town constructing the massive rear wheeltubs to house the Chevelle’s meaty rubber out back. A smooth and simple firewall was fabricated that cleaned up the back of the engine compartment.

Since the boys were going to baste this killer A-body in the blackest of all black paint, this Chevelle’s flanks had to be laser straight, which handed the crew at CCS a huge challenge. Of course, CCS rose to the occasion and conquered this task without a hitch, painstakingly perfecting the contours of this beast with countless hours of block-sanding its panels. Next, CCS sprayed the Glasurit Black base and the five coats of clear on its flanks, which made the paintjob appear a mile deep and as black as liquid coal.

Power Er Up
As for the motor-vation for this sculpted Chevy, CCS did not skimp one bit. “The customer had wanted an improved version of his old car and was looking for modern tech throughout, so we choose a Chevy Performance LS9 for the engine and a TREMEC Magnum six-speed for the tranny,” states Noah. At 650 hp right out of the crate, this mill had enough power to eat up some tarmac, while being tame enough for local cruise-ins and car shows. Since these LS engines don’t have the cleanest look stock, the crew at CCS decided that to make it all look cohesive, they would create a slick, sheetmetal engine cover for the powerplant. This piece was fabricated to flow into an engine compartment surround, which helped hide the radiator and intercooler components, and helped to tidy up the ample space underneath the hood of this Chevelle.

As for the interior, the goal for CCS was to create something that was timeless and clean. “I also wanted to add some styling cues from my late-model Ferrari to the mix,” says Tony. The crew went with his concept and got to work. Recaro seats were picked for up front and they were chopped to keep with the interior’s flow. Custom rear seats match the styling on the front buckets. Carbon fiber was used to create gauge surrounds as well as a center console insert. Tunes come to this ride courtesy of Kicker Q Series components, which are set up to rock as hard as this meticulous car does. The final add-on to the interior, Tony’s original Hurst shifter salvaged from his first Chevelle.

The build was documented for all to see on MotorTrend’s Speed is the New Black TV show. Since then, the slick black Chevy has garnered accolades wherever it’s left its rubberized footprints. “I wanted a badass, pissed-off looking Chevelle, and that’s what they delivered,” says Tony. Special thanks go out to Tony’s wife, Anette, who gave him the green light on his much-needed project, and, of course, to Noah, Charles, and all the crew at CCS. “This Chevelle kicks ass and it’s loud; just the way I wanted it,” says Tony.

An Inside Look at Roadster Shop’s Fast Track Chassis