After doing for others for so many years, shop owner Chris Holstrom finally does one for himself 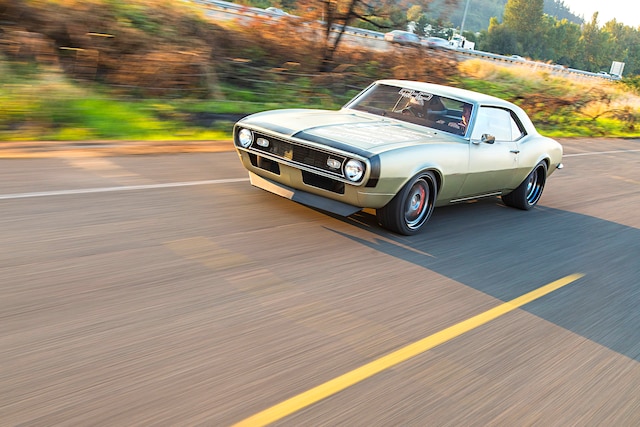 “He who makes shoes goes barefoot himself.” Though the proverb isn’t as common as it was in the 17th century when it was first recorded, the idea is enduring. Those who do for others seldom have the time, money, or both to do for themselves. It explains why so few car builders have a functional hot rod of their own.

Chris Holstrom hasn’t had a personal project—at least a running, functional one—since 2008, the year he sold his 1968 Camaro to establish his company, Chris Holstrom Concepts. The number 10 has a kind of significance to it, especially when rendered in years. “I was sick and tired of not having anything of my own,” he laments. So in early 2018, he took action to get back what started him in the business in the first place.

Two purchases later (the first was actually worth more to sell than to modify), Chris happened into a former bracket racer. “Man, it was perfect,” he recalls. Built sometime in the very early ’80s, it escaped at least three decades of exposure. It also had the perfect finish, a kind of brackish metallic teal with a dark blue stripe. It was a finish that looked presentable yet wasn’t too precious. “It was totally ’80s,” he recalls. And for the record, Chris doesn’t just like the ’80s—he loves them.

“I had enough stuff that we’d taken off other cars that I could build up something pretty quickly for not a whole lot of money,” Chris continues. An update of another Camaro yielded an early aftermarket subframe and suspension. A repower produced a good 6.0L truck long-block. Someone had a line on a supercharger and the 12-bolt in the car already was a good starting point. “It didn’t need any rust or bodywork so I figured I could throw something together in a few weeks,” he says. In fact, he set himself a generous 16-week timeline, a figure chosen largely to invoke an age special to anyone who grew up around cars. “I wanted to have something kind of like what we all wanted when we got our driver’s license. Kinda like, sweet sixteen.”

You know things never quite work out as planned, and one look at the color on the car proves it. It’s the rear suspension’s fault. “I didn’t have anything (for the rear) so I was looking around,” he says. That’s when he caught wind of Speedway Motors’ G-Comp line of muscle car suspension systems. “Speedway was just about to come out with the Unser Series and the torque arm setup looked perfect,” he says.

Of course, the rear suspension outclassed the front so he stepped up and invested in both ends (we covered the installation of the front in the April 2019 issue and the rear in the July 2019 issue). That led to a close relationship with the company and talk of Chris campaigning his car on the autocross circuit under the Speedway banner. But the higher-quality chassis and suspension work had unintended consequences. “I knew I was going to be the face for Speedway at events but I don’t think people would understand why the car looked kind of sloppy. That was fine for me but it just didn’t make the best impression from a business standpoint.”

At the same time, an ultra-high finish was out of the question. “A lot of my customers want that super-nice look, which is great for them,” Chris says, “But it’s not for me and definitely not for a race car. I knew that autocross was going to be hard on the car and I didn’t want to have to worry about beating up a paintjob that I can’t afford.” So in-house painter Josh Jones worked up a light-grade patina-style finish based on a tuned-up version of a Honda gold. “Yeah, I know the patina thing is overdone,” Chris admits. “But it’s perfect for a car you want to drive more than clean. We set things on the roof or hood all the time. We lean against the fenders and we even dented the quarter-panel at the track. If I had $30,000 in paint, I’d a had a heart attack!” But with the “wear” built into the paint it’s difficult to spot any real damage.

But the remainder of the build remains true to Chris’ rational budget constraints. The only reason Troy Green tore the iron-block 6.0L down was to inspect everything and put it back together with stock bearings and rings and a Comp cam (stock pistons even). A set of LS3 heads doesn’t cost much more than rebuilding the stock heads but they yield way more power, so that’s what’s on there.

About the only extravagance was the FiTech Ultimate LS3/L92 induction system. “It just didn’t make sense to piece together stock injection,” he observes. “When you start considering that your time is worth money, you realize that the time it would take to track everything down and the additional tuning would’ve eaten up any savings.” Case in point, they could’ve driven the car to Eric Armstrong at Armstrong Automotive for what little dyno tuning it needed to accommodate the boost. “It fired right up and ran fine,” Chris states. And despite only 4 psi of boost (the ProCharger D-1SC came off a smaller mill so it was underdriven), the engine made 540 lb-ft at 5,200 rpm and 577 hp at 6,400 rpm. Chris has since swapped the pulley out for one that makes a modest 8 psi. “It made plenty of power before,” Chris admits. “The boost just came on too late. Now it’s instant power. You have to be careful because it’ll blow the tires off the car,” he says with a grin.

Soon after getting the car roadworthy—in half of the 16-week schedule, we might add—he debuted it at Goodguys’ 27th Speedway Motors Heartland Nationals in Des Moines. There it underwent basic chassis tuning by the Speedway crew. The car weighs 3,295 pounds and has nearly 50/50 weight distribution. It also has a near perfect 49.8 percent diagonal distribution (that’s left-front/right-rear vs. right-front/left-rear). The car returned a week or so prior to this photo shoot. And literally as we finished the shoot, Nate Pierce was tearing what little of the interior remains out of the car to fit the ’cage to prepare for the Muscle Car Challenge hosted by sister publication Super Chevy. Upon its return from that, it goes to Tony Miller at Stitches for a minimal interior to make the car just a little bit civilized (the pipes now extend to the rear of the car making it almost quiet inside by comparison). Because right now, the only thing in the cockpit are Dakota Digital HDX gauges and an American Autowire Classic Update harness.

But even in its more refined state, Chris’ dream car is still a far cry from many that he builds for his customers. And more than all right with it, Chris gently nudges clients to take a few cues. “With the parts available today we’re able to build cars that really perform,” he observes. “But most will never get used to even a fraction of their potential. When you make a car that nice, people are afraid to actually have fun with it and it’s really too bad.” He’s also leading by example … literally. In August 2018, he led a caravan of his customers across the Cascade mountain range to the Goodguys Great Northwest Nationals in Spokane. “I want to get people to actually enjoy driving their cars,” he says. “Sitting around dusting off your car all day or worrying about something happening to it, that’s not fun. But we had a ton of fun that weekend. Guys were taking videos chasing and passing each other. It was great.”

Chris admits it was his high expectations as much as anything that kept him out of a personal car for so long. “A lot of our customers spend a lot of money building perfect cars and it’s easy to get caught up in that,” he says. “Then I realized I wanted something that I could throw the kids in the back seat and go for some froYo,” he adds. “Something I could go out and have fun with.” So even if someone gives him an offer he can’t refuse on his pet project, we can’t imagine it taking so long to build another. In fact, we’d give him about eight weeks. CHP