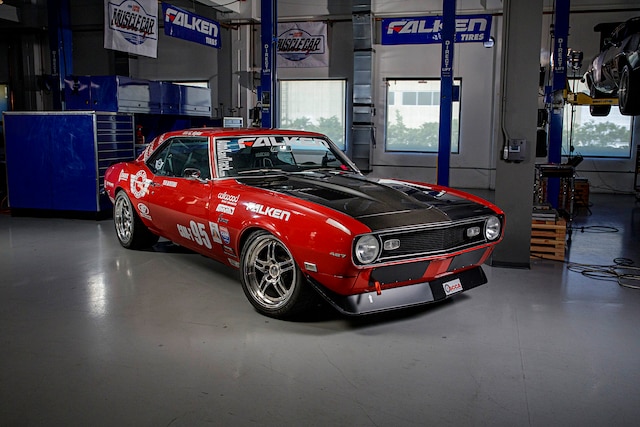 If there was one gauge in the dash that could measure fun, what would it be? Would it measure adrenaline-inducing rpm? Seat-pinning boost? We’d argue that such a gauge already does exist in every Chevrolet muscle car. Its readout is glanced at often, but without fervor. It’s the odometer; an hourglass into road trips, track time, and memories. If any gauge were a real-life fun-ometer, this is it.

For Chad Ryker and his ’68 Camaro, the odometer ticks upward on a nearly daily basis. It’s a timeline of the many events he’s competed in and won and cherished family memories.

This year, in addition to the Optima Challenge series events, SCCA events, and copious street miles Ryker tacked onto his odometer, he included the 2018 Super Chevy Muscle Car Challenge presented by Falken Tires.

Once every year, Super Chevy hosts a put-up-or-shut-up style suspension challenge and invites suspension manufacturers to show the world what they’ve got. It’s an all-inclusive shootout that tests suspensions of all styles, cost tiers, and ideologies and puts them to work on a road course, slalom, and 100-yard dash. Like last year’s event, the 2018 Muscle Car Challenge took place in sunny Fontana, California, and had a great turnout of awesome manufacturers ready to go toe-to-toe, tire-to-pavement, and pedal-to-the-metal to prove they are just as hard core as their customers. Ryker’s car represented Team Wilwood Engineering.

Car and Driver
Like most of us, Ryker’s obsession with cars began in his early years. “My gateway to cars and hot rods was growing up with a family ski boat that was a jet boat from the ’70s with a 455ci Olds in it,” he said. “It was loud and noisy and cool.”
Always a fan of early Camaros, he purchased his ’68 in 2006 and has now owned the car for 13 years. “It was an abandoned project, painted but in a roller condition, that I did the mechanicals on,” said Ryker. “I did my first track day in 2009 and started getting into Pro Touring and making it handle. Eventually, I started getting more serious.”

Serious meant better, more competition-ready parts, and setting the car up to be a contender in series like Optima Ultimate Street Car and SCCA. Upgrades were completed in 2014 and in 2015 Ryker started racing the Camaro.

“It’s always been in the top four or five in points [in Optima competition] since I started doing three or more events,” said Ryker. “It’s podiumed in the GTV [vintage] class several times. I won GTV in Vegas at the opener last year and took second at Pikes Peak.” Ryker has put 41,000 miles on it since it hit the pavement in its current (third) iteration in 2015, 60,0000 miles since he started driving it in 2007. He drives it to work, to the track and back––once as far as Circuit of the Americas for an Optima event––and as much as he can.

“One of my favorite memories was bringing my daughter home from the hospital in the car,” he said. “She was crying; it was her first time ever outside. We put her in the car seat and as soon as I started the car, she was quiet. She didn’t make a peep the whole ride home, but as soon as I turned the car off, she was crying again.”

The Grip and Go
Ryker’s ’68 is first and foremost a driver, but its streetable nature belies its racing competence.

The car’s tunnel-vision inducing grip comes courtesy of a Total Cost Involved (TCI) Pro Touring IFS in the front and Torque Arm suspension in the rear. The thoroughly modernized setup uses performance-oriented geometry and extremely stiff components to help the car grip into the corners and plant the power on the way out. JRi coilovers sit at all four corners and aid in the grip-making magic.
Inside, the car features a TMI interior, AutoMeter Phantom gauges for monitoring engine vitals, and a completely functional A/C system and radio. It is, after all, a driver.

The Brakes
With 500 hp propelling Ryker’s Team Wilwood car forward and massive Falken rubber under each fender, stopping the Camaro is a mountainous task. The factory disc/drum setup had long since been rendered obsolete. To stay a contender in the ever-competitive Pro Touring world, teaming up with a brake expert like Wilwood was a must.

“Chad’s car has gone through three or four iterations of brakes,” said Mike Hamrick of Wilwood. “It started off as a street performance kit, but evolved into a track-ready Pro Touring brake system. It uses our GT slotted directional rotors, Forged Superlite internal crossover six-piston calipers with hard anodize finish, and a BP-30 pad material.”

The modern calipers offer extreme clamping power and stiffness due to their forged design, and the BP-30 material and insulated T1 Thermlock pistons help to prevent brake fade during prolonged high-speed blasts on the track.

“The two-piece, stainless/hard anodized aluminum pistons help prevent transfer of heat into the brake fluid,” said Hamrick. “And BP-30 is our staple material for all of our road course applications.”

In addition to the rigid calipers, giant rotors, and cutting-edge pad material, a floating hat assembly is also employed. This allows the rotor to thermally expand on its radial dimension independent of the hat. The rotor is attached by T-bolts that firmly clamp it to the hat, but allow it to expand and contract as it heats and cools.

“It keeps the rotor parallel to the hat as it grows so it doesn’t encourage piston knockback,” said Hamrick. Piston knockback occurs when the rotor face moves laterally due to play or an out-of-parallel situation (such as uneven expansion occurs) and causes the caliper pistons to be pushed back into the caliper. The next time the driver applies the brakes, the pedal must travel farther to move the pistons back, creating a panic-inducing feeling of brake failure–yikes!

It’s clear that Ryker’s Camaro is one heckuva contender, using great parts, a ton of technology, and input from all the right folks, but it also helps that he knows how to drive it. Check out the results to see how well the car fared against our baseline 2017 Camaro SS.