Blown 1999 Arctic White Corvette Coupe Will Give You The Chills

This blown Arctic White FRC will give you the chills 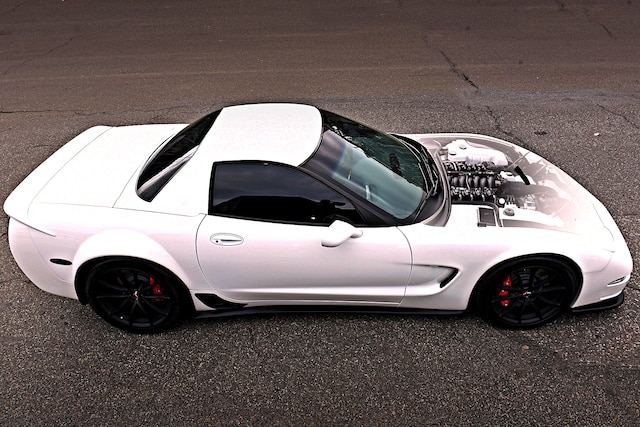 When you grow up in a household where not just one, but both of your parents are quarter-mile drag racers, well, the odds are that one day you’re gonna’ try to impress mom and dad and hit the 1320 as well. After being weaned in the pits of Englishtown and Island Dragway in New Jersey, it was only natural that the high-horsepower bug would soon bite Cliff Shemeley. The young gun’s main weapon of choice, well, it would soon become the Chevrolet Corvette.

Growing up a Chevy lover in northern New Jersey, you were bound to make a few stops at Malcolm Konner Chevrolet (MKC) in Paramus, New Jersey. Back in the day, MKC was one of the biggest Chevy performance dealerships in the country, catering to Corvette lovers that just couldn’t get enough of Chevy’s plastic performance car. If you needed a hot Corvette in the Tri-State area, MKC was the place to go and check out the inventory.

Cliff was no stranger to the dealership, and took the very short ride over there on many occasions. Back in 2001, he was looking for a new Corvette for his stable back home, and figured he’d run over to MKC for a quick look. A lightly used 1999 fixed roof coupe (FRC) immediately caught his eye, and without hesitation he spontaneously made a beeline for it. It was definitely something he was interested in. He wanted a sporty ride he could drive daily without the worry of it giving him issues. With a punchy LS1 under the hood, Cliff was taken with its sporty performance from the moment he sat behind the wheel. A deal was soon struck, and the Arctic White Corvette was coming home with him.

Now, from day-one this was Cliff’s daily driver. The sporty C5 saw the rain, snow and nasty salts that New Jersey is semi-famous for, and took it all in stride. Cliff didn’t mind using it as his primary transportation to work, but he kept an eye focused in its general direction at all times. Even though he ran it hard and often, he did his share to make sure that the local corrosives didn’t last long on the car.

It didn’t take long before Cliff got the modification bug from Corvetteforum.com, an online Corvette site. Little by little he added some go-fast goodies to the FRC, like a Vortex Ram Air kit, SLP 85mm mass air and a MAFT translator. Soon after, he started taking it to Raceway Park in Englishtown, New Jersey, to see what good his mods had done. He quickly became immersed in running his Chevy on the famous quarter-mile strip; making over 100 passes on it, and even got to entering it into the Corvette Challenge. More add-ons continued, like 4.10 gears with hardened shafts, a Cartek racing clutch and Corsa Indy Tigershark mufflers.

Wanting even more power and speed he then brought the car to Anger Management Racing in Brick, New Jersey, where owner Tommy installed a blower cam, ported oil pump, C5-R timing chain and updated valvesprings. To handle all this new power, Tommy also rebuilt and upgraded the stock MN6 transmission.

From his frequent treks to the track over the years he met Chris Coriell and Doug Ring, co-owners of East Coast Supercharging in Cream Ridge, New Jersey. After taking a ride in an ECS prepared C5 and seeing what a supercharged ride could do, Cliff decided to sell his cherished wave runner for the needed funds to order up a blower kit for his Vette. He would not be disappointed.

Cliff bought the kit from ECS and installed it himself. He then had the guys at ECS test and final tune the car. The supercharger setup boosted his Corvette to life, and turned his race-ready Corvette into a street/strip beast. With the addition of a C5 Z06 titanium exhaust and an ECS installed Alky control dual nozzle methanol kit and more boost, the Corvette was now making just shy of 600 hp and 510 lb-ft of torque. Knowing he would have to install a ’cage in his newly blown ride to bring it to the track, Cliff made the call and decided to retire it from its track days.

Over the next few years, the Corvette morphed from its powered-up street car persona to a stately but motorvated show car. The first modifications were done to the outside of the C5. Cliff purchased several body mods for the car, including a set of L5 Motorsports rear flared fenders, an ACI custom rear bumper, MCM carbon-fiber hood and a Tiger Shark nose. He installed all the pieces himself and cleaned up the bodywork. He then had it sprayed in its original Arctic White by The Auto Body Shoppe in Caldwell, New Jersey.

Cliff took home plenty of awards from his local car shows, but he wanted more. He soon turned his sights to the “Mother of all Corvette Shows,” Corvettes at Carlisle, and started preparing to bring his prized C5 out for the judges to see. First, he did some underhood dress-up, having many of the parts powdercoated by Prodigy Coatings out of Fishkill, New York. Corbeau leather seats were installed to add some flavor to the interior. Once satisfied with his work, he was ready to roll into the big show.

In 2012, he entered the NCCC judged class and took home Third place on his first time out. That stoked the fire even more and pushed Cliff to keep adding to this already superb Corvette. He then detailed out the interior more aggressively, adding custom Italian Nappa leather touches from Apsis to the cockpit. Once he did all this work, he realized that the cheaper looking plastic parts had to go. He continued to cull and then upgrade many of the interior pieces, which also included adding a set of AutoMeter boost and fuel pressure gauges to the pillar. He then finally broke down and had Apsis do the entire interior in Nappa leather, accented with carbon-fiber components.

The following year saw a return to Carlisle where he pulled in a First place trophy. In 2014, he won Best Custom and Best Race Prepared in his class at the NCCC judged event, scoring a perfect 100 points. He continued on, making some small adjustments to the Corvette. In 2015, he switched his exhaust over to MagnaFlow and picked up a sponsorship. From there, Cliff’s Corvette did its duty over the next years, stationed in the MagnaFlow booth during the show.

Always reaching for more, Cliff then decided to take his 100-point show car to the extreme. He first installed a set of C6 Z06 brakes for a little more stopping power. To add to the overall look of his ride, Cliff installed a set of GM/Factory Reproductions C6 Cup Replica wheels: 18x9.5 fronts and 19x12 rears. The wheels are finished in a custom two-tone matte black/matte gray done by Prodigy. The wheels are shod in Michelin Pilot Cup rubber: 275/35R18 and 345/30R19, front and rear respectively.

Cliff also added some upgrades to the chassis of this wild custom Vette. To start, he installed aFe Control Pfadt Featherlight adjustable coilover shocks at the corners. A set of C6 ZR1 sway bars give a punch of performance to this FRC. Last but not least, a Zip Corvette front and rear bumpsteer kit helps out with alignment issues with less than perfect road conditions.

Then he took a giant step, bringing the C5 to County Corvette in West Chester, Pennsylvania, for a massive exterior makeover. They installed L5 flared front fenders, C5-R front lip spoiler, C6 ZR1 side skirts and a Carvaggio Corvette rear spoiler. After it was all blended in, once again a new coat of Arctic White was sprayed on its flanks. The results are nothing less than astounding. “I think I built the perfect C5 Corvette … inside and out,” states Cliff.

Here’s another interesting note to pass on. After Cliff bought his 1999, a friend told him that he knew the car’s first owner, a guy named Buddy. Cliff didn’t think much of it until 10 years later when he ran into his friend again. He said to Cliff, “What does it feel like to have a car once owned by a celebrity?” Cliff didn’t know what he was talking about. Turns out that “Buddy” is none other than Buddy Valastro of the TV show Cake Boss. It all made sense, since Cliff once found a receipt in the car with his name on it.

With its subtle, yet aggressive good looks and meticulous attention to detail, we can’t help but agree that this is one perfect C5. Future plans for this beautiful beast include hitting the road for more big shows and titles. He frequently makes the rounds at northeast shows, bringing along his wife and two sons, and her own stunning Regal Turbo T. For now, Cliff is more than happy with his stone-cold killer Corvette. But who knows what the future will bring? Vette

Joel Feingold pushes his 1998 Chevrolet C5 Corvette above 200 mph! Check out the video from Mojave Mile where he makes several standing start runs.

Part 1: We prepare to breathe new life into a 1999 Corvette hardtop, with a little help from L5 Motorsports, Forgeline, and Nitto. Click here for more details or check out the September 2012 issue of Vette Magazine.