It took nearly five decades, but David Miller finally has the Chevelle of his dreams 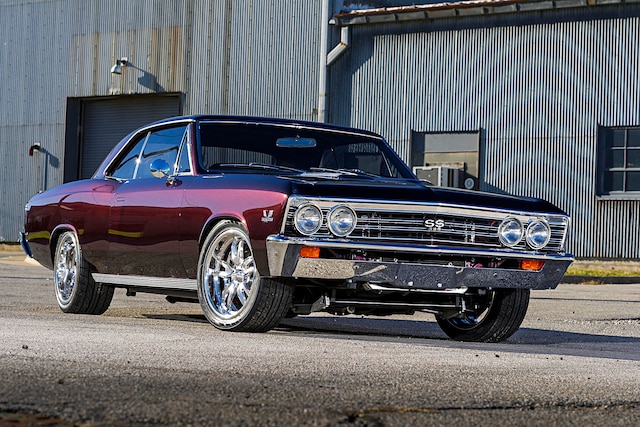 In the early ’70s, to be the lucky kid in town who drove a muscle car to school was a privilege, not a right, and David Miller almost didn’t have it. “My mom and dad argued about whether they should get me one or not. I was 17 years old and a senior in high school in 1972, and they were worried about getting me a high-performance vehicle for a driver,” he says.

Ultimately, Mom convinced Dad that he’d be OK, and Chevelle number one showed up in his life. The ’67 Chevelle SS had been pulled from a junkyard by a local enthusiast and restored to pristine condition. “I popped the hood the first Saturday I had it and was tinkering with it,” he recalls. “My grandfather, who was a mechanic, came over and he said, ‘Your secondaries on the Quadrajet are not opening up and you are just running on the primaries.’ We played with it for a bit and freed up the secondaries and I took it out for a test drive. I turned the corner off of my street, jumped on it, and turned it sideways and I said to myself, ‘Oh my gosh, this thing is a monster.’”

Miller owned it for approximately two-and-a-half weeks before wrecking it, as 17-year-olds are prone to do when handed powerful cars. Without getting too deep into the story, he got onto it going around a curve and a drunk driver was coming from the other direction and turned in front of him. After hitting a second car behind the first and going into a ditch, that was the end of his first Chevelle.

“It was devastating to me, too. It was such a beautiful car. I bought it back from the insurance company, took all the good stuff off of it, bought another ’67 Chevelle SS, and transferred everything to the new car, which was Madeira Maroon,” he says. That car remained in his possession for several years until he signed up to join the Navy and shipped out in January 1974. He tossed the keys to his little brother, said “have fun for a while,” and went off to ride the waves of life. A year later, little brother also shipped out for Navy duty and David asked his mom to sell the car off. There’s no telling where it is today.

The sands of time continued through the hourglass, as life’s journey brought a wife and a family, along with a budget that was stressed enough at the time supporting his loved ones that there was no disposable cash left over for car-guy activities. Once the kids were up and out of the house, his fleet business was in a successful position, and there was a place to store a vehicle like this, he jumped full-bore back into the opportunity to own another muscle car.

Three more ’67 Chevelles entered his orbit. The first was a Marina Blue hardtop example (which has since left his possession); then an SS convertible that has been restored to original, assembly-line condition; and, finally, this car, which was originally a vinyl-topped car out of Chicago with the ZZ502 crate engine in it.

Once David got the car home and discovered it needed some work, he had a decision to make. Should he just patch it together and make a fun driver out of it or go all out and treat himself to the car he’s always wanted?

“I decided to take it down and do it right. The big thing was having the discretionary cash and having a place to store it. I’ve got a 7,500 sq-ft outbuilding, and when I built it, I designed it with six garage doors along the side to put the cars in it,” he says.

Along with the fleet business, he also has a 100-acre farm, 100 acres of woodlands, and another 70 acres of pasture. The maintenance of this massive property requires several tractors and other pieces of farm equipment. And with 100 acres of soybeans (or corn, depending on the year) to maintain, along with the healthy business—and 11 grandchildren—you might imagine his free time is quite limited.

After taking the ZZ502-powered Chevelle apart and blasting the body to see what he was working with, he eventually realized that he just didn’t have the time to finish off the project. Although he had previous experience with swapping engines and rebuilding manual transmissions, he understood a full-on restomod was outside his realm of expertise.

“I’d never taken anything like this on before. It was my intention to do the whole thing. We tore it all down, I got a rotisserie to mount the body, and ordered the rolling chassis from Schwartz Performance in Illinois. It kinda sat for a while because I was so busy with work and everything, but one day I realized I wasn’t ever going to get this done. I just wasn’t making any headway,” he explains.

That’s when he started looking for a shop to work with. After an extensive search, Mike McLin and the team at The RestoMod Store took over the project, and did a bang-up job executing David’s vision.

He had simple guidance, “I wanted it to be a really cool one-of-a-kind vehicle, but I didn’t want to make it so different that you couldn’t tell it was a ’67 Chevelle SS.”

Although he reused the low-mile ZZ502 engine and a couple of the other pieces, which were on the car when he acquired it, everything else—including the G-Machine chassis from Schwartz—is brand-new and represents an excellent upgrade from the running gear a ’67 Chevelle would have worn on its original delivery date.

Behind the big-block engine, the powertrain consists of a TREMEC TKO five-speed manual transmission, a custom driveshaft from Inland Truck Parts, and a Schwartz Performance-assembled Moser 9-inch rearend housing filled with a limited-slip differential and 4.11 gearset.

The A-body G-Machine chassis from Schwartz Performance takes the classic lines of the Chevelle (which, in this humble author’s opinion, are some of the cleanest of the muscle car era) and gives them a stout-performing package underneath. In cooperation with the 18-inch Boze Alloys Intake wheels and grippy tires, the Chevelle now handles and performs like a modern muscle car.

The G-Machine setup—200-percent stiffer than the OE frame—is ideal for correcting the Flexi Flyer-esque ride quality and performance of the original ’60’s-era chassis. It combines drop spindles with improved geometry, RideTech adjustable coilover shocks, and tubular A-arms to provide exceptional on-road and on-track performance. In the rear, RideTech’s airbag suspension matches with a set of the company’s shocks and the Schwartz Performance four-link arrangement to provide excellent chassis control. Wilwood brakes are at all four corners and are a huge step up from the factory 11-inch front disc/rear drum configuration that was on the car in 1967.

Once the performance aspect was sorted out, two parts of the build in particular were extremely important to David: the colors used on the car’s flanks and those used in the interior.

With his guidance, The RestoMod Store replaced the factory gauges with a Dakota Digital VHX Series panel, then built a custom console and outfitted it with a full Kenwood audio system. They also covered the interior surfaces in a mixture of sepia and peat-toned Ultraleather. A dark briar brown cut-pile carpet finishes it off.

David went back and forth with the RestoMod guys trying to pick out the perfect shade of paint. It took about six weeks of going back and forth with custom colors and sample panels sprayed before he finally made his choice. David calls this custom exterior color Aubergine, the British word for eggplant.

“I wanted it so that no matter what light you looked at it or what direction you looked at it, you couldn’t tell what color it was if you were standing back. It looks black, or purple, but then when you get up to it you can really see the color. I wanted it to look different colors from different directions,” he says.

We think they nailed it—and everyone who sees the car agrees.

Joe Lovat Jr. Saves One Chevy Every Year. This Year, it was a SS 396 Chevelle!