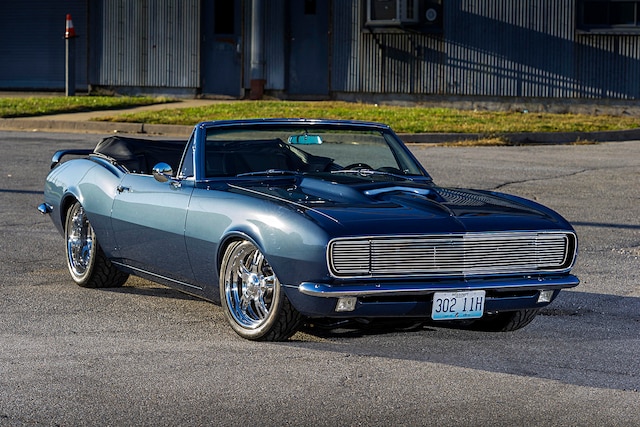 Lately, Super Chevy has featured a number of cars that have been resurrected from chassis located on Craigslist. Wendy and Brian Hiestand’s ’67 Camaro convertible also falls into that category. Despite its reputation as a place that’s difficult to find a good deal, you can find what you’re looking for if you’re patient, know what you’re looking for, and are willing to travel for the right car.

In the case of this machine, the Hiestands knew exactly what they were after when they started looking for a car to restore. The veteran car show aficionados wanted to do something different than just restore a Camaro back to stock. From the looks of it, they accomplished their goals with an eye-catching example of the breed.

But it didn’t happen easily. The chassis they found on Craigslist was in Iowa, somewhere around 300 miles from their Kansas City residence. So they loaded up an empty trailer, hit the road, and brought back the new project. “We’d been looking around and the convertibles are a little bit harder to find than the hardtop,” says Brian. “Here in the Midwest it’s tough to find them. We’ve been going to car shows forever and we’ve always liked the old cars. We wanted something that Wendy could just get in and drive and not have to worry about any problems with it overheating or not starting or any of that stuff that goes with old cars.”

Although the history of the car was unknown, they knew it had a workable, non-rusted base from which to begin their project. See, in the upper Midwest it’s difficult to find a chassis that isn’t pocked with rust. Even though they had a plan to cut the car up and make it their own, the process is made simpler when starting with a chassis that doesn’t need to have every panel replaced.

After bringing the car home, the pair disassembled it to prepare it for the arduous, four-year rebuild. Interestingly enough, the length of time it took to perfect the car was wholly self-inflicted. Brian has had several hot rods of his own, but since this car was chosen from the outset to be for Wendy—her first-ever hot rod—she had several criteria to hit with the project. After that, it was up to Brian to determine which parts and pieces would be used.

“I told him what I liked and what I wanted, and then he added some things from there. I gave him a list of things it had to have. I liked the pushbutton start, I wanted air ride, and I liked the modern interior, and the color. I kind of like grey, but blue is my favorite color, and I wanted something that not everyone else had,” says Wendy.

With that said, the decision was made to cover the Camaro’s flanks in eye-catching GM Supersonic Blue, a pigment found on 2011-’13 Corvettes. The modern interior is one of the most impressive parts of the entire car. Dan Tallant of Tallant’s Hot Rod Shop in Kansas City, Missouri, handled its construction. “We knew we wanted the modern Camaro dash, but after that we left it up to him to come up with his own plan. The bezel is from a 2012 Camaro, and it was made all around that. The structure behind it is steel but the skin is fiberglass,” says Brian.

After the car was disassembled, Brian had it mediablasted then installed the Detroit Speed mini-tubs and finished the car underneath with Hotchkis frame connectors and crossbrace to prepare it for the future. Many of the parts—including the engine, transmission, rearend, wheels, tires, and brakes—were all ordered, and it was delivered to Tallant’s as a roller where body and prep work began in earnest. As you might imagine, the list of modifications to this pretty car is long and detailed.

Externally, the modifications are limited to the steel Yenko Stinger hood that was procured from Tamraz’s Parts and the billet grille that sets the car’s frontal appearance apart from other ’67 Camaros.

Power delivery comes from the Mast Motorsports 416-cubic-inch LS3 engine, which is filled with a Callies crankshaft, Mahle 11.2:1-compression forged pistons, and a custom Mast Motorsports hydraulic roller camshaft. Up top, a set of aluminum LS3 cylinder heads, LS3 intake manifold, and 90mm drive-by-wire throttle body complete the package, which is estimated to produce 580 horsepower and 535 lb-ft of torque. Stainless steel Kooks long-tube headers exit the spent gases into a Tallant’s custom 3-inch exhaust, which incorporates a set of MagnaFlow mufflers for the perfect exhaust note.

The engine is backed up by a Phoenix Performance Transmissions 4L70E four-speed, and utilizes a 3,000-stall torque converter to best maximize the engine’s powerband. It feeds into a Ford 9-inch rear axle filled with a 3.73:1 ring-and-pinion to motivate forward motion when the throttle is mashed.

“This is the most powerful car I’ve driven,” says Wendy. “I love the power of it, but sometimes I don’t want it to be loud. Brian wanted to go louder but I like it the way it is.” Other notable pieces include the aforementioned air-ride system, which was set in place using a complete kit from RideTech, including 2-inch-drop RideTech spindles and the company’s bolt-in four-link kit that settles the rear five inches lower than stock ride height.

Once all of the work was finished at Tallant’s, it was off to upholsterer Don Kite, who covered the interior in black leather, complete with striking white-stitch accents. Wendy’s stipulation of a modern interior gave him a target to shoot for and he delivered exactly what the Hiestands desired. The black leather was chosen, then Kite dropped a new ACC cut-pile carpet into place, designed a set of custom seat patterns into the material, and finally built custom door panels. A Billet Specialties Camber steering wheel was the last piece to finish the interior off perfectly. Kite also installed the Sony sound system, and a brand-new top was installed to complete the car’s appearance. Other creature comforts include a Vintage Air HVAC system and custom-built seats. “Trying to decide what to do at the different stages was the hard part,” says Wendy. Although the car took four years to build from start to finish, the end result is well worth the wait. Don’t you agree?