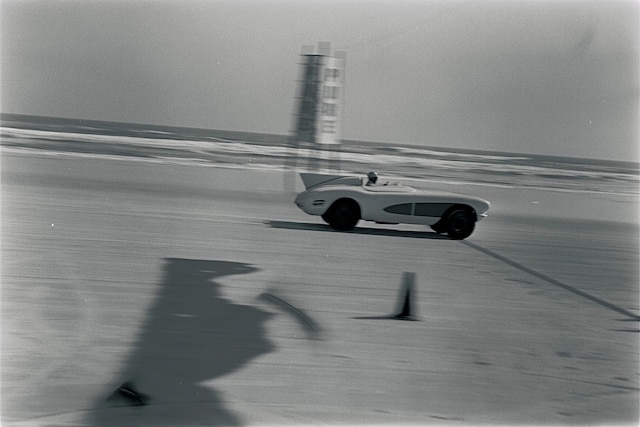 Zora Arkus-Duntov went to Daytona Beach in February 1956 with something to prove. That something was speed.

Six months before, he had pushed a camouflaged 1956 Chevy sedan, powered by Chevrolet’s new 265-inch V-8, to a Pikes Peak record. In discussions with Chevy GM Ed Cole after the Peak run, Duntov said he believed a V-8–powered Corvette could reach 150 mph. Cole believed him, or believed enough in him, and approved a three-Corvette team for the Daytona Speedweeks. Duntov would drive a test mule that wore a combination of 1956 body parts and aerodynamic aids that included a tailfin mounted to the rear deck behind the driver’s seat, a tonneau cover over the rest of the cockpit, and cone-shaped covers over the headlamps. The two other cars, driven by John Fitch and Betty Skelton, were for the most part stock 1956 models, though all three were powered by small-blocks with the now-famous Duntov cam turning in the block.

To ensure Chevrolet’s presence was felt at the event, the official pace car that year was a 1956 Corvette. To spread the wealth even more, NASCAR chief Bill France Sr. was given the chance to run the beach course in one of the Corvettes.

Speedweeks got off to a slow start that year due to the sand’s terrible condition. The weather was clear and sunny, wrote Ray Brock in the May 1956 issue of Hot Rod magazine, but what the rough course needed was a strong northeast wind to push waves far enough up the beach to smooth its surface. Because the weather didn’t cooperate, what should have been nearly two weeks’ worth of testing and acceleration contests prior to the NASCAR Stock Car races on the beach-road course boiled down to just a few days.

A full week after the event was supposed to start, cars finally began competing in the standing mile. Chuck Daigh, driving a Thunderbird that had been “cleaned up” with aero modifications similar to Duntov’s Vette, claimed the top speed at 92.142 mph. Duntov was second at 89.910 mph. Both cars were disqualified, though, after a post-race teardown found their engine blocks had been overbored, an infraction of NASCAR’s stock-class rules. Undaunted, Duntov moved his Corvette to the Modified Sports Car class.

In the last days before the Grand National race, Duntov’s team finally showed what the Corvette was capable of. Fitch, who Brock said “had a good idea for traction until officials made him remove the engine block from his Corvette’s trunk,” prevailed anyway and won the Sports Car division with an average speed of 145.543 mph. Skelton came in Second (and won the Woman’s Sports Car division) with a 137.773-mph average. That gave her the “fastest time ever run by a woman on the beach,” said Tom McCahill, writing in Mechanix Illustrated.

And Duntov? A photo caption in Hot Rod said he “bettered 150-mph one-way” in his aerodynamic Corvette, though he officially won the Modified Sports Car division with an average speed of 147.300 mph. But the team’s efforts were good enough, and the Corvette’s racing potential deemed strong enough, that Duntov was tasked with the building of the first, but definitely not the last, batch of Sebring race cars. Vette

Zora Arkus-Duntov at speed at Daytona Beach in 1956. The car was one of his test mules retrofitted with 1956 bodywork and several aerodynamic aids.

Once the course finally smoothed out, NASCAR’s “Big Bill” France tried his hand on the sand in one of the Vettes.

Duntov starts one of his flying-mile runs. Ray Brock wrote that the Daytona Beach sand is “very fine in texture” and “packs very firmly, though not concrete hard like Bonneville’s salt.”

Chevrolet placed this ad on the inside cover of Hot Rod May, 1956 issue, which contained Brock’s Daytona coverage. “There’s a new 225-h.p. high compression (9.25:1) job with dual 4-jet carbs that has already shot Corvette to new records for American sports cars at Daytona,” it read. “Coupled with Corvette’s new close-ratio ‘stick’ shift it will produce acceleration in first gear alone that will top the best efforts of many justly famous markssic.”

A Corvette barn find is an increasingly rare event these days when just one car is unearthed. Here are two from the same barn!

This 1956 Corvette was a modified race ride when Ray Bruno bought it when he was 18. Now completely restored, they’ve been a combo for over 40 years.

A 1956 Chevrolet Corvette that was matched with a LS7 V-8 is a great father son duo. Check out the modified interior.

The rarest of all St. Louis-built year models when there weren’t a lot of Corvettes made in 1956. Now in Blade Silver, this 1956 Corvette came in red.

Check out this archive column on a transmission swap on a 1956 Chevrolet Corvette. See how this swap makes all the difference!

Check out this from the archives column as they test drive a 1956 Chevrolet Corvette SR-2 built for Harlow Curtice, GM President.