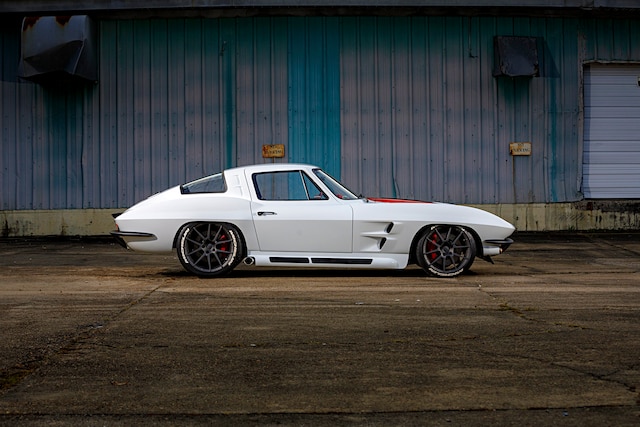 From all indications, this 1964 Corvette coupe was intended to spend its life as a racehorse right out of the gate. As one of 5,274 1964 Corvettes produced in Riverside Red, it was equipped with a 375-horse fuel-injected 327, deep gears with posi and radio delete. Already a C5 Corvette owner and hot rodder, owner Steve Locklin explained to Vette it was the C2 Corvette’s timeless styling with the ridged spine down the top that helped him decide a Sting Ray would be his next project. Steve found the ’64 on eBay and learned from the seller that Tim Ames at J&M Enterprizes in Brooksville, Florida, was familiar with the car and could attest to its condition.

After consulting with J&M, Steve bought the ’64 sight unseen and commissioned J&M to get the ball rolling while he waited for his appointed date at Mike Goldman Customs in Meridian, Mississippi, to arrive. Steve’s plan for the ’64 was to end up with a car he could show and go. The stock ’64 frame J&M had replaced for the last owner was nixed and a C7 Z06-based rolling chassis was ordered from Street Shop in Athens, Alabama. Steve expressed he’d like an extra-slammed stance so the front and rear suspensions were raised one inch to accommodate special ordered mandrel bent 4x2-inch framerails, dropping the C2’s center of gravity closer to the ground.

Pointed with a Flaming River tilt column and Detroit Speed rack-and-pinion steering, the front suspension and brakes are C7. The rear suspension is C7 with a HammerHead billet IRS differential with positraction. Powdercoated in graphite color, the one-off design Forgeline wheels are mounted with 255/35R18 in front and 345/30R19 in rear Michelin Pilot Super Sport tires. Goldman’s applied white letters to accent the Michelin tires.

The coupe body was modified to accept wider wheels on the Street Shop C7 chassis by J&M Enterprizes using J&M’s complete rear floor section and 1 1/2-inch widened flared quarter-panels from their product line. J&M customized the hood, extending it to the cowl with the hood finished off by Talbert Goldman grafting a 2016 Camaro hoodscoop into the stinger. Goldman Customs completed the remainder of the fiberglass work. The hideaway headlight doors were converted from vacuum to electric using a Detroit Speed kit, and a Detroit Speed windshield wiper system was installed. Meeting Steve’s desire for the ’64 to have an easily maintained show and go paintjob, Goldman Customs’ Don Brackin laid down Arctic White in Axalta Cromax and then accented the stinger in Victory Red. Dual red LED taillights replace a single red taillight and clear backup light lens.

In an Axalta Chromax base, Graphite is the color used extensively for detailing, including the thinned and tucked bumpers by Talbert Goldman all topped with a matte finish clearcoat. The door handles are by Clayton Machine with latches mirror polished by Dan’s Polishing Shop.

Steve Locklin’s ’64 Corvette has made a variety of appearances since its 1 1/2-year build at J&M Enterprizes and Goldman’s Customs. Toward the nearing of completion Locklin requested the progress photos to cease because he wanted the ’64’s final look to be a surprise. And a complete surprise it was, Talbert Goldman warned Steve before the ’64 was unveiled at the Goodguys Columbus show that he had added a little “hot sauce” to the mix.

The hot sauce Talbert added wasn’t in Brockmeyer’s rendering, and it was never discussed during the build, but there it was, a spoiler on the tail of the Sting Ray. Locklin told Vette when the cover was pulled off the car it exceeded all expectations. Since its debut in Columbus, the ’64 was exhibited at the SEMA show in C&R Racing’s booth and Steve recounted his most memorable experience to date as autocrossing the ’64 Sting Ray at Texas Motor Speedway. Vette

After 40-Plus Years, 1964 Chevrolet Corvette Sees the Light of Day