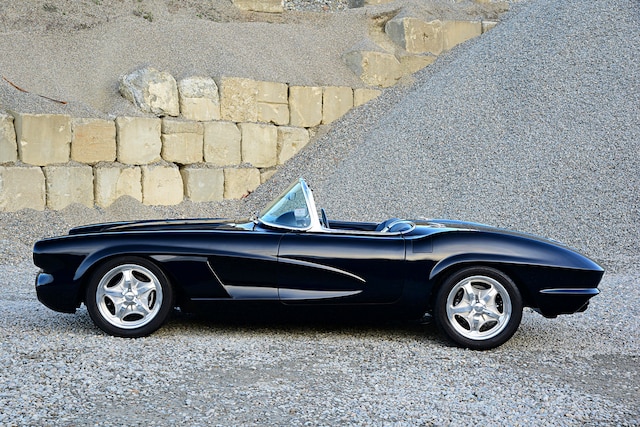 When looking at the early performance years of the Corvette, it’s easy to see that there were plenty of success stories. Regardless if they were crowned on the street, dragstrip or road course, the capabilities of the C1 were undisputed, gaining worldwide recognition for being able to take on the European marques. Straight off the dealership floors the C1 was a well-respected and often feared contender in competition. Once modified to suit its needs it became a true weapon. Oftentimes, many of the revisions, whether mechanical or cosmetic, found their way onto the street to emulate the car’s racing history by eager owners.

Restyling Corvettes became more and more apparent as the years passed, especially when moving into the ’60s and ’70s. While there were many well-balanced subtle changes made by car builders, there were often changes that needed to be forgotten, including radical hoodscoops, extra-wide fender flares and square headlights. When properly executed, however, mild visual changes can bring a fresh, almost exotic feel to the car. For David Tocci of Needham, Massachusetts, having owned over 20 Corvettes over the past few decades gave him plenty of hands-on time with a special group of models ranging from C1s all the way through C6s.

Looking back to the formative years, David spent plenty of time with his brother Al, an avid racer both on the track and street. Add in the fact that his dad was a dirt track Sprint Car promoter who regularly had the family with him at the races combined with yearly trips to the Indy 500. Through the ’50s and the ’60s their influence skyrocketed, especially when Al was competing with his 1959 Corvette. The car embodied everything to David with its race-bred performance and seductive styling. From that point on there was no doubt that Corvettes would become a very integral part of his life. While many of them were restored originals, there were a special few that had undergone the knife, giving them remarkable personality changes.

A number of years ago he saw the limited edition 1953 Commemorative Edition C5 Corvette, melding the modern underpinnings of a C5 with the classic lines of the C1. The cars, being produced by Advanced Automotive Technologies (AAT) in Rochester Hills, Michigan, were truly unique. This led him to ship his personal C5 there to undertake the conversion. The delivered car generated plenty of excitement when it hit the road and major events. David then decided to take out a fresh sheet of paper and sit down personally with Steve Pasteiner of Advanced Automotive Technologies to design the Corvette of his dreams. Having always felt that 1962 was an iconic year it was an easy decision to focus all of the attention on what it would take to bring one to the next level. With Steve’s personal background including a degree from Art Center College of Design as well as 22 years with the General Motors Design Staff and running AAT since 1988, his design capabilities encompassed every facet needed to bring a vision to life. While creating the renditions for the project, Steve wanted to infuse a number of styling elements to pay homage to the 1962s, which competed at the 12 Hours of Sebring as well as adding new-generation handling and performance. Combining the elements would effectively create a perfect balance with a twist. Once a decision was made on the new build, David started the search for a suitable donor car. His quest led him to New Hampshire where he located a respectable roller project that was minus its driveline. The car was in good overall shape with a solid frame and clean original body. A deal was made and before long it was shipped to Michigan to get started.

Once received, the team at AAT got busy by first tearing the car down to bare bones. From there the original frame was blasted clean and boxed for additional strength. Wanting to give the car a pavement-grazing stance and well as increased handling capabilities, suspension updates followed by first updating the original frame to accept C4 components. Out back, a refreshed C4 IRS was installed complete with polished trailing arms and halfshafts accented by Bilstein high-performance gas shocks and new transverse spring. Up front, a C4 IFS was incorporated complete with polished upper and lower control arms, Bilstein high-performance gas shocks and new transverse spring. For plenty of stopping power when its time to drop anchor, fluid moves through a dual power master to stainless lines coupled to 12-inch factory vented discs with matching calipers mounted at each corner. Wanting a traditional hot rod feel, a set of 17x8 Schott Velocity wheels with custom-fabbed knock-offs add just the right attitude. For maximum grip they’re capped with BFGoodrich G-Force Sport Comp-2 rubber.

If you’re going to up the ante there’s no better way to do it than contacting Chevrolet Performance for one of their fire-breathing crate engines. David selected their 376ci LS3 packing a rock-solid 430 hp right out of the box. The engine comes packed with go-fast goods starting with a cast-aluminum block with six-bolt, cross-bolted main caps filled with a nodular iron crank linked to powdered metal rods wearing hypereutectic pistons getting bumped from a hydraulic roller cam. Up top there’s plenty of seamless power from a set of L92-style rectangular port aluminum heads combined with the factory EFI intake system and 90mm ETC throttle body and special tune from Speartech. Custom updates included a 4-inch polished aluminum cold-air induction routed into the front valance panel as well as a custom-fabbed engine cover and coolant reservoir, all by AAT. A factory ignition lights the fire while spent gasses dump through custom stainless headers to a matching 3-inch exhaust with Borla mufflers. To move the goods a TREMEC TKO-500 meets a custom driveshaft.

When it came time to adding a number of updates to the body, Steve reached back into history to when the 1962s ran at Sebring and wanted to infuse a stripped-down competitive look. He first ditched the front bumper and updated the nose to incorporate a triple front opening with recessed custom grille face complete with styled stainless accents, molded headlights and custom tunneled turn signals. From there the body was shaved of all accents and trim. Custom front fender flares were then added to properly accent the rear flares while to door handles and locks were eliminated for a clean look. Out back, the bumper was eliminated while also updating the look with triple taillights and a custom lower valance with oval exhaust outlets. With all of the custom work completed the body was made razor sharp and gapped to perfection. David selected a custom-blended PPG Night Watch Blue pearl vibe to bring it all to life by the team at AAT.

For an interior that would be a true standout, the team added plenty of one-off updates, including an updated dash filled with gauges from Dakota Digital to monitor the vitals. A hand-machined steering wheel carves a course with gears pulled through a custom billet stick with other fine details including a handmade console and door panels. Particular attention was paid to the factory seats, reshaping them for added comfort while also perfectly fitting them to the curvature of the back deck. For this, Steve enlisted the talents of Dagmar Salis of Protovision who also covered them in soft sapphire blue leather with suede accents. Dagmar continued on by wrapping the dash and side panels to match, completing it up with accenting Mercedes blue plush wool carpet. Final tuning and detailing came from Nick Capobianco at Accurate Automotive & Performance in Hyde Park, Massachusetts. This is one truly unique C1 that sees plenty of miles with David behind the wheel and to us that is just plain cool. Vette