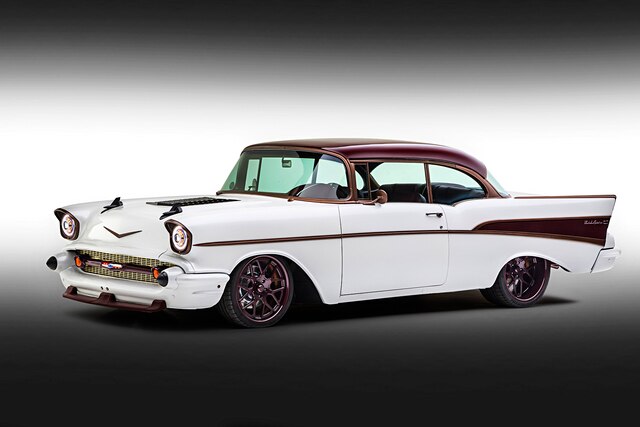 I’ve been writing automotive features for a variety of print and online publications for the better part of the last two decades. I thought I’d heard it all ... until I talked with Larry Ashley of TMI Products about this spotless, eye-catching Tri-Five, which appeared in TMI’s 2017 SEMA booth as part of the company’s strategy to display some of its newest products. Of course, our crack Super Chevy team spotted the car standing tall on display and immediately planned this feature shoot, and now that we’re able to hear the details behind the car’s acquisition, the underlying story is even more unbelievable than the car’s beauty.

Ashley is one of those motoring enthusiasts who is always looking for something new. It takes a serious machine to keep his interest for more than a couple of years. But the fact that this ’57 materialized from the ashes of a Honda XL600R enduro bike is, quite simply, astonishing.

“I had purchased an old, 1987 Honda XL600 enduro bike to trail ride with my buddies a few years back. I paid $700 for it and rode it for three seasons,” he says. After three years of playing with the enduro machine he decided it was time for a new toy. Enter a friend who had received a 1969 Mercury Cougar, which had been received in trade for work performed on another person’s car.

“I saw it and knew I had to have it. The only problem I had was that I didn’t have any money. So I simply asked him if he would do a straight trade for my dirt bike. The next thing you know I am running home, grabbing the bike, and throwing it in the trailer and now I am the new owner of a ’69 Cougar,” Ashley recounts.

I’m pretty sure you can see where this is going by now. But the story doesn’t end there; not by a long shot, in fact. Ashley had previously built a Pro Tourer from a 1968 Mustang. After a short period of time he realized that the newly acquired Cougar was quickly turning into the same project. Then he went to SEMA in 2014 and came across a bagged and fully done ’74 F-100 pickup truck and immediately knew what the next project would be.

“I knew that was my destiny. I came back from SEMA and went straight to Craigslist and started looking at F-100s. I sent an email to a guy who was selling a ’70 F-100 asked if he was interested in trading for my Cougar. Well, the next day I was the proud new owner of an F-100,” says Ashley.

The truck became a TMI Products build for the 2015 SEMA Show and not long after a friend asked him when he was going to tackle a Tri Five build. Ashley, whose only real familiarity with Tri-Fives was way back in high school when a well-to-do friend received one for his 16th birthday, started dreaming and scheming.

“I came across a listing for a ’57 coupe and in the ad the guy had listed the possible cars he would trade for. Guess what? An F-100 was listed so I sent the guy a text with a pic of my SEMA F-100 and asked if he would be interested. He asked if it was the truck that was currently in Classic Trucks magazine, and I replied, yes. The next thing I know, he trailers this Bel Air up from San Diego, we look at pink slips, verify VINs, and 30 minutes later I’m the new owner of a ’57 Bel Air,” he says.

The ’57 was subsequently turned into one of TMI’s 2017 SEMA display vehicles designed to show off the company’s Tri-Five product line. Covered in a mixture of a Lexus Eminent Pearl White and Ford Royal Maroon with bronze trim, the car certainly stands out from the crowd.

Under the hood is one of BluePrint Engines’ 383 stroker engines, which utilizes BluePrint aluminum heads, a forged crankshaft, forged steel I-beam connecting rods, and forged pistons. The four-bolt-main block is handpicked, squared, and parallel decked before having the main bearing bore align-honed and the cylinders bored 0.040-inch oversize and honed to within 0.0002-inch straight and round dimensions. BluePrint also sonic tests the cylinders to ensure thickness.

BluePrint’s hydraulic roller camshaft spec’d in this engine—measuring 0.536-inch lift on the intake and 0.555-inch exhaust lift, with 224/236-degrees duration at 0.050-inch and a 113-degree lobe separation angle—works nicely when combined with the engine’s 8.9:1 compression to make this engine power-adder ready, which is ideal since the ’57 features a ProCharger P-1SC centrifugal supercharger under hood. A combo that made nearly 700 hp on the dyno.

Doug’s headers carry the exhaust through a set of Flowmaster single-chamber mufflers to provide the iconic supercharged small-block sound to anyone within earshot. Rather than rely on a carburetor, one of FiTech’s direct port fuel-injection systems was selected to give clean, crisp startup and under-power performance. Power flows through a Modern Driveline-modded TREMEC TKO-600 six-speed manual transmission. Larry’s not afraid to drive this bad boy and kick the man-pedal when required. The 9-inch rearend housing from Currie is filled with a 3.55:1 ring-and-pinion.

Prior to any of the suspension components finding their way onto the car, Seven S Powder Coating in Riverside, California, tuned up the frame with a fresh appearance, which also helps with corrosion resistance. The body sits on Prothane urethane body mounts. RideTech suspension pieces abound underneath, from the StrongArms upper and lower control arms in the front to a four-link system in the rear. RideTech coilovers ensure that all four tires stay planted.

Other critical components include the front and rear brake systems from Classic Performance Products; a fuel tank from Tanks Inc.; a Champion Cooling radiator; and an oil pan, A/C motor, and water pump from CFR Performance. A Painless wiring harness and Odyssey battery handle the electrical needs, a Davis Unified Ignition HEI system supplies spark to the cylinders, and an Old Air Products HVAC system keeps the occupants cool in the SoCal summer heat.

Dakota Digital gauges and clock provide driver feedback, HID projector headlights ensure Larry can see what’s ahead of him on the road, and AMSOIL fluids keep all of the mechanical components lubed and happy. Miscellaneous parts and accessories are from All American Billet and Danchuk, and all of the weather trim has been replaced with pieces from Repops to ensure sealing.

Lots of great parts are installed throughout this car, as befits a true SEMA build designed to show off a company’s capabilities when it comes to developing parts and pieces to capture the attention of the automotive enthusiast. Ultimately, though, the most fascinating part about Larry Ashley’s ’57 Coupe is how it came to be in his possession.

“I still can’t believe I pulled this off. My wife can’t believe it either. In just a few short years and a lot of going through Craigslist, it is amazing what people will trade for. I could never afford a car like this.”