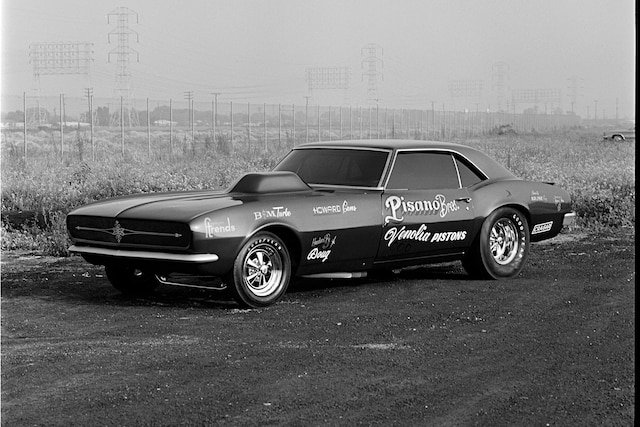 Don’t bother looking for a battery pack or electric motor in this Funny; that’s not why we called it a hybrid. Instead, note how Joe and Frankie Pisano combined a steel Camaro body with fiberglass at both ends to create what Car Craft magazine called “an entry in the wild 2400-pound class that was an immediate winner.”

“Before the Camaro was painted it was real easy to pick out what was fiberglass and what was steel,” said the magazine. “Fiberglass Trends did the nose and rear deck, while Fisher Body can take credit for the steel work.” The Camaro’s long schnozz “has shown no tendency to ‘lift,’” said CC.

The ducktail spoiler on the decklid “helps hold the car on a straight, steady course on the big-bore runs,” the mag said. The receptacle seen in the center of the rear bumper was there to hold a Simpson drag chute.

The Don Long chassis had a dropped axle, coil springs and radius arms in front; Doug Kruse fashioned the rear suspension with a four-link and massive Monroe coilovers to damp the housing’s movements. “Goodyears and Cragars do the job” at the corners. CC’s Bob Swaim was on hand in January 1967 to shoot Kruse working on the aluminum interior panels and bucket seat, which Tony Nancy would later upholster.

The engine was a fuel-burning 427-inch Chevy topped with a 6-71 supercharger and backed by a B&M Turbo Hydro transmission. “Cragar blower drive and Howard cam are Pisano old-time engine favorites,” read CC’s Oct. 1967 feature. No need to mention the Venolia pistons in the block, given Joe’s association with the company—as president and partner with founder Bob Toros.

“When it came down to the chore of selecting a driver for the new car, veteran Bonneville ace Joe Pisano simply turned to younger brother Frankie and gave him the word,” said the article. “With Frankie at the wheel, the 2400-pound beauty is right up among the big challengers in the exciting ‘funny’ car ranks.” Elsewhere in the story, CC reported “initial runs on the Camaro were made at Long Beach Drag Strip and rewarded the crew with some strong 170 runs in the low eights.”

Car Craft’s editors liked the Pisano Brothers’ Camaro so much they named it among 1967’s “10 Best Rods” in the January 1968 issue. “From the beginning the car was an immediate success, moving to the top of the wild Southern California standings,” they wrote. “Joe Pisano has been in the thick of the hot rodding and drag racing scene right from the start, but this lean and mean, bright, bright red screamer has to rate at the top of the list of outstanding Pisano cars. Top of the eights and speeds approaching 180 mph are proof enough.”

Well, maybe. According to Bob McClurg’s informative Fire, Nitro, Rubber and Smoke from CarTech books, the Camaro “proved a tad too heavy for serious match-race Funny Car competition. It was replaced late in the year with Doug Thorley’s Indianapolis-winning S/XS Corvair,” a car that, coincidentally, also made Car Craft’s 10 Best list for 1967.