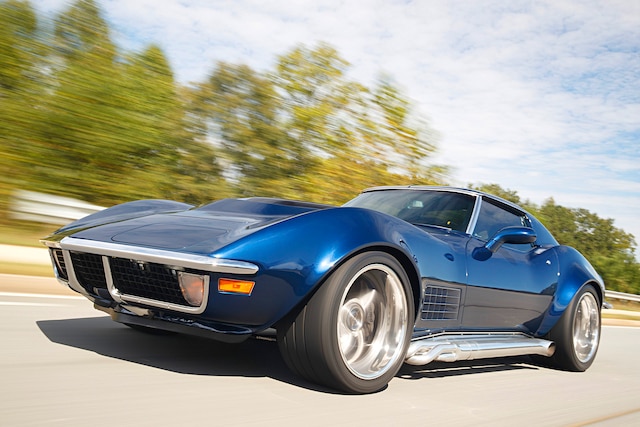 Eric Fleming is one of those lucky guys whose wife loves the car hobby as much as he does. Fleming has a rocket-fast 1970 Chevelle that he frequently drag races and shows, and his wife, Lindsay, is often at his side. A few years ago they decided to buy a fun car for her to drive, and they didn’t have to look very far for a suitable candidate.

The Fleming’s good friend Jeffrey Harris, owner of Mo’s Speed Shop in Dallas, Georgia, bought a 1971 Corvette in 2000. It was a nice original coupe with a base 350/270-horsepower engine and TH400 automatic. In 2003, Harris sold it to his uncle Bill, who used it sparingly for a few years and then put it into storage before selling it to the Flemings in 2013.

After replacing a rusty fuel tank and rebuilding the brakes, the Corvette was back on the road. Over the ensuing year, the Flemings used the car while accumulating the needed parts and slowly but steadily replacing things as time allowed. Going into the second year of their ownership, Fleming began putting a plan together to do a comprehensive but mild overhaul, including new Vette Brakes & Products suspension and a crate LS3.

Working with a friend, Fleming completely disassembled the car and replaced every nut, bolt, and part forward of the firewall. When it was all buttoned up, including the new 525hp LS3, Fleming did his first track event with the car at Road Atlanta. He found the experience thrilling and the car performed very well overall, but the original automatic transmission didn’t hold up to the stress. After returning home, Fleming called Jeff Kauffman at Silver Sport Transmissions and ordered a TKO-600.

With a new, stronger transmission bolted up to the LS3, and the thrill of his first track day still fresh in his mind, Fleming made a trajectory-changing decision. He would requisition what was supposed to be his wife’s fun car and transform it into his own track rat. The car’s major limitation at that point was its still mostly stock chassis, so that’s where he started the conversion.

“Around this time,” Fleming remembers, “RideTech had completed a 48-hour build on a ’72 Corvette, for which they developed several new suspension components. A call to the helpful staff there had a slew of new parts on the way.” He began by replacing the original rear transverse monoleaf suspension with coilovers, which are better designed and tuned for road course use. He continued working with RideTech over the next two years, upgrading parts as they became available. Throughout 2016, the car was fun, fast, and semi-competitive at both autocross and road course events.

The following year, Fleming brought the car to RideTech, where it got numerous updates and enhancements, including Track 1 suspension components and Instinct electronic shocks. From there, it went to Custom Image Corvettes (CIC) in Watertown, South Dakota. “It was at CIC where the build-creep really set in,” he explains. “It started as a re-spray of the original color, then developed into adding CIC flares and changing the color, and ultimately evolved into a full-on rebuild.”

By the time it was finished, the car had a widened body, show-quality fit and finish, fresh paint, a new crate LT4 from Karl Performance Parts, a built T-56 Magnum from Silver Sport Transmissions, and a long list of additional modifications. “At the time, neither CIC owner Josh Powers nor I were aware of how taxing this project was going to be with nothing existing for an LT4 swap into a C3 Corvette. The front accessory drive had to be completely fabricated with custom brackets for the A/C, alternator, and power steering. Yes, this car has hydraulic power steering from Turn One, which was one of the biggest hurdles to overcome with the LT4 swap, as the new GM cars are using electronic power steering and thus have no power steering pump mounting provisions.

“One step at a time, the checklist grew shorter and shorter. An Improved Racing oil cooler and fan were mounted in the driver-side vent area, previously occupied by the original vacuum reservoir. We deleted all vacuum accessories in favor of electric-powered headlights and wiper door. An intercooler and pump were designed to fit the limited space in front of the radiator and A/C condenser, while still allowing the hood to open. Side pipes had to be custom fabricated because they did not exist for a C3 LT4 swap. Countless other parts had to be modified or fabricated.”

All of the time, effort, and ingenuity paid off with what, by any measure, is one of the coolest and fastest C3 Corvettes on the planet. Fleming loves where he’s ended up with the car and continues to do track days and street-drive it regularly.

Looking ahead, he’s going to upgrade the interior by wrapping the original trim pieces with high-quality leather, change the shock valving, and fine-tune the suspension to squeeze out ever-faster lap times. And, perhaps most important of all, he also plans to buy a fun car for his wife to replace the one that got away from her. CHP