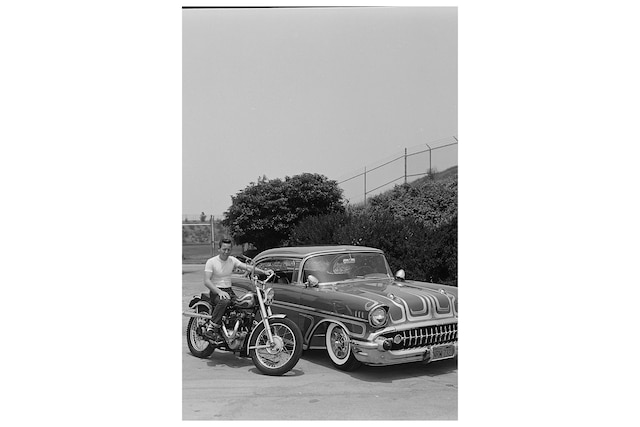 Dean Jeffries laid down the gold-tipped silver-blue scallops, which must have contrasted nicely on the Matador Red body. (If only Rickman had shot the car in color ...) The Triumph’s tank and fenders were painted to match.

Other than the paintjob, the car is a fairly mild custom. The “Chevrolet” badges and V-shaped emblems were removed from the hood and trunk lid, but otherwise much of the car’s original exterior trim remained. The center of the grille was cut out and replaced by a Corvette grille, and spotlights were added on both sides of the car.

The single-page story about Pierce’s car in the December 1958 issue of Hot Rod magazine did not include photos of the car’s engine or interior. Maybe the editors wanted to focus on Jeffries’ striping work rather than the relatively stock looking interior, which, as far as we can see, was modified only with a large die as a knob on the three-on-the-tree shift lever.

Likewise, the engine bay looked factory stock, though the story called it a “270 Corvette with dual quads.” This was the first year for the 283ci small-block; and since the 270hp version, with its solid lifters and Duntov cam, was offered in both Corvettes and the passenger cars, it’s hard to know at this distance if the engine was really swapped in from a Vette or just dressed like one.

Pierce was able to do a lot with his Chevy for not a lot of cash. “John achieved an outstanding custom and rod (it turns 95 at the drags),” the story read, “with an outlay of $800 over original cost of car.”