This 1968 El Camino Will Knock Your Socks Off

Edith Shrum’s dedication does not wane 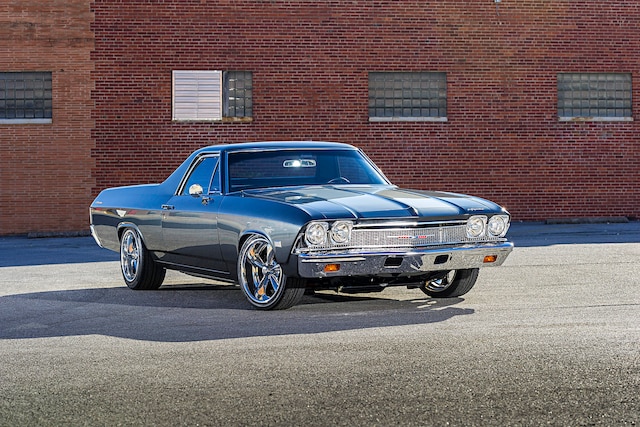 As we keep reminding ourselves, a car feature is ostensibly about the humans that nurture it more than the metal encasing it and the parts that drive it. Sure, we want to know what makes it tick and what makes its wheels turn, but the thing is to know how and why it got that way. When the caretakers are a married couple it often becomes their projection—a joining of two-are-better-than-one. Will they bicker? Certainly they will bicker. That’s what husbands and wives do. But their inevitable accord is what cements their distinct halves together and sustains their life together.

Edith Shrum is retired. She hails from Arkansas and was encouraged by local “enthusiasts” to move on, a hotbed of them actually, ready to do the bidding. When her husband, David, passed on July 18, 2013, she felt she could do no less than complete the El Camino. After all, they were both in on it from the beginning. Perhaps, then, Edith had no say in the matter, but she went along to please her mate. Now she would be pleasing her own sensibilities … and she was adamant.

“David previously owned Chevelles and Novas, but he always wanted to be different. He picked the El Camino for that reason. It was a different style and one that he knew would stand out in a crowd. We spent a lot of days at the car shows and the dragstrip looking at colors and looking at designs. David turned down lots of offers on it and often spoke of selling it. But even at his brokest moment he would not sell the car. That’s what inspired us to fix it up for him,” she said through a telephone line somewhere in Pea Ridge.

“The car was meant to see big upgrades, a big-block and a dragstrip, and he wanted to run a low quarter-mile but slow enough so he wouldn’t need to have all the safety gear. We often talked about color; it was always meant to be silver or gray looking,” she sighed. “He bought it for $1,800 in 1994 in Rogers, Arkansas. The engine was a 350 and David paid a performance shop to build a 383 for it but the motor only ran right for about 500 miles. Due to this issue, he parked it for the time being. Along the way he invested in another motor and was slowly choosing stuff for it as we went. But for David it was about family being put first and often he left his self last … so progress on the El Camino was non-existent. It sat in the shop for years after with no motor and some bad rust damage and a damaged fender.

“David was always a do-it-yourself kinda guy,” she said. “Once we lost him there was no way we could do the work needed but we wanted to complete his dream even though we had lost him. Sort of a tribute, if you will. Luckily, we found Gary Hagar at Hack Shack. It wasn’t far from our house at all and we liked being able to go see the car whenever and watch the progress. We gave Gary the info and he worked with us to make the dream car come to life.”

With Edith in charge, the plan changed: a modern V-8 with a hefty automatic behind it. She wanted something good, reliable, and easy on the bucks. She found a 6.0-liter LQ9 that would have powered a 2006 Silverado SS. The mavens at Texas Speed left the rotating assembly as it was, concentrated instead on a Precision Race Components cylinder head swap and a bumpier Texas Speed hydraulic cam to go with it, bumping output of the mild-mannered engine by 75 horsepower and 60 lb-ft with no chance of hurting anything inside.

She was looking for a solid-handling piece but not particularly one with all the jingle bells, just enough to get what she wanted. Hack Shack dropped in 2-inch drop spindles as well as control arms from tubular stock and braced it all with the appropriate antisway bar. From Edith’s vantage, the interior became a favorite, not a homemaker’s favorite, but a driver’s favorite. Hack Shack’s Brian Tripodi laid down the Hush Mat, put up the sound wall, and added the comfort of a Vintage Air HVAC system. A little later, up in Kansas, Oz Custom Upholstery did the seats and custom-built the panels surrounding.

Then what happened? “Upon entering the very first car show,” Edith said, “We won a First Place trophy in its category. I do believe David would have been proud and overjoyed. Chevy High Performance mags have always been around our house. I can’t believe the El Camino is gonna be in an issue. I’m happy about that.”

So are we, Edith, and when you tire of sitting with it and you want to talk to David about it, you get in behind the wheel, boil off down the road and drive the dang tires off it, hear? CHP