Let us bow our heads in praise of the loud pedal 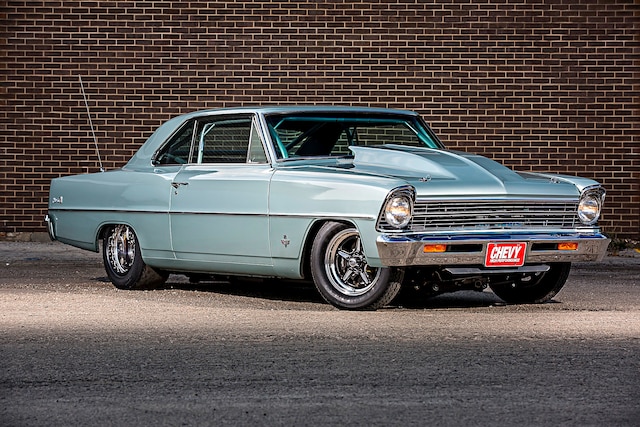 “While visiting my ’56 Chevy that was being built by Roman Performance and Fabrication,” Dennis Schroeder told us, “I spoke with the owner Ed Romanowski about the Nova that I’d spied off in a corner. Yes, I wanted what you’d think I would, a street and strip car that I could cruise to shows and to meetings with my club, the Chicago Gear Heads.”

Sure enough, this particular Chicago Gear Head soon had a pristine ’67 hardtop among his other stuff. His vision was nothing if not ambitious, so much so that veteran Romanowski actually did a double take. But it was all natural causes, all legitimate. Dennis got snared in the never-ending spiral when he was a little man because his dad worked on cars and raced them, too.

Romanowski set the older Chevrolet aside. The Nova stayed right where it was while Ed made his plans, set this thing up for a goliath engine swilling pump gas and to anticipate cruel output that was never meant for a unibody paper cup.

We’ve lived with a 632-cubic-inch honker. It was a real torque-pig, a real spark-plug gobbler that was excessively noisy and made you sweat. And if you tipped the throttle a little too much the car completely swapped ends quicker than you could blink (the locals near our shop followed its progress and loved this unruly quality). It wasn’t a place that you dreamed of, not some place you’d want to be in for very long with that character gnashing in front of you just a few inches away. For abiding that abuse, we gotta hand it to Dennis, then.

Ed began making moves, set the stage for the new suspension, which entailed adjustable spring mounts, a notched framerail, mini-tubs, and custom mounts for the AFCO shocks. Familiar Heidts Mustang II components grew from the Heidts spindles and were joined with QA1 shocks and an antisway bar to promote wheel control and minimal body lean. The Heidts assembly includes a power steering rack.

On the rubber-burning end, Ed based the suspension on Calvert split mono-leaf springs and Competition Engineering Slide-A-Link bars. AFCO shock absorbers are attached to a Moser M9 housing packed with a nasty spool and nastier 35-spline axleshafts. To fit the package, Roman Performance relocated the Calvert leaves a few digits inboard.

If you suspect the mega engine by itself wouldn’t be enough, you have to have an ace in your back pocket, an equalizer, a burp gun to bring to the gunfight. Dennis’ ace is a black canister settled in the trunk. Noted juice-tuner Jeff Prock installed and tuned the Applied Nitrous single fogger system.

Brian Doss at Speed Service built the bullet and tweaked that nuts-only engine to 942 hp and 818 lb-ft on 93-octane gasoline. Don’t know how much more power is available under the influence of race gas or the juice shot, but according to Dennis, the Chevy II runs really nice, like low-8s at 170. He maintains consistency with a Turbo 400 that Dave Klaput built at Proformance Racing Transmissions in Woodstock, Illinois. Now for a brief commercial message: Dennis is thankful for the help and encouragement he got along the way, and especially from his wife, Susan; his children; and the folks at Roman Performance; Speed Service; and Proformance Transmissions.

Before Dennis had even taken the keys for Romanowski’s ex-Nova, the car had thoroughly massaged sheetmetal and a sanitary engine compartment with an original but naked firewall and straight, flat inner fender panels to showcase the fat Rat. So he’d done that. Then he painted the exterior a pleasingly odd Sea Foam Green that doesn’t incite. Rather it represents an oasis, and one that tacitly mutes the chaos seething beneath. The bumpers weren’t tucked and the original exterior hardware (mirrors, door handle, etc.) went unmolested, but the seams were drawn straight and true. The adjustable suspension made it easy to set the stance.

Where Dennis forms his purview, counts his options, and lays the loud pedal has stayed basically the way it came from the assembly line. He left some whimsy in there, retained the original panoramic speedometer. Close by his throttle leg he gathered a bunch of AutoMeter gauges as well as a tachometer and a shift light alongside the B&M ratchet. For the minimal interior details, he passed the pile to Guzz Design, Inc. Guzz made a lot out of a little. Dennis is braced by the Roman-built 10-point ’cage that frames the interior and is tailored to be user-friendly, so he’s protected as much as possible and inconvenienced as little as possible.

That ’56 Chevy Dennis started off with? When the Nova’s yearlong construction began to wear on him he thought about that Tri-Five that he still has tucked away, reassuring like a warm stone in his palm on a cold day. CHP