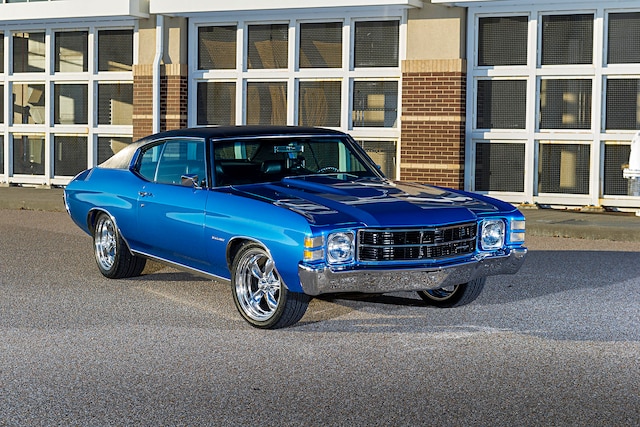 For some, cars are a personal endeavor, two hands on the steering wheel and the call of the open road. For others, the automotive hobby is a family affair with shared experiences, memories, and a lifelong appreciation of the craft. Zack and Crystal Kutilek fall into the latter category and their joint love of automobiles began with a humble Chevy truck.

“I owned a 1984 Chevy Silverado I bought from a buddy of mine that he had built with his dad,” said Kutilek. “It was a sentimental thing that we drove around in high school. When my wife and I met, that’s what we drove and we both really enjoyed it.” While a great indoctrination into the car hobby, the truck was fun but lacked the space for the Kutilek’s growing family.

“When my wife and I had a baby, we realized it was going to be a little difficult to fit a car seat in a single cab pickup,” laughed Kutilek. “We sold it back to my buddy and started looking for an old-school muscle car.” It was back to the drawing board, but the family knew they wanted a Chevy, and they knew it needed to have a functional back seat. That ruled out Camaros, Corvettes, and El Caminos. So when a Chevelle popped up on Craigslist just 10 miles from their Andale, Kansas, home, Kutilek immediately made plans to see the car.

After looking the Chevelle over, Kutilek decided to pull the trigger. It had a wheezy 307ci small-block, a TH350 transmission, and was in decent shape, the prior owner having replaced some rusted panels already, and the car was painted. A Chevy purist, Kutilek was happy that the car didn’t have much of a pedigree. “I’ve always wanted to put modern technology in an old-school muscle car, the big brakes, the air conditioning, and all that,” he said. “This wasn’t a highly sought-after car and we were going to build it the way we wanted to without worry of ruining something rare.”

On the recipe list for the car was an LS engine, the undisputed king of daily driver reliability. Kutilek came across a company called LSX For You, which specializes in LS engine and transmission pullouts, and they helped him score a 6.0L engine out of a Cadillac Escalade along with an ECU and 4L80E transmission. Kutilek treated the engine to a set of new cylinder heads and a lumpier camshaft from Texas Speed for a little more hustle.

With the new powerplant in tow, the original engine was removed and the new LS dropped into place. The swap took about a year to accomplish, with Kutilek using whatever time he could find in between his full-time job and now two young daughters, making the most of the time when normal humans are fast asleep.

“There were many late nights, staying up till 2 a.m. or 3 a.m. in the morning—sometimes till almost daylight,” he said. “I realized that was probably a bad decision as my wife and kids were going to be waking up soon and I was going to be hurting the rest of the day.”

With the swap now complete, Kutilek reached out to an old buddy, Brandon Moreland, who had, unbeknownst to him, taken up fuel-injection tuning via HP Tuners. The fuel and timing maps were smoothed out to accommodate the new cam and head package and the car started and drove better than the original engine ever could have. An estimated 500 horsepower at the flywheel was an extra perk.

With a fully functioning drivetrain, it was time to make the car look as good as it sounded. The body was already pretty sharp, but it had some road miles and the associated bumps and bruises to match. A little paint-less dent repair by Josh Mikesell helped iron out the road dings. Next, the factory LQ9 intake was too tall to fit under the factory hood so Zach Noel of 20x20 Hot Rods added an AMD cowl-induction hood and sprayed it to match the car’s PPG Bright Blue Metallic paint. A four-stage sand and three-stage polish gave the Chevelle a mirror shine. A set of American Racing Torq-Thrust II wheels shod in 18-inch Nitto rubber round out the car.

“There are a lot of builds out there where people shave the firewall and hide all of the sensors and coils. That wasn’t what I wanted,” said Kutilek. “I wanted the car to look like something Chevrolet could have put out of the showroom.”

Mission accomplished. The Chevelle has an almost factory-grade appearance about it that screams, “drive me,” something the Kutilek family does often to shows, cruises, and even the grocery store. “We’ve had the trunk completely loaded up,” laughs Kutilek. Like most projects, the Chevelle will never be done. Kutilek has plans for a tilt steering column and to take advantage of the ECU’s built-in cruise control function. Though he does say anything bigger than that and the family will likely take on another project build. Here’s to years of happy miles, memories, and family wrench sessions. CHP

An Inside Look at Roadster Shop’s Fast Track Chassis