Sweet-Looking 2012 Camaro That Makes Over 1,100 Horsepower

How Johnny Matney realized American performance was his true passion 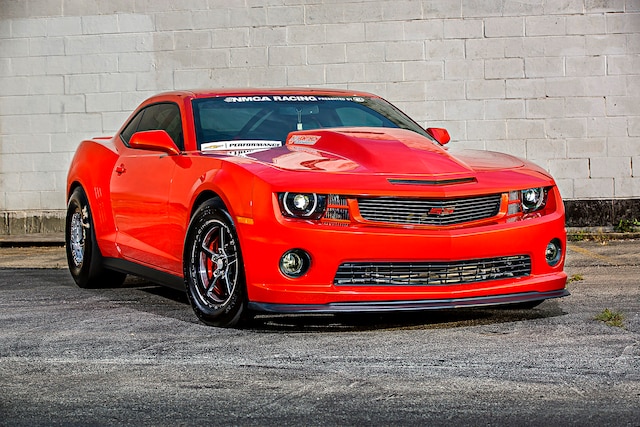 Stuff’s been going on for a lifetime nearly, Johnny a part of it without even knowing it. So what is he, a hot rodder by birth? Sure, his pop Kenneth Matney had a racer, a 1968 Chevelle … but he gave it up not long after his son was born so he could have more money for the family. “When I was little we would still go to the racetrack and car shows,” Johnny said. Though he wouldn’t be affected by this until later in life, the exercise woke Johnny to the care and nurturing that makes a family strong, that kids and animals come first.

Because of his father’s influence, he was “always into American cars and had my share of Mustangs and Camaros, and even a 1994 Corvette. When the import scene became huge, I took a big turn and decided to build a show car. I focused all my attention on building a showy 1999 Acura CL.” Thankfully, the notion was short-lived and eventually focused Johnny like a slap across the face. “After accomplishing what I wanted: multiple Best of Shows and over 100 awards, I decided to go back with my true passion: American performance.

“I wanted to buy and build a car that my father and I could have some fun with and go to the racetrack. In Feb. 2012, I purchased my 2012 Camaro SS new. Within 4,000 miles it already had a cam and headers. Needless to say, I wasn’t worried about the warranty. I got partial sponsorship from Vortech in January 2013, but life was sidetracked after my father passed away three months later. He never got to see what the car has become, but I know he would love it.”

Harried, Johnny took a break, trying to figure out what to do next. Well, our hot rodder decided to keep going with his dream of building what he thought would be the ultimate street/strip terror. “Even though the car is making a ton of power, it’s trying to get it to the floor that is challenging with the six-speed manual. The current setup is about a year old and I haven’t got much seat time with it, but the car should be capable of low 9-second elapsed times, even at its hearty 4,400-pound weight with driver. The car has run 151 but not with the elapsed time to match. As part of the drag race preparation so that the Camaro would accept 15-inch diameter rear wheels, Johnny incorporated a Carlyle Racing 15-inch conversion consisting of revised lower control arms and trailing arms, bushings, brake discs, and four-piston caliper kit.

“I ran the NMCA series in the Street King class. I only made a few appearances during the 2018 season but still finished 10th in overall points. Instead of bouncing around in different classes, I plan on focusing my attention on Street King for 2019. I have always been a street kind of guy so the whole index thing is new to me as well.”

Perhaps the most important dynamic in this little drama is the relationship between Johnny and his very close friend Erin Bielat. Erin helps him at the track, becoming the key to a good racing day, assuming the duties his father would have as the crew chief. “She helps line me up in the groove and in the water box,” said Johnny. “She checks air pressure and tire temp and knows all about the tools we’ll need and on top of that she always gives me words of encouragement. She also records every run I make so we can learn from what we see on the tape. Without her it would be very hard to be a one-man show. She does pretty much whatever needs doing.” He says that the other woman in his life, his mom, has always been behind him as well.

There is also big life that has nothing to do with the racetrack. Johnny says he keeps the car show-ready and has won multiple awards. “I do receive a lot of ‘you don’t race this, it’s too clean’ comments,” he said, “but I just smile and say ‘yes I do, but I take a lot of my time to keep it looking the way it does.’” As production manager of Ultimate Paint Shop 2 by the big lake in Highland Park (Illinois) there are certain perks involved concerning the physical appearance of the SS. Although the paint is original, Johnny had the body add-ons (splitter, hood, and deck spoiler) sprayed to match. The car still has air conditioning and heated seats and averages 7 mpg street driving on the E85 mix. The street tune-up runs on 93-octane and still generates a noxious 902 hp above 818 lb-ft of grunt right down there at the tires.

Most certainly, Kenneth Matney would have been proud and honored at the dragstrip and at the car show, but his most important contributions were the love and the life skills he imparted to his son. Johnny’s best memory was the look on his dad’s face after the first drive on the supercharger. Yeah! CHP