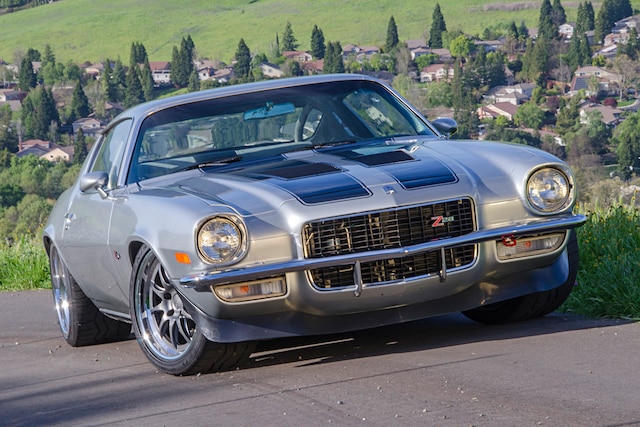 If it takes a village to raise a child, as the old African proverb goes, what does it take to build up a 1970 Camaro? In Bryan Battaglini’s case, it took some help from his family. That and a stroke of good fortune in coming across a rompin’, stompin’ LS3 good for 505 horses at the wheels. How he got a screamin’ deal on that engine is something every CHP reader dreams about, and we’ll get to that shortly. First, what led up to this project?

Bryan has owned many first-gen and a few second-gen Camaros over the years, along with a slew of other projects, so he wasn’t shy about tackling yet another Camaro that he came across in Washington state. But Bryan discovered that the owner’s daughter was driving the car regularly and she had become very attached to it. Upon finding out that he planned to take it home, her reaction was not entirely unexpected.

“I thought she was going to cry,” he relates. To soften the blow of her impending loss, “I told her it was going to a good home,” he notes. Indeed it was, but she probably didn’t realize just how much lavish attention it would receive.

At first, Bryan drove it stock for a few months. Upon going to the SEMA “candy store,” as he calls it, everything changed. That’s when the first family member got involved. “My cousin and I went and saw lots of custom stuff I could do,” he recalls. “We came home and tore the car apart.” (Good thing the previous owner’s daughter didn’t see this phase of the build, though). They fitted in coilover shocks, new control arms, a four-link rear suspension, disc brakes, billet rims, a five-speed transmission, and a 383ci engine. “Now it’s really fun to drive,” Bryan enthused. “We went to shows and had lots of fun. I emailed the old owner’s daughter and sent her pictures to show the changes I had made and she was pleased.”

The next year at SEMA, Bryan was introduced to Optima’s Search for the Ultimate Street Car series. “Now we’re talking,” he said to himself. And then asking, “Why not run my car and see what it will do?” He entered the series at Laguna Seca, Thunderhill, and Fontana. He had a lot of fun but got beat pretty bad. The other cars had better everything; so back into his garage shop it went.

For a tighter chassis, Bryan ordered a Speedtech subframe and torque arm. “My son Dylan and I assembled the subframe and pulled the old one out and installed all the new components,” he notes. “Next, I had Kurt from Hill’s Rod and Custom in Pleasant Hill, California, do a full trans tunnel for a T-56 six-speed and mini-tub the car for big tires.”

He then came across an even more serious mill than the 383 he had been running: a Kenny Duttweiler 427ci LS3. Normally, a built engine from a name builder would cost a pretty penny, but a magazine had sponsored this high-end LS3 and was raffling it off. The winner was an import performance shop that simply had no use for it, and promptly put it up for sale for a great price.

“All the internal parts are the best of the best,” Bryan notes. “There was never a chance of hurting that engine since it was built for a supercharger or a turbo, with low compression.” Even so, with the engine in hand he tore it apart and found that the rings were glazed over from heat damage. He put in new rings and changed the oil pan to clear the Camaro’s aftermarket subframe.

Bryan’s buddy Steve Walesky rewired the car, and Scotty at Minute Muffler fabricated a custom exhaust. With 500-plus ponies on tap, the car was more than just another pretty face. But beauty can also run way more than skin deep, so he had Dale at King Kustom Kovers in Hayward, California, handle the houndstooth and black leather upholstery. The Recaro buckets are surrounded by a RideTech TigerCage and fitted with five-point harnesses. To monitor engine vitals and provide data logging, the dash has a custom insert with a Racepak IQ3 digital system.

Add to that a custom audio system with Bluetooth and a 10-inch subwoofer. “What’s a race car without a stereo?” Bryan asks with a big, mischievous grin. He also has some words of special thanks to “my 13-year-old son Dylan for helping me build the car in our garage,” he says. “And to my wife, Kelly, and daughter Haley for letting me play in the garage all those late nights.”

“Looking back on the project, the car snowballed on me, but I can’t leave anything stock,” he admits. Once he completed the car and ran in Las Vegas at another Optima event he was a lot more competitive with the other players. But it’s not an issue of spurring out more horses. Now it’s just a matter of getting more seat time and figuring out how to get the most out of it on the track. “I love the car and very happy the way it turned out,” he smiles. “When people comment on the car, it’s nice to see my family appreciate it as well. My son, wife, and daughter were all helpful throughout the build.” And that’s what family is all about. CHP