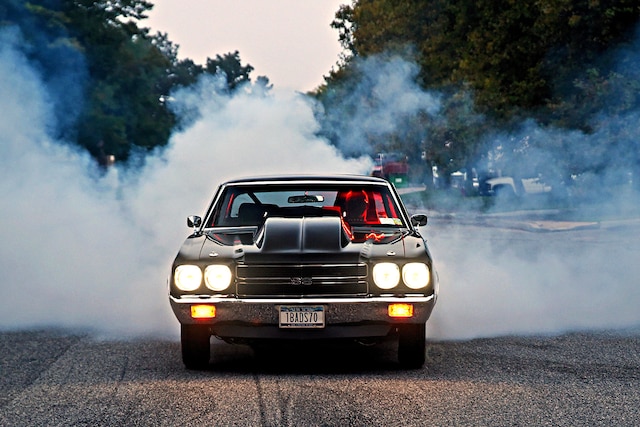 Keith Seaman grew up on Long Island and was raised by his dad, who had a very cool ’64 Corvette. “We would always go on rides together, and so that jump-started my love for classic and muscle cars, and, of course, Chevys in particular,” says Keith. That love would escalate over the years, till the age where the young hot rodder could capture a car to call his own.

“I bought my first Chevelle at age 15 and have had about 20 since, but me and my dad would hang out in the driveway and wrench on my first one together,” continues Keith. It was certainly a motorhead’s way of life being forged at home, although sometimes his other parental unit didn’t appreciate it much. “We would get engine parts and pieces and set them up on the dining room table, which didn’t make my mom too happy,” reminisces Keith. But hey, you gotta do what you gotta do to get the project done. I’m sure good ol mom has forgiven the pair for their family’s galley takeover.

From there, Keith took in all the hot rod gatherings and car shows he could fit into his schedule, just trying to gather as much knowledge as possible. He feels that his information collecting paid off in the long run, and went on to boost his knowledge tenfold about the rights and wrongs in the field car customization and fabrication.

Now, that well-paved path Keith followed in life has brought him to where he always wanted to be. He now owns KMS Kustoms in Ronkonkoma, New York; a shop specializing in building big-power muscle cars and the like. KMS does it all; from engine rebuilding to body mods and paint, and even building all-out race cars. “It’s a one-stop shop,” says Keith.

Big Build
In his teens, Keith built up a sweet ’70 Chevelle SS as his first ride. He cherished that car for years, but when it came time to open up his business, Keith decided he needed to rely on the funding that selling the hot Chevy could bring. So the car was sold-off to start KMS. But it didn’t take long for him to get back into another A-body.

The way Keith found his next Chevelle was pretty funny. “I was just shootin’ the shit, talking to my buddy Anthony Capps and I asked him if he knew of any ’70 Chevelles for sale locally,” says Keith. Wouldn’t you know it; his friend had one stashed away on his property. So Keith offered to take it off his hands, which he quickly did. In return, his friend asked for nothing. “Just take it,” he said. Now that’s a true friend for life!

So Keith brought it back to his house to turn it into his dream Chevy. The first thing they did was to tear it down to bare metal, back-halving the car in the process. From there they started massaging the Chevelle’s panels to perfection. Since he knew he was going to paint it black, it had to be perfect. “We first cut off both quarters and replaced them with new ones,” says Keith. From there, modifications were made to the body to handle the big meats he was going to stuff out back. “We opened up the wheelwells six inches and then fabricated handmade moldings to fit them. I wanted the car to have a stock looking appearance,” states Keith.

One extra aesthetic punch was in the form of a custom cowl hood. “It was 2001 and I was the first person to receive a custom Chevelle cowl hood from Glasstek,” Keith proudly states. Once that was added to the mix, the car was prepped for paint. Keith sprayed the flanks with PPG Jet Black 9700; five coats of base and six clear. “It’s my favorite color; my first Chevelle was black, so I wanted this one black in the worst way,” recalled Keith.

From there, the process of installing all the new goodies started. The shell received a fresh new interior, which is somewhat stock, aside from the Dakota Digital gauges, driver’s seat, billet steering wheel, and aftermarket shifter. A full 14-point rollcage was built and tucked up high and out of sight to keep all safe while still appearing close to stock. “I wanted it to look and feel like an old-school muscle car,” Keith admits. From there, the car started to take shape as more pieces of the puzzle started to flow in. That first build culminated in a full feature right here in Super Chevy. It was the summer of 2008, but little did Keith know that was just the appetizer for what was to come.

Big Power
The powertrain for this massive muscle ride was known in advance. “We started out with a 632 in the first incarnation of Big Black. I’m now on motor number three, which is a 647ci monster that runs on pump gas,” says Keith. All the engine work was done by Scott at Merkel Racing in Hauppauge, New York.

Big Black’s big-block power starts with a Dart M block, put together with a Callies crank, Oliver rods, Diamond pistons, and a compression ratio of 11:1. The cylinders are topped with 14-degree Pontiac heads, built with titanium valves. A 55M camshaft and Jesel solid roller valvetrain keeps it all running in sync. A custom sheetmetal intake is topped with a pair of Chuck Nuytten 1,400-cfm carbs. Direct port nitrous is fed by a Speedtech 250-shot of the liquid supercharger!

The roughly 1,200 hp is shifted by an M&M Promod Turbo 400 with a 10-inch converter. It’s sent out to a Fab 9 rear with a 9.5-inch billet centersection stuffed with 3.89 gears. The big meats mentioned before are 33x22.5 Hoosier Street tires wrapped around custom three-piece Weld wheels with special beadlocks to hold the massive rubber. The fronts are skinny Weld 15x3.5 wheels shod with 29x4.5-inch rubber. Strange Engineering brakes all around do the stopping.

Adjustable Menscer coilovers handle the suspension duties. TRZ Motorsports upper and lower control arms were added to increase strength and reduce weight. Chromoly wheelie bars and a parachute are installed when this beast hits the track. Keith also added lots of subtle bling to this ride: Oracle halos up front, Digi-Tails taillights out back, Ringbrothers billet hardware and hood hinges, and plenty of carbon-fiber accents all around. Custom airbrushings adorn the underhood and firewall. “I like skulls,” says Keith; and this car’s got plenty of them.

Once completed, Big Black has seen plenty of track time, racking up low 8’s while pushing out a steady 1,200hp stream from its nitrous-enhanced big-block. For now, Keith is happy with the way his stealthy Chevelle looks and performs and has no plans to modify her again. This beast will continue to enjoy her time out on the streets of New York under the guidance of master Keith. But who knows, maybe Big Black will become even bigger one day and evolve enough to warrant a third feature. We’ll just have to keep an eye out.