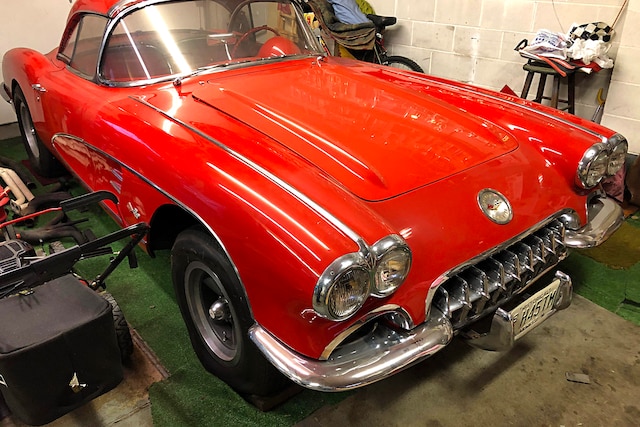 How did Jim Paine find and buy a 1960 Corvette with original paint? The car was not advertised. Corvette crazies want to know how he got this opportunity and not them. Is there a method to follow here or is it just dumb luck? “I got a call from my friend Gary in Canton, Ohio,” Jim Paine said.

Paine collects vintage Corvettes, and more than one of his friends knows this. One of them is Gary. Gary was friends with Barbara Masuch in Canton, Ohio. Barbara’s husband, Fred Masuch, had recently passed away and left a cherry 1960 Corvette in his hobby garage.

Gary told Barbara about his friend Jim Paine in Pittsburgh that loves Corvettes and that maybe would buy the car. There was one caveat. Fred drag raced and was serious enough that in 1970 he swapped out the stock 245-horse, dual-quad 283 for a 427. Paine would not be interested if the frame or body had ever been altered, but he was excited enough to drive 2 1/2 hours in pouring rain from his home in Pittsburgh to meet Gary at Barbara’s house.

In between two old houses was a detached, two-car garage. Inside, he gazed with wonder at a Roman Red 1960 Corvette, which was absolutely stock looking except for four black wheels. The right front tire was flat and the other three were very low. “We put air in them right away and then I took a picture,” Paine says.

Paine’s first impression was he would love to buy this car. It looked original, but what about that 427?

Popping the hood revealed what looked like a factory type installation. With the car, Paine found a Chevrolet Engine Conversion Kits book from Bill Thomas Race Cars out of Anaheim, California. Thomas was famous for his conversion kits that would swap a small-block out of a C1 Corvette for an iron block 427, making an instant supercar.

Apparently, Fred had purchased a conversion kit from Bill Thomas Race Cars for a clean 283 to 427 swap; no cutting or welding required. “Barbara was very kind and nice, but very reluctant to sell at that point.”

This is understandable. Paine was lucky to be here and looking at the car. Months had passed after Fred died before Barbara could even let anyone inside that hallowed garage.

Paine visited with her about the car for several hours and struck up a friendship. She even showed him the trains her husband collected.

The 1960, Paine learned, was her husband’s pride and joy. Fred bought the Corvette in 1963 from the original owner right there in Canton, Ohio. He and Barbara were dating at the time.

Fred started to drag race the Corvette in the late 1960s. “His best e.t. was in the high 12s. He won many trophies. It was his toy car and he kept it in the garage.”

Inside the trunk, Paine found the original plywood board that went over the spare tire and a placard from 1970 when Fred did the 427 conversion. Original paint on the write-up on the placard surprised Paine.

“I asked ‘is this paint original, Barbara?’ She said, ‘well, we never painted the car. That’s how we bought it. We bought it when it was 3 years old.’”

Paine pulled the weatherstripping back and looked under moldings and inside door latches and could find no evidence of a repaint.

This provenance explains why the car looks so stock. Until the hood is opened, the 1960 Corvette appears vintage but for a set of mag wheels.

With the car came the original engine, the 245-horsepower 283 dual four-barrel, and the stock BorgWarner four-speed.

Once Paine got the car home he had to decide whether to pull the 427 and Muncie four-speed for the original drivetrain.

A friend in St. Louis told him, “Jim, you got to leave it alone.”

A Corvette collector in Kansas City offered him $12,000 for the engine and transmission.

Paine has decided to leave the 427 intact and rebuild the 283 and four-speed, which he will place on an engine stand and leave in his shop next to the 1960 Corvette. Vette

This 1960 Corvette, seen here as found, is probably the best original C1 with a Bill Thomas 427 engine swap kit. In its present 427-conversion configuration, we believe this car is a piece of Corvette history, which the hobby has Fred Masuch to thank for saving.

This vintage photo reveals a bygone time in America when straight-axle Corvettes and Tri-power Chevys ruled the streets. With the advent of the big-block Corvette, C1 owners counterattacked with the 427 swap. (Photo courtesy Barbara Masuch)

Jim Paine was amazed that the original dual four, 245-horsepower 283-cubic-inch V-8, complete with air cleaner assembly and exhaust manifolds, came with the Corvette. He also got the original BorgWarner four-speed with the car.

This 1960 Corvette is ready to drive as found. The odometer reading is 60,000. Paine will leave the 427 and the Muncie four-speed. Essentially, this 1960 is more interesting and valuable as a Bill Thomas special, featuring the vintage engine swap kit.

Paine was intrigued to find this Chevrolet Engine Conversion Kit book with handwritten notes, obviously by Fred Masuch, reading, “Shipped 3/27/70” and “Called at 6:00 p.m. on 3/31/70.”

Fred Masuch bought this Corvette in 1963, but did not install the 427 until 1970. He drag raced the car in south central Ohio.

These are the wheels Fred Masuch installed on his Corvette.

Paine got this old print ad for the “Tenzaloy” (a type of magnesium alloy) wheels that Fred Masuch purchased for $50 each in 1965 from Wheel Centre Company in Walnut Creek, California. They are still on the car.

These timeslips reveal how fast a 1960 Corvette was with a 427 swap back in the day. The speed shop business card adds nostalgia.

The interior looks stock except for the Hurst shifter, which is connected to a Muncie four-speed and a set of 4.88 gears and a Positraction differential.

Will this 1960 Corvette outrun a 1967 Corvette with the same 427 Tri-power? Straight-axle owners want to know.

Parts derived through both Chevrolet and Bill Thomas Race Cars were designed specifically for the C1, straight-axle Corvette, as preserved in this 1960 model.

Straight-axle Corvettes, like this 1960 model, which came stock with a dual-quad 283, had a swagger like no other car on the road in the 1950 and 1960s. You can just see it in this vintage photo. (Photo courtesy Barbara Masuch)