When the mere appearance of performance simply won’t do 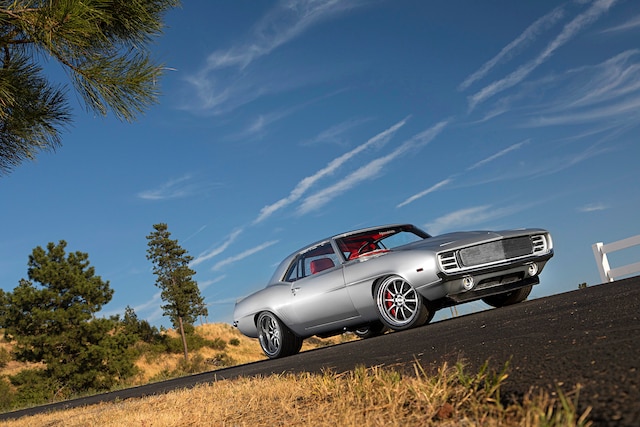 This may come as a surprise, but the total performance of a car is more than the sum of its parts. I mean, yeah, exotic gear can make a car impressive. But after two decades featuring what are considered the industry’s finest examples of their respective breeds, I’m here to tell you that you’d be shocked at just how poorly some of these cars actually perform. To put it quite literally, parts horses look strong only on paper.

And while most of us can justify a car that only looks and sounds good, some can’t. Imagine, for example, if a renowned NASCAR team owner showed up to an autocross with a car that sneezed or loaded up or couldn’t do a lap without killing every third cone. You’d laugh. And that’s bad for business.

So when Rick Hendrick set about to build a Pro Touring car a dozen or so years ago, it made sense that he wanted something that could actually uphold the promise that its parts made on its behalf. Most of us would have assumed the obvious choice was for Rick to have Hendrick Motorsports build a car. But sidetracking your moneymaking side to indulge your fantasies is also bad for business. Rick needed someone who could build a race car that merely looked like all the fancy cars that appear in magazines.

He found his candidate in Kent Waters. “I came out of NASCAR,” he begins, describing his 14-year career with Bill Elliott. “Growing up at the Elliott shop, I got to work in the chassis shop, the paint-and-body shop, the engine shop. That put me in the position to build a car from scratch.” But when Elliott sold his team, Kent shifted careers and started building cars from scratch. “I took all the stuff that I learned in NASCAR and applied it to hot rods. The measurements and the metalwork transferred over into this.” The project was actually an evolution of an existing relationship. “I went with him as a consultant to several auctions to buy a lot of cars,” Kent continues. Inevitably, they started bench racing. “At the time he was building what’s known now as Hendrick Performance,” Kent says (it’s the hot rod/muscle car arm of the business). “They didn’t have their deal quite up and running then so he was hiring people like me to build cars.”

What makes the car Kent built for Rick special is largely invisible at first glance. For example, Kent cut out the floors and welded 3x3 tubing along the inside of each rocker panel. “That’s not a console down the middle,” he explains. “It’s actually a spine that runs the length of the body. All that stuff in the back seat, that’s all welded to the car.” An 0.085-inch-wall 4130 ’cage turns the car into a space frame of sorts. “That car’s a full chassis car, but the body is welded to it. We were doing everything we could to make the car as torsionally rigid as possible.” He also welded every seam in the car. “There are no more spot welds,” he says.

As race car builders are known to say, reducing weight is like adding horsepower. So to offset all the tubing in the car, Kent nibbled where opportunity arose. “Whenever I took the skin off the car, I drilled the inner structure,” he says. “That took like 150 pounds out of the body.”

The weight-loss regimen extends to what bolts to the body. He replaced the fenders, trunk lid, and bumpers with aluminum proofing (prototyping) panels from Auto Metal Direct. Anvil made the hood from carbon fiber. If a part could be rendered in lighter composites, Kent had it done. For example, Hendrick splashed the billet Anvil front apron opening and made a new one from carbon fiber. The same goes for the gauge insert that Kent originally made from steel. Hendrick made even the taillight reflectors and the various interior closeouts from lightweight carbon. “I think it should’ve been lighter than it is but it wasn’t but 3,200 pounds,” Kent says, adding that weight distribution is almost perfect front-to-rear. And get this: similar to a race car, Kent put doors on the ends of those 3x3 tubes behind the rocker panels. “That way you can ballast the car to get the weight exactly where you want it.” Again, race car stuff.

In the spirit of tuning, Kent had antiroll bars made in diameters from 3/8-inch to 1-inch. Altering the Panhard bar height tunes the rear suspension’s roll center, so Kent made it accessible without jacking the car by a removable trunk panel. “Just like a NASCAR,” he says. Detroit Speed put the compression and rebound knobs in the reservoirs so Kent made them easily accessible from the topside of the car. “I built this car to go kick ass,” he proclaims.

Being a Chevrolet dealer, specifically one with clout, Rick was one of the first people to get the engine when it came out in the Corvette. “This was before they were even available as a crate,” Kent says. “He came down to the shop one day and went home that night and decided that he wanted that engine.” But there was only one problem: Kent built the car around another engine, and given the tight packaging there was no room for the new engine’s dry-sump and supercharger, among other things. “We had to take out all the suspension, the exhaust, all the stuff that we built, and even rebuild part of the firewall to install that engine,” he says. The exhaust port and block differences mandated new headers and even custom motor mount brackets. “All those changes took almost another year,” Kent admits.

Rick Hendrick took delivery in about 2013. He sold the car in 2017 because, well, that’s what you do when you have a rotating collection. That Rick Hendrick wanted to promote the hot rod shop that bears his name (Hendrick Performance) probably factored into the decision. The car sold to Spokane enthusiast Erik Humble who more recently passed the keys to Keith Byer.

That this car remains aesthetically viable half a dozen years after its completion speaks volumes. By emphasizing actual performance—the way a car drives, handles, and behaves—rather than the veil of performance—how flashy it looks—it’s possible to build a leader rather than just another follower. CHP