Could this be the perfect split bumper Camaro? 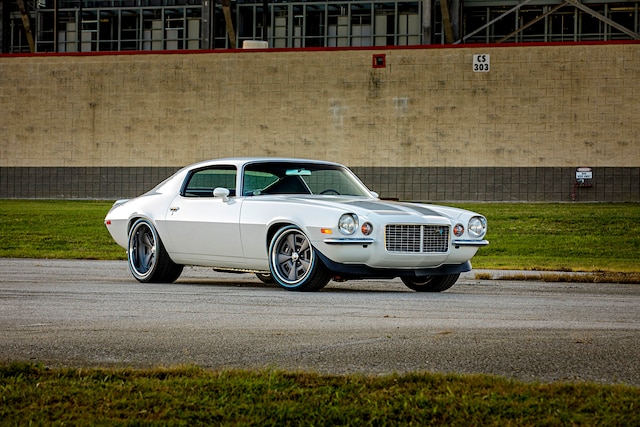 Take one LSA drivetrain and blend it into a split-bumper 1970 Camaro, and what do you get? A gorgeous creation that any gearhead would be proud to see in the garage—and more importantly, cruise down the road on any given day.

“The focus was to build a ’70 split-bumper Camaro to resemble something General Motors might have produced in 2018. The color scheme for both the Nova and the Camaro were borrowed from the 2013 anniversary 427 Corvette—Arctic White and blue leather,” says Rutter.

Rutter, who is well-versed in bringing customers’ visions to life, assembled his team and went to work designing and executing Doyle’s plan to what we think is perfection. The plan was to take the split-bumper chassis and outfit it with the LSA drivetrain from a 2015 Camaro ZL1, to use one of the most modern GM engine packages available.

One of the stipulations that Doyle had during the project’s conception was that as many General Motors original components be used where possible. After all, it’s difficult for an aftermarket company to equal the level of engineering prowess and durability testing performed by OE manufacturers. The extreme testing processes performed by the General when designing parts—from high-altitude and extreme temperature testing to vibration testing and strength testing and more—just aren’t routinely done in the aftermarket.

As Doyle’s plan was to have a vehicle he could drive anywhere, where he didn’t want to have to worry about parts failure, his idea holds plenty of merit. Couple this plan with the killer modification abilities displayed by Rutterz Rodz and it’s clear that Doyle’s plan was a solid one.

To help disguise the modern powerplant and keep onlookers guessing, a set of factory 1970 Z/28 valve covers were used. The LSA coils were moved behind the firewall and custom MSD spark plug wires were assembled and hidden under the supercharger bonnet to give the engine a traditional distributor-fired appearance.

The engine produces 556 horsepower and 551 lb-ft of torque—plenty of power for Doyle to have big fun no matter where he is. And remember that OE-level testing we mentioned? It’s on full display underhood; underneath the custom-designed radiator cover hides the radiator, cooling fans, and intercooler, which have all been adapted from the ZL1. These components provide critically important durability and performance in the west Texas heat where the car is used most often. On the front of the engine, a Concept One pulley system helps to dress up the appearance.

And what good would a killer Camaro like this one be without a man pedal? The TREMEC T-56 six-speed transmission utilizes a Chevrolet Performance clutch kit and custom-built driveshaft to send the power to the Detroit Speed 9-inch housing, complete with 3.70:1 gearset.

Part of what makes an old-plus-new combination like this one so special is the use of modern suspension components, which offer performance unlike anything possible—or even considered—in 1970. One of Detroit Speed’s hydroformed front subframe systems incorporates spindles, A-arms, springs, and Detroit Speed/JRi coilover shocks in the front of the Camaro. A power rack-and-pinion combines with the splined sway bar to offer modern performance with the ability to bolt right into the chassis in place of the original 1970 subframe system.

In the rear, Detroit Speed’s QUADRAlink suspension system was installed, which uses their unique, patented Swivel-Link suspension configuration. In the Swivel-Link system, the control arms feature unique, internal spindles on the rearend housing end, which prevent the suspension from binding, a problem in traditional four-link suspension designs. Detroit Speed/JRi coilover shocks are used here as well. Additionally, a Panhard rod is used for lateral housing location. Wilwood brakes are at all four corners.

The wheels are custom one-off pieces crafted by Chris Sage at The Wheelsmith and measure 18x10 in the front (7.000-inch backspace) and 20x12 in the rear (5.875-inch backspace). Michelin Pilot Super Sport tires are installed with 285/35R18 skins up front and monstrous 345/30R20 hoops out back. Diamond Back Classic Radials modified the tires with the blueline appearance. To fit the steamroller rear tires, a set of Detroit Speed mini-tubs were installed.

“A huge tribute to the modern versus old theme are the 18-inch front and 20-inch rear Z28 replica wheels. The blueline tires were something we first used on our Nova and were a huge hit so the decision was made to use them again,” says Rutter. Creature comforts in a ride like this are critical, and to that end Eric Brockmeyer designed and rendered the interior, then Paul Atkins Interiors executed it perfectly. The company whipped up a set of original 1970 Camaro seats, customizing them—and the door panels and center console—in custom blue leather. The rear seat delete offers a custom storage area built right in, and black wool carpet was customized, set to fit around the myriad of interior modifications. Vintage Air’s SureFit HVAC system keeps the occupants comfortable in the west Texas heat.

Modified AutoCross gauges from Classic Instruments allow Doyle to keep tabs on the engine’s vitals, while the original GM AM/FM “blue light” radio was retrofitted with modern internals and Bluetooth capabilities by R&B Vintage Audio. A full complement of Memphis Audio gear—amplifier, front and rear speakers, and subwoofer—was set into place and wired up by Benny Broyles at Rutterz Rodz.

Jonathon Tolley and Alec Brown of Rutterz Rodz went above and beyond on the exterior, widening the front and rear wheeltubs, reworking a custom fiberglass nose from Greening Auto, straightening the body lines, cleaning up and tightening the body gaps, and smoothing the floorpans. Then, Rutter himself laid the BASF Arctic White pigment and finished off the car with the subtle graphic stripes. Dan’s Polishing Shop straightened out the chrome to finalize the car’s appearance. During the car’s construction, all of the fab work was done by Shawn Taylor and Mike Rutter, with Rutter using a Painless Wiring harness kit to wire the chassis. Chris Sutphin was in charge of the final detail on the car, finishing it flawlessly.

“We made every attempt we thought possible to bring the idea of a 2018/1970 ZL1 split-bumper Camaro from a dream to reality for Doyle. Something that he can enjoy for many years to come, something that can be driven any way he desires, and hopefully something that can withstand the test of time as far as modern hot rods are concerned,” says Rutter.

We think they nailed it.