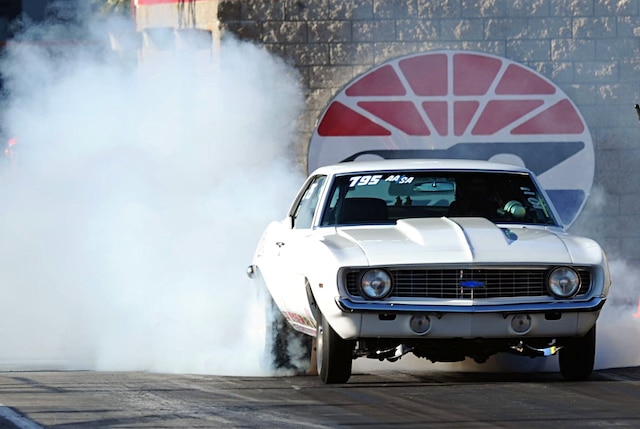 Short Track Specialists
A Can-Am racing team produced an impressive championship in the eighth-mile PDRA (Professional Drag Racers Association) series. Car owner and superb tuner Al Billes and his skilled driver Tommy D’Aprile coalesced to win the series’ Pro Boost title. Racing a Jerry Bickel-built 1969 Camaro that was converted from P/X (Pro Extreme), the dynamic duo won three times on the PDRA season tour. A strong event finish at the season-ending World Finals in Virginia affirmed their top spot in the final standings. This particular race car features a creative aftermarket engine program. Known as a “4.9,” it is a supercharged, alcohol-burning application that traces its origin and design to Australian-based Noonan Race Engineering. Throughout the season the car was dominant from a performance perspective, too, with D’Aprile qualifying Number One at all but one of the PDRA races they attended in 2018. The race car, which features a roots-style blower and a Turbo 400 transmission, was credited with a super-quick 3.62 elapsed time.

Chicagoland Sleeper
The husband and wife team of Keith and Libby Brockman race a pretty inconspicuous looking race car with which they have surprised their competition more than once. Together, the Brockmans run a nicely prepped 1972 Chevelle Concours wagon—a car seldom seen on the dragstrip. This car first hit the strip back in 2001 as a 13-second runner after being found on Chicago’s north side with only 56,000 original miles on it. Since then it has evolved and been updated. The current driveline configuration includes a Chevrolet Performance ZZ502 crate engine and a Jim Buford-built TH400 automatic transmission. Power is delivered to a 12-bolt rearend that houses 3.73 gears. The deceiving-looking wagon, which showcases some of its original Cranberry Red paint, is pretty darn quick given its overall weight (4,360 pounds), with a best time of 11.72 at 112 mph. Keith and Libby are regulars at their hometown track, Route 66 Raceway in Joliet, Illinois, while campaigning it both in ET brackets and NMCA’s Open Comp class.

8-Seconds Later
We really like the looks and detail of this highly competitive 1966 Chevy II raced by Wisconsin’s Louie Raffetto. After about a two-year construction period from concept to reality, Louie first entered his race car into competition back in 2014. It features a 427ci big-block assembled by Wagner Motorsports (Markesan, Wisconsin) that sports a Dart block and 18-degree Brodix cylinder heads, and produces over 800 hp and almost 700 lb-ft of torque. Louie applies that power to an ATI torque converter and transmission, and a rearend housing and four-link assembly from RJ Race Cars. Raffetto’s Chevy is one of the most popular entries within the NMCA racing circuit. He also runs the car in NHRA Pro and Super Pro ET bracket classes. Louie is a fabricator by trade and owns Lou’s Hot Rod Shop in Boyd, Wisconsin, so this car features his own expertise with the chassis, paint, and electrical, all done in-house. His family oriented team includes wife, Bobbi Jo; daughter Allison; and son Dominic. When conditions warrant, this slick-looking Chevy II can run in the high 8-second zone at close to 150 mph.