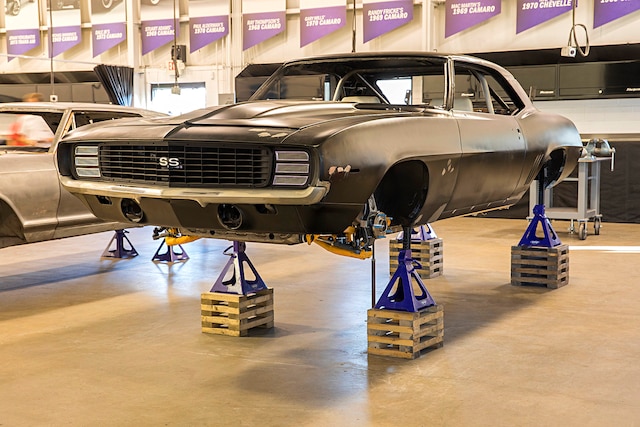 Hot rodding runs in the family for Kyle Tucker, the owner of Detroit Speed Inc. When Kyle’s cousin Dave Tucker, over in Kentucky, wanted a hot rod he knew where to turn for help. When this 1969 Camaro is finished it will feature the complete Detroit Speed first-gen Camaro catalog, a 572ci big-block Chevy, and plenty of cool.

Utilizing off-the-shelf Detroit Speed parts, the Camaro will be a small sampling of the shop’s capabilities. “This will be our bread and butter car,” said Chris Porter, projects manager at Detroit Speed.

Kyle and his team found the car in Florida. “Just an original, patina car. It needed some dent repairs and we worked out all the metal by hand,” said Chris. A bone-stock runner, it featured minimal rust and its original 307 and automatic. The team even drove it to get it registered at the North Carolina DMV office when it first arrived. Now, the car has been stripped of its original paint and shot with a satin-black sealer.

The car will be a healthy cruiser with a traditional powerplant in the form of a 650hp, 572ci Chevrolet Performance crate engine backed by a TREMEC T-56 and GearFX Ford 9-inch with Torino hubs. The wheels are Forgeline Heritage CR3 18x10 up front and 19x12 in the rear.

“A muscle car look and an old-school feel,” said Chris. “It’s mostly built for cruising, with a little bit of autocrossing; more or less something to just have fun with.”

One of the best features of the car is the heavily modified 4-inch cowl hood. A hand-stamped grille mounts at the back of the cowl for heat exiting the engine compartment, as well as a molded heat extractor with functional vents for the air traveling out of the radiator. This will keep the big-block cool during aggressive autocross sessions. The Camaro also features recessed factory steel bumpers.

The car is set for paint around the end of 2018, but has yet to have a final rendering. So the color and stripes are unconfirmed. Detroit Speed sets up and breaks in every new car before the owner takes delivery, so plan to see this car on the track before the end of next year.

Photography by the Jesse Kiser and Detroit Speed