The brainchild of an electrical engineer and an airline pilot 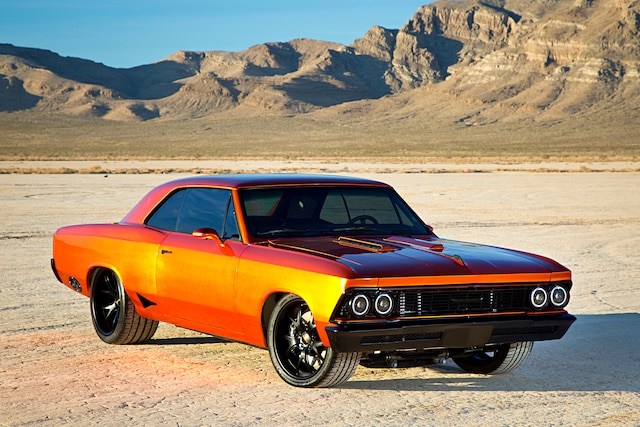 Since the beginning of automotive history, the science behind cars was derived from outside sources. For example, many of the drivetrain components stemmed from aerospace technologies, and everything from forced-induction systems to wind tunnel testing helped shape our low-altitude flying road machines. Though aviation has always been a big influence, there are several other sciences like those that formed the electrical functions of a car. So it comes as no surprise that an electronics wizard and an airline pilot would be able to combine resources to create this advanced, custom 1966 Chevelle.

Though Jeremy “Jerems” McLellan was able to create this wicked muscle car, it is actually his first vehicle of this type. You see, when he was a kid he—like most of us—had posters on his walls of exotic cars and would lie in bed dreaming about owning a vicious car that could rip on the streets. Though he admired stylish and fast cars, he grew up in a family that didn’t share the same appreciation for them. As embarrassing as it may sound, Jeremy’s first car was a Chevy Cavalier. It wasn’t something to brag about but it got him from point A to point B in a decent manner.

Jeremy curbed his appetite for horsepower by concentrating on his education in high school. From there, he went on to college and continued to suppress his urge to splurge on a better ride, as he wanted to make it out debt free. The plan panned out so far as he was able to score a nice gig keeping the electrical systems on oil rigs in working condition. For a while he lived overseas, and building his dream car was not really an option. In the meantime, he did his research and came across the MuscleCar Place podcast by Robert Kibbe. Though Jeremy wanted to build a 1966-’67 Chevelle, he was intrigued to hear that Jeff Allison of Allison Customs built a ’64 Chevelle for Robert. This was like having a seal of approval, so he called Jeff and the rest is history.

The next thing on the list was to actually find a car to start with, and as usual it started online. They found this ’66, which seemed to be in good shape and was already primered; looking like it was ready for paint. It was purchased sight unseen, and in our experience these types of deals can go either way. Unfortunately, after Jeff had the car sodablasted, he found out that the primer was hiding some major rust and compromised panels. It was so bad that Jeff considered a whole new car, but he ended up sticking with it and replacing most of the bolt-on parts, including the front clip. The only major parts he was able to salvage were the roof, passenger door, and some of the A-pillars.

Once the body was reshaped, it was on to updating the Chevelle with modern features. The frame was swapped out for an Art Morrison Enterprises frame equipped with RideTech ShockWave airbags to lift the car up to clear speed bumps. The chassis utilizes a modern front suspension with C6 spindles, sway bar, and Detroit Speed rack-and-pinion steering. The four-link houses a Strange 9-inch rearend with a full floater kit for better durability. Lastly, a set of 14-inch brakes were attached on all four corners along with a set of Boze Clutch Concave wheels with Michelin rubber.

Next on the list was the powerplant, and Jeremy wanted something that really had some kick to it. He chose to go with a modern 650hp/lb-ft supercharged LT4. This was a few years ago when components to make them fit in an application like this didn’t exist. One of the problems was that the accessory drives on these Gen V small-blocks don’t have a power steering pump. Drive Junky was able to work with Jeremy and made a system that would not only fix the problem but improve its styling. Then, the LT4 was backed by a TREMEC T-56 Magnum manual trans with reverse lockout, all from American Powertrain. For the rest of the car, it had to be modified to make it unique. For starters, the driprails were recessed in order to retain some of the original shape, but in a cleaned-up version. The doors were also cleaned up—but not shaved—as mechanical door handles are very reliable. Kindig-it handles were used to get a stealthy look without having the risk of being locked out if the battery ever dies.

On the lower sides of the rear body, air ducts were put place to cool the brakes. These were influenced by Jeff’s passion for aviation, and the shape is similar to what you would find on an aircraft. Underneath, the front inner fenders and new rear mini-tubs were expanded to fit the 9-inch-wide front and 12-inch-wide rear wheels. The exhaust was run through to the rear sides of the body so the trunk had to be modified with false floors to fit the tubes. To get the color Jeremy envisioned, he called House of Kolor direct and was referred to master paint mixer Jim Hetz. With several spray-outs and debate, Jeremy realized the first batch of the custom-mixed Tangerine Kandy was the right combination of color and depth. Then it was painted and balanced with just enough pieces powdercoated matte black to give off just the right amount of accents.

Modern was the theme on this classic muscle car that included details on the interior. First, a new center console was added as well as electric seats from a 2006 GTO. Then, Generations of Design was able to reupholster the entire inside in black leather with orange stitching. Afterward, it was upgraded with Speedhut Revolution gauges, electric windows, Vintage Air A/C, new audio components, and a four-camera system that can be viewed with the Pioneer 7-inch touchscreen head unit. Since Jeremy is an electronics guru, he wired it all with a Ron Francis harness kit.

As the car approached completion, Jeff found a spot for it at the 2018 SEMA Show. Even though the build had gone on for a few years, the SEMA deadline is always a harsh one to face. The crew got it done and it was an absolute hit.

It was a long wait, but Jeff was able to make Jeremy’s dream car a reality—one we absolutely dig. CHP