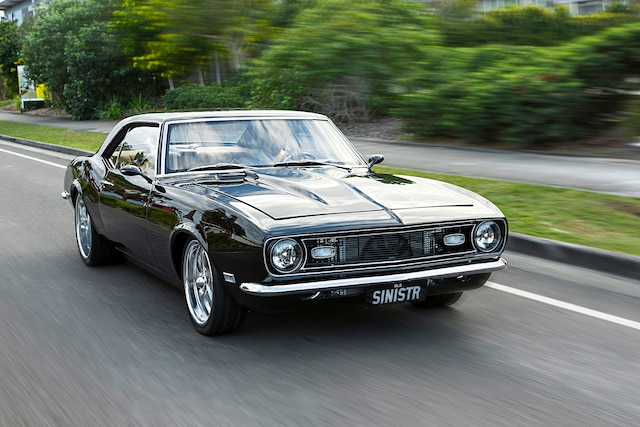 This is not a new story. Countless custom cars that find their way into glossy publications like this one started with more humble intentions, only to end up a long way down the road to being bona fide show cars.

For 47-year-old Aussie Steve Hopes, the original plan was to build a Pro Touring-cum-track car—although granted, even that was going to be something pretty special. How special? How about a 640hp, 540ci all-alloy big-block up front and a full Street Rod Garage SRG-Force chassis out back?

But we’re getting a little ahead of ourselves. Steve already owned a neat ’68 Camaro driver, but he deemed it too nice to chop into a million pieces. With that car sold, he found a six-cylinder ’68 in the States with its original purchase receipts and had it shipped Down Under. Steve says it was “pretty average.”

Average seemed OK at first, given Steve’s intention to replace the entire undercarriage anyway—although, he soon found that much of the bodywork was little more than Swiss cheese. Ultimately, he’s replaced almost all of the car’s original panels.

The real turning point for the direction of the build came when Steve bolted in the new SRG-Force chassis, complete with QA1 coilovers, that he had custom fabricated. “The SRG chassis is one of the best-looking and engineered chassis on the market,” he says. “I told them the wheel offsets I was using and they custom-built the complete rolling chassis for me, diff and all. I was really surprised how well it all went together; the tires fit the guards perfectly.”

However, Steve wasn’t so happy about how the car sat with the new chassis underpinning it and came to the conclusion that the only thing to do was to cut out the entire floorpan and channel the body another 1.5 inches. From here things began to snowball. Before long, the rear wheeltubs and firewall were gone, too. The quarter-panels were extended and wrapped right under the car to form a single, smooth section. Steve also hid the exhaust mounts to give the impression that it was floating. The truth is that very little of the car’s body was left untouched; from hiding the wiper mechanism to the custom side mirrors.

With a new stance and fresh level of intensity facing the project, Steve decided the alloy big-block was no longer the right choice for the Camaro and he found a replacement in Nelson Racing Engines’ sublime-looking 1,451hp twin-turbo 406ci small-block stroker. Given the gorgeous symmetry inherent in the design of the engine’s top end (complete with billet Alien twin-throttle manifold and symmetrical-design 72mm NRE turbos), Steve decided that’s what the rest of the car would now need, as well. “I wanted everything to be symmetrical,” he says. “From the turbos to the back of the car—it’s all symmetrical.”

Inside the boosted small-block you’ll find JE pistons, a Callies crank, Oliver rods, and a Comp valvetrain. The heads are Brodix CNC-ported pieces and backing up this monster mill is a Rockland Standard Gear Tranzilla six-speed with a McLeod clutch. Out back there’s a 9-inch rear with 4.11 gears and a Strange aluminum centersection with a Eaton Truetrac posi.

The Camaro rolls on Pro Wheels Jet 5s with 18x7 front and 20x12 rear wheels. Slowing this wild ride down is left to a six-piston Wilwood system with 13-inch rotors and a master cylinder cleverly hidden under the dash.

A carpenter and joiner by trade, you have to be impressed with Steve’s apparent skill with the welder, performing all the fabrication work himself with the help of good mate “Little Steve.” This includes the extension of the sill panels, one-piece front end conversion and the way the quarter-panels wrap under the car. Due to the channeling of the body, other elements had to be altered, like the radiator support, which Steve fabricated himself by first creating templates with wood.

Once Steve had all the bodywork complete, Creative Body Works took over, getting everything flawlessly smooth before laying coat after coat of a custom House of Kolor hue that looks straight black except when under full sun conditions. Look closely and you’ll even see a factory-style stripe ghosted under the paint along the flanks.

A similar transformation took place inside the Camaro, with nothing left of the original interior. Steve fabbed up a custom steel center console that stretches through to the rear twin-bucket seating and the custom fiberglass dash sweeps into the door trims and around into the package tray. The seats are heavily modified from Mitsubishi and BMW, although they look nothing like how they started. All the vehicle’s wiring is hidden under the trunk floor and assembled like some insane electrical work of art. Note the lack of any catch or locking mechanism. Steve hated the visual mess, so fit out both the trunk and hood with electrical mechanisms to open and close them.

Weaving throughout this is a sumptuous leather trim that covers both pairs of bucket seats and door panels as well as the billet steering wheel, kick panels, and custom digital switch panel. This is completed by tan Mercedes carpet on the false floor panels and a suite of Speed Hut instruments.

With the build now finished for a while, Steve’s already onto his next project, a 1950s FC Holden. With the original Shafiroff 540ci big-block still lurking under the bench, we’re left wondering if Steve will try and find a way to shoehorn the big V-8 into the FC’s tiny engine bay or if it’ll end up in the Camaro after all.