It’s Not Every Day You See a Channeled 1967 Chevelle

Ken Mack took the long way around the barn to make his 1967 Chevelle look the way the factory intended. And we couldn’t love it any more than we do. 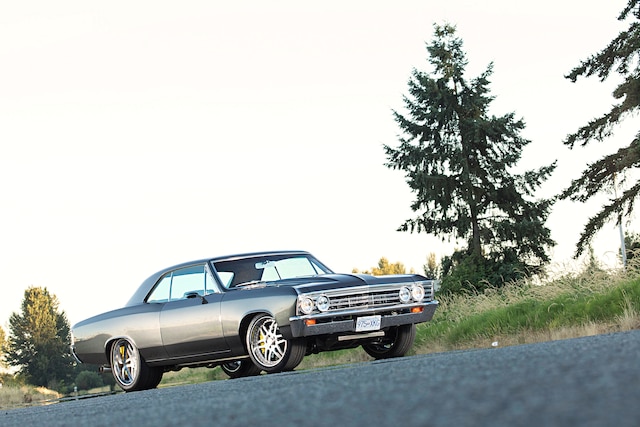 At first glance (or even at a second, third, or fourth) you’d probably never guess that Ken Mack channeled his 1967 Chevelle 2 1/2 inches. As modifications go, channeling is pretty radical. For those of you not familiar with the term, it refers to lowering the body relative to the frame, an act that requires cutting out the entire floor and raising it.

Now, we know what you’re thinking: “Wait, that thing isn’t all that low.” And you’re right; it isn’t. No, Ken and his brother Mike didn’t go through this extra work for stance. They did it to make it appear stock. Or more specifically, the way it should’ve appeared when stock.

You see, there’s a problem with A-body cars: the chassis hangs below the rockers. It’s not by much and most will never notice it, and the rest don’t even care. But it bugged Ken. In fact, it bugged him so bad that he took a car to task that had floors so pristine that he could’ve built a show car without so much as patching a single hole. But the brothers Mack fabricated all-new floors to make the most of the compromised interior space. They even raised the trunk floor 3 inches just so the fuel tank would disappear behind the bumper. Don’t let this car’s straightforward looks fool you; this is no ordinary build.

Nor does it sit on an ordinary frame. Ken made the job all the more dramatic by channeling the car over a Roadster Shop chassis. And you could make the case that a MagnaCharger-blown LS3 backed by a T-56 isn’t exactly conventional, either.

Ken did make some other changes for stylistic reasons. Like he shaved the door handles and driprails. The interior’s pretty radical, too. Ken fabricated the dash from scratch and Mike built the bezels and shift lever. The back seats were handmade in the likeness of the Recaro buckets up front.

That Ken Mack channeled his car isn’t the point. To us, anyway, it’s what that channeling represents—a whole bunch of work invested in something to achieve an ideal that most people will never notice. Most people don’t have the work ethic to do that, much less the balls. If they go to all that work, they’ll make damn well sure that everyone notices it. But not Ken. I mean, he painted his car one of the most benign colors in the palette.

But here’s the irony: Ken Mack’s sublimely understated car stands out among a sea of radical departures. While almost every other car in the row at the car show beckons your attention, this Chevelle merely invites you in for a closer look. You know, if you have a minute to spare. Give it that chance and it reveals itself layer by layer. The car isn’t incredible for a home-build; it’s incredible, period. Any shop I know would brag about building a car of this caliber.

Now here’s the icing on this grown-up way of baking a cake: you’d never know that Ken finished this car more than half a dozen years ago. And in an industry where many cars look dated before the paint even dries, that means something. In fact, I’d like to call it … radical. CHP