A bold ’66 Nova takes over his garage, and he can’t be happier 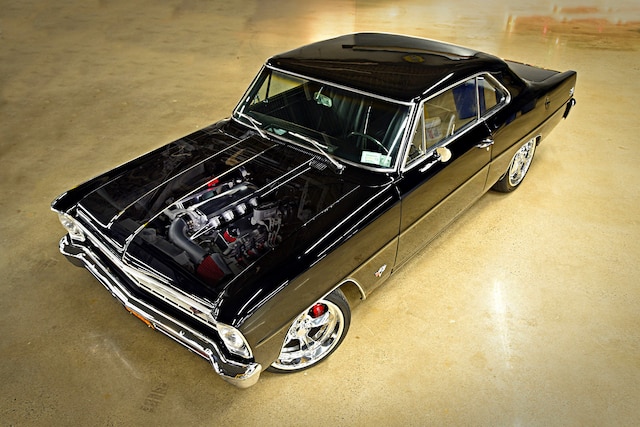 Hot rod fanatic and GM connoisseur Richard Rossi knew it was time for a change. He had owned a classic ’56 Oldsmobile for some time, but their on again/off again relationship was starting to get stale. He longed for more power, more spice, and more of everything a “horsepower lover” would consider nice. So he decided to put his beloved Pro Touring Olds up for sale and started to think about what would fill the soon to be vacant spot in his garage.

First off, Richard contacted good friend Nelson Rosado of NR Hotrods and asked if he could help him locate his next project ride. NR had previously built several cars for Richard, including that sweet Olds, so Nelson was game to see what the hot rodder ultimately wanted next. Rich had thought about building a hot Nova for some time, and well, it seemed finally that time had come. With Nelson’s help they started an all-out pursuit in the immediate area. Luckily, they located a quality contender only a few miles from Richard’s home in West Nyack, New York.

The twosome took the time to go check out this particular ’66. It was a black/black car, built up nicely, but without a complete powertrain. The car was in very good shape, with fresh black paint and small-block power. The guys thought it would be a perfect candidate for a wild Pro Touring build. A deal was struck and the Nova was sent straight over to NR Hotrods for its transformation; going from docile box to killer LS swap in one fell swoop. Let the transformation begin!

Mod Rod
First off, the car was inspected and thoroughly checked over. The car had been in the process of metamorphosing into one interesting ride. It had new floors, cowl hood, front fenders, doorskins, quarters, bumpers, and grille courtesy of the previous owner. The PPG Black paintjob was in good enough shape to save, so the guys figured just a good buff out and detail would be all that this particular Nova needed on the exterior. The car had also been built-up with a Chris Alston Chassisworks front end kit, so it had good bones to work with.

Once in the shop, Nelson pulled the engine and set it aside. Next, he dialed up BluePrint Engines out of Kearney, Nebraska, and ordered one of their LS 427 crate engines for the Nova. This particular LS7 stroker pushed 625 hp right out of the box, which the fellas thought would be plenty of power to start with. The healthy small-block features a six-bolt main OEM block, forged crank, hydraulic roller cam, BluePrint 72cc aluminum heads, and 11:1 compression.

The mighty mill is topped with an LS3 aluminum intake, 90mm DBW throttle body, 42-lb/hr injectors, and a return-less fuel rail to aid with the power upgrade. To finish off the mill, Nelson fabricated a set of custom valve covers to resemble a set of vintage Chevy big-block covers. This gave the potent powerplant the old-school look Rich was after. Some extra modifications were to redesign the GM alternator bracket so the piece would sit low in the engine bay and to restructure the accessory drive system as well. Tanks Inc., supplied the 16-gallon fuel tank and Nelson fabricated the fuel lines to work with the injection.

Next up, a TREMEC T-56 six-speed was ordered from American Powertrain to shift this ride through the gears. A custom transmission crossmember was designed and fabbed up to fit the trans as snug as a bug, without the rug. The floor was modified to fit the shifter properly so the handle would meld into Rich’s waiting hand. A hydraulic clutch system was then built by Nelson and installed as well. To get rid of the spent gasses, a set of Sanderson LS headers were fabbed in and fit between the framerails to perfection.

The chassis buildup started with a set of Global West frame connectors, tied into the rear framerails to stiffen up the ride. Up front, a manual rack-and-pinion was added along with a set of adjustable coilovers to even out the car’s street performance. Out back, a full Detroit Speed QUADRALink was installed along with a 4 1/2-inch mini-tub kit so that there would be some room for the tires out back. A Ford 9-inch with a Strange centersection stuffed with 4.10 gears puts the power out to the 325/30R19 Hankook tires at the rear corners. They are wrapped around a pair of 19x12 Schott Challenger wheels. Up front, 18x7 Challengers are shod in 215/40R18 Hankook rubbers.

The interior has several custom touches as well. Nelson fabricated a custom aluminum dash and stuffed it with a set of AutoMeter gauges to keep track of the vitals. The seats and door panels were redone in stock SS-style vinyl upholstery, and a new rug and custom package tray were added to the flavor of this burly Box. To keep the climate just right, a Vintage Air system was added to the mix. An ididit column handles the steering duties and the Chevy was rewired using a Painless harness.

Other features include Wilwood brakes all around: 13-inch rotors with six-piston calipers up front and a 13-inch, four-piston setup out back. The all steel cowl-induction hood is held tight by Ringbrothers hood hinges. A Ron Davis cooling system with dual fans keeps this car running cool even on the hottest New York summer days. The exhaust is a 2 1/2-inch stainless steel system built with Pypes mufflers, and finished off with 2017 Roush Ford exhaust tips for a different look.

Mod Look to the Future
Nelson is proud of what he built, and Richard, well, he’s even prouder to own this wild Box machine. “It truly runs and handles like a new Z06 Corvette,” says Nelson. Richard loves the car throughout, but he really appreciates the stance of his hot Nova. “It’s got an aggressive look, especially from the rear, and it handles great. The six-speed transmission shifts perfectly as well,” says the owner.

Richard would like to thank Chevy for building such a fine machine to start with, and of course special thanks go out to Nelson and NR Hotrods for designing and executing such an outstanding ride. “He would always go the extra mile to get it right, and it looks and drives exactly the way I had envisioned,” states Richard proudly. Future plans might include power steering; however, for the time being, “I’m just going to enjoy my ride”!