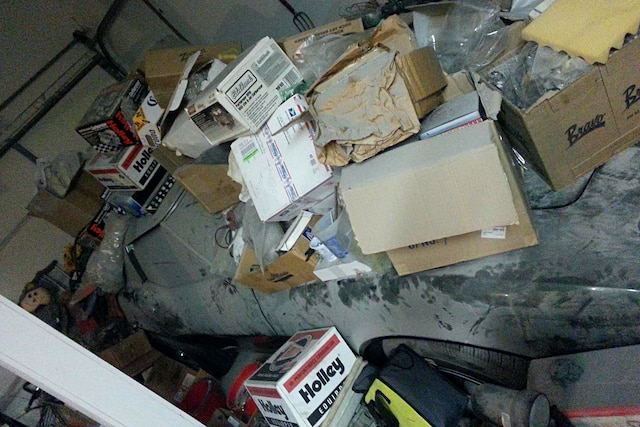 “This one was a fluke,” Bob Raimondi says because he didn’t even have to hunt these big-block Corvettes. “A friend called and said, ‘Hey, Dan is looking to unload his two Corvettes.’”

Health issues forced the sale of his 1972 and 1974 models. Raimondi collects Corvettes so he got the call. He knew Dan well because Dan was a friend of his best friend in high school.

Here’s the funny thing, the 1972 was a dead ringer to the 1972 Bob already had in his garage, “other than mine is a convertible with a hardtop and his was a T-top, but same color [Ontario Orange], same options, same interiors, everything. They are absolutely identical.”

Dan kept the miles low, maybe driving them a couple of times after parking them in his garage. A check of the license plates revealed registration tags for one in the late 1990s and other around 2000, Bob recalled.

When Bob went to see the pair of big-block Corvettes, he couldn’t be certain of the color of the 1974 due to debris and dust.

The 1974 Corvette has its original Dark Green paint.

Bob managed to get inside the 1972, and the pristine leather interior “still smelled new.” The pleasant surprise was the odometer reading 22,900.

He popped the hood to see a 454 with no air conditioning, but the complete smog system, looking like nobody has ever touched the engine compartment.

Bob crawled under the back end of the 1972 Corvette to find original mufflers. The entire car appeared 100 percent original.

There was one big-block in 1972: the LS5. With a production run of 3,913, these cars are not exactly plentiful, plus the low miles and originality made this car, a T-top, extremely desirable.

The color of the 1974 was not for certain, even after removing debris. Blowing the dust away revealed Dark Green.

The 1972 has its original Ontario Orange paint.

Bob wanted to buy the 1972, but did not have space to store both cars, even after adding a garage and hoists to expand his space, so he called his brother who was looking for a project car.

Bob’s brother, Jim, wanted the 1974, so the brothers made an offer for both cars, and with the deal would clean the garage. Dan accepted.

Apparently, Dan “was very big into low-mileage cars,” and had “hunted down these two Corvettes. The 1972 came from Maine and the 1974 from Michigan.

The LS5 in the 1972 has the original smog system intact.

Dan had a business rebuilding carburetors and somehow cleaning fluid had sprayed on both the cars and they had spots in the paint.

“My brother was able to sand his out, and then rebuff it and give it a real light layer of clear. It came out gorgeous.”

The black interior on the 1974 also smells like new leather, despite the presence of some surface mildew, which came out clean and beautiful with a shampoo.

Dan had “done a little work on the carburetor,” which was stored in a box. The exhaust manifolds were also off, but factory original and came with the car.

Bob has been so busy with his regular business, the 1972 is parked on a hoist in his garage for now. He hasn’t decided whether to clean it up and/or restore, but he and his wife are excited to have a set of twins, or “his/hers” Ontario Orange, big-block 1972 Corvettes. Vette

The interior of the 1972 is saddle in leather that smelled new.

After cleaning, the LS4 in the 1974 looks new. Jim installed the carburetor and exhaust manifolds that were off the car when he bought it.

Dan blew the dust off the 1972 before loading it on the flatbed for the trip home.

Outside, the Dark Green paint showed through the buildup of dust over 20 years or so.

The Ontario Orange was visible under the dust on the 1972.