Joe Lovat Jr. Saves One Chevy Every Year. This Year, it was a SS 396 Chevelle! 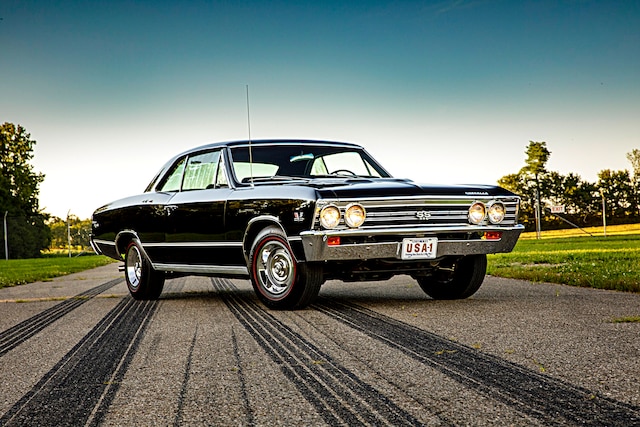 Building a hot rod is a process ripe in creative license. There’s no template, societal norm, or restriction of expression. In many ways, the process is simplified. Restorations however, do not come with such liberties. For Joe Lovat Jr., and the cars he restores, every nut and bolt, every fender washer, every subtle hose clamp must be in perfect unity with the way Chevrolet first intended them. That is no easy feat.

The 48-year-old Philadelphia resident toils in the industrial steel trade by day, but spends his nights and weekends behind the wrench, lovingly restoring classic Chevys to the tune of about one a year. The most recently finished project is the 1967 Chevelle you see before you, but a 1970 is already on the operating table for the coming year.

“There’s nothing like messing around with these cars and spending time with my mom and dad,” said Lovat Jr. “We all work together in the garage and do about one car a year. It’s a family thing.”

Camaros, other years of Chevelles, and a few other Chevys had already passed through the Lovat family garage, but this time, Lovat Jr. was after something he had a stronger connection with. “I like ’67 Chevelles. They’re my favorite year and my dad and I wanted to restore one,” said Lovat Jr. “His buddy had a car and we went to look at it. We decided to buy it even though it didn’t have a motor.”

The beginning of Lovat Jr.’s restoration process is always the same. They select one lucky Chevrolet to bring back to life, read the VIN tag, and start work sourcing parts—N.O.S and reproduction—to fill in all the missing pieces and make the car whole again. In the case of the Chevelle, the recipe called for a 396ci big-block with a Rochester carburetor and a black-on-black color scheme.

So that’s what he did. His dad (Joe Sr.) donated a spare 396ci engine that was occupying a corner of the garage and Dick Rugh’s Auto Parts & Engine Rebuilding brought it back to life.

With the car in the garage, the father/son duo began attacking it with sandpaper, shedding the bright yellow paint. The stripped-down shell went to Lenny Pasquale for body and paint work, but the frame stayed behind. It was treated to a full scrub down and repaint, along with the factory 12-bolt differential, before being mated with the pristinely painted body. Rhodericks Upholstery and Lutty’s Chevy handled upholstery duties of the completed body, and Original Parts Group, along with several other suppliers, helped fill in all of the odds and ends to complete the Chevelle. “When you try to make it all original, it can be difficult,” said Lovat Jr. “But there are so many new parts available now, that helps.”

The engine was lowered into the car and mated with an M22 Rock Crusher transmission that Lovat Sr. had laying around. While the M22 wouldn’t have been standard fare when the Chevelle was built—being reserved for only the highest power Chevys of the era—it was too cool to pass up, so in it went.

The family worked together to complete the car, with Lovat Jr.’s mom, Patty, and Lovat Sr. all chipping in. “My dad adjusted the clutch linkage and did all of the tuning of the engine,” said Lovat Jr. “I put all of the chrome back on and was really worried about scratching the paint! Every weekend we worked on the car, and we had some problems, but we figured them out. The best feeling was when we started the car for the first time and took it for a drive.”

Now that the car is finished––and a looker––it gets driven around town every once in a while and has seen its fair share of car shows, where it certainly gets noticed. “We’ve taken the car to a few Super Chevy shows and a few other car shows. It’s won some awards, including the NPD Best Restored award at the National Trail Super Chevy show, an award from Original Parts Group, and the 1967 Chevelle of the Year award.

Wherever the ’67 goes necks crane and eyes follow. The subtle good looks and shapely lines of the 1967 model year are hard to beat, and the original wheels with BFGoodrich F70-14 rubber evoke memories of a simpler time. “I like the car to feel original, I guess,” said Lovat Jr. “Like, I’m back in the ’60s.”