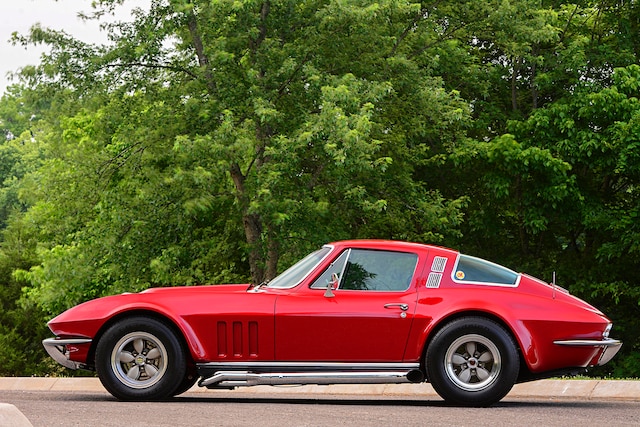 If you were around during the 1970s, then you remember some of the wild Corvette creations that roamed the streets. Fender flares were common, and just about every modified Corvette had an extra pair of taillights along with side pipes, fat tires and a wild paintjob. And while these features were all the rage at the time, they might not seem tasteful to the modern-day Corvette enthusiast.

Enter Gary Watson, and his vision of the perfect Corvette that blends the coolness of the 1970s and the timeless style of a C2 coupe, with some modern go-fast goodies thrown in for good measure. Gary experienced those wild days firsthand, and he wanted to build a tribute car, but he didn’t want a thrown-together street beast like the ones that terrorized his hometown of Knoxville, Tennessee, back in the day. He wanted to build it with precision and great attention to detail, and the car that you’re viewing is the fruit of a two-year restoration.

While the vision and details were Gary’s responsibility, he relied on Ronnie Ailor at Ronnie’s Car Shop in Luttrell, Tennessee, for the majority of the work. The frame-off restoration kicked off in March 2014, starting with an already modified 1965 Corvette coupe. The car had a one-piece tilt front end, with stationary headlights in the grille, a common modification in the 1970s that left many cars with poor panel fitment and, depending on the severity of the fabrication, a host of other issues. To hear Gary tell the story, this one was pretty bad, but he knew the car had potential to be something special. He was right.

The body was one of the biggest areas of focus during the restoration, as it required a lot of attention. Ronnie’s Car Shop handled the task of hand-fitting each panel and perfecting the look of the 1970’s Ecklers fender flares. Gary and Ronnie considered a couple different hood options, ultimately landing on the L88-style hood, which fit the road race-style flares perfectly. After fitting the panels and hand-filing the gaps to perfection, Ronnie went through a few cycles of primer and block-sanding to straighten the body. Gary’s nephew Billy Watson laid down the RM paint, which is a two-stage Barcelona Red Pearl, coated with Diamont clearcoat. The brilliant color accentuates the curvy Corvette body, and Ronnie’s Car Shop perfected the finish with countless hours of sanding, buffing and polishing.

Underneath the body is a freshly restored chassis. The frame itself remained stock, but Gary wanted to upgrade the suspension with new springs—including a fiberglass rear spring—and Bilstein shocks. He also installed offset rear trailing arms in order to fit larger wheels and tires, which is another key ingredient to his 1970’s vision. The car rolls on a set of American Racing 200S wheels, measuring 15x8.5 up front and 15x10 out back. BFGoodrich Radial T/A rubber, sized at 255/60R15 and 275/60R15, offer the right amount of stagger to fill the wheelwells and the smooth black sidewalls call attention to the beautifully restored “Daisy” wheels. Behind the spokes are slotted and drilled brake rotors with original-style calipers.

Horsepower comes from a well-dressed big-block Chevy. It’s a 502ci crate engine from Chevrolet Performance. The cast-iron block features a forged steel crankshaft with 4.000 inches of stroke. Forged pistons ride inside the 4.470-inch bore and offer a conservative 8.75:1 compression ratio. The crate engine has a hydraulic roller camshaft, coming in at 211 degrees of duration on the intake side and 230 degrees on the exhaust, measured at 0.050-inch lift. Maximum valve lift is 0.510-inch intake and 0.540-inch exhaust. Rectangular port cylinder heads process the fuel and air mixture created by a Holley 750-cfm double-pumper carburetor and GM L88 aluminum intake manifold. An original distributor, upgraded with a PerTronix electronic module, controls the ignition, while MSD 8mm plug wires deliver the spark. Hooker Super Comp headers and side pipes send the spent gasses out of the engine in perfect 1970’s style. Engine bay upgrades include a serpentine pulley system and a Griffin aluminum radiator with electric fan. Behind the 502ci big-block Chevy is a Muncie M21 four-speed manual transmission. The close-ratio gearset works well with the mild-mannered big-block and 3.40:1 rearend ratio. Gary added a Lakewood blowproof bellhousing and a heavy-duty Weber clutch for safety and durability. He selects gears with a classic Hurst shifter.

An open door reveals a stock-style interior covered in black leather. He upgraded to 1967 Corvette headrest seats, in order to take advantage of the shoulder harnesses. Eddie McMillan installed the seat covers, while Ronnie’s Car Shop and Gary Watson performed the rest of the interior assembly. The finishing touch is a 1970 Corvette steering wheel.

After two years of restoration, and a bit of tweaking here and there, Gary’s 1965 Corvette is ready for action. Gary has entered the car in several shows, including the Corvette Expo, where it was well received by Corvette enthusiasts, young and old. Gary’s creation captured our attention at first glance and has kept it ever since. The nostalgic appearance takes you back to a simpler time, while the modern performance parts help Gary and Debby get down the road safely and dependably. It’s a perfect collaboration of old and new, and even though it usually stays pretty close to home in Knoxville, Tennessee, we’re glad to share Gary’s 1970’s-inspired vision with Corvette owners around the world. Vette