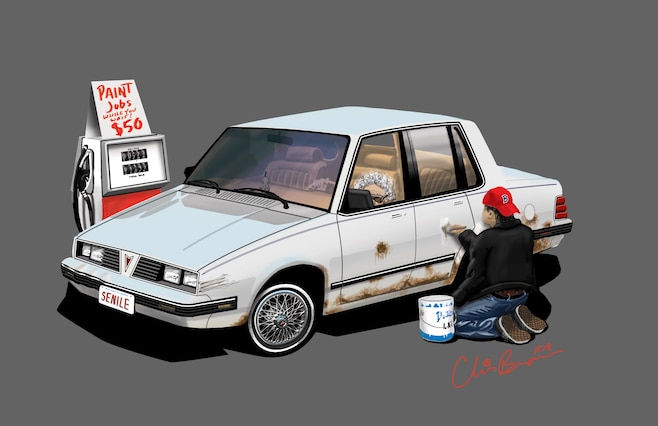 As we go through life, we receive advice from our elders. Loads of that advice is good, while some of it is suspect. I think we can all agree that there are a handful of people in our lives that have delivered advice either by words or example, which have helped to form us into the people that we are and that we eventually became. The more colorful the character, the more colorful the advice it seems, but at the end of the day we all need some help along the way and advice—whether solicited or not—is normally how we get it.

For me, the undisputed kings of advice during high school were the Fernandez brothers, who owned the gas station I worked at, my grandfather Warren Lohnes, my dad, and various coaches I had in sporting ventures that I was generally just barely good enough at to make the varsity team.

I was a 5-foot 10-inch, 200-pound kid my senior year that threw shot put and discus on the track team. I was OK at it, a midpack finisher at most meets, definitely not a guy who was ever going to be tapped for the Olympic trials. At the start of the season, the coach demanded that all the throwers had to do a running event on the team (it was a small school and a smaller track team). I got forcibly assigned to the two-mile run. For those unfamiliar, this is an event populated by gazelle-like humans who glide at a full sprint for the whole race. Dudes built like a stump need not apply. At practice, at meets—and worst of all—in front of the girls’ track team, I would get stomped. Usually lapped by the 6-foot 5-inch guys who made a lap in what seemed like 12 steps. I’d always be down on myself, especially when I hung my head in front of my teammates on the final “lap of shame” if I was the last dude in. A guy named Steve was the coach of the team and a couple meets in I was trying to beg my way out of the race by any means possible. He wasn’t hearin’ any of it. Finally, he squared me up, looked me in the eye, and said, “You are running this race for you. That’s what you’ll do your whole life. Go run the race for you.”

I still got donkey stomped at every meet, but by the end of the season I was able to whittle my time down to almost exactly 12 minutes. Again, maybe not something to even admit publicly, but to push myself and achieve that time was its own award. I was in the best shape I’d ever be in and the shame had disappeared as I had turned the whole thing into an exercise against my own goals. A decade later I would be starting a website that no one read a word of (BangShift.com) and I was cranking out copy every night. It was the same deal, except for the fact that there were no girls to laugh at me (OK, my wife took pity on me) but Steve’s advice worked then, too. I kept writing and we ended up with a successful business.

And now about the Fernandez brothers. John was the upstanding citizen and the owner of the Shell station I worked at. Manny was an awesome mechanic who had spent a decently long stint in the cooler for, ummm … pharmaceuticals. Manny fixed anything and everything that came in. He had a Winston permanently lodged in the space left by his missing front tooth. He was not an advice giver. John was that guy.

One day an old lady pulled in with a Pontiac 6000 full of rust holes. This was a white car and it was the ugliest thing you’d ever seen. I went out to pump her gas and check her oil. Then the question came. I had been painting the station curbs white, as we did every spring, and she asked if I could paint her car with the curb paint. I (as a mostly upstanding 18-year-old) explained that it was latex house paint and unsuitable for automotive use. Just then the old man came hauling tail out of the station. He had heard the whole business and told her that for $50 I’d rough up the rust spots with sandpaper and slap paint on them.

So, after a couple of hours I had hit those blow holes with 80-grit and Huck Finn’d white latex house paint on them. She was happy as a clam and left with a smile on her face. I was horrified and really confused. Why had John made me do this? He provided an answer when he saw me that afternoon on the way to his truck. “Kid, if you never learn another thing from me learn this,” he said. Wide-eyed I listened. “When someone is trying to give you money, you BLEEPING well figure out how to take it. She left here happy and she’ll buy her gas here until she cannot drive anymore because of this.”

Bizarrely, he was right. Every time I saw her she thanked me again and again and again for what I thought was the world’s most horrid paintjob. John’s advice has never fully escaped my brain because as someone in business for themselves in a couple of arenas it is really true and really hard. Taking the $50 was the easy part, keeping the old lady happy was eventually the hard part.

To me, advice is invaluable. I want to know what people have learned from triumphs and failures. We all have our own, but mankind usually learns what doesn’t work long before we lean what does. Thanks, old guys. Keep it coming.

About the Author: Brian Lohnes is an NHRA National Event Staff Announcer, host of MotorTrend’s Put Up or Shut Up, and co-owner of BangShift.com.