1964 Corvette Convertible makes the transition from driver to showstopper 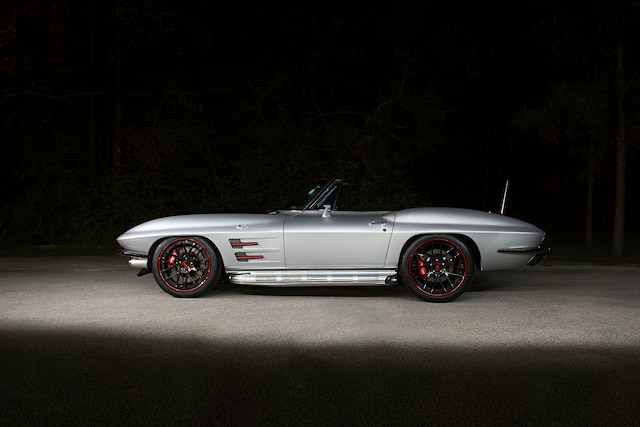 Modifying a classic car is a slippery slope—take one step down that path and off you go. Good luck climbing back up and finding contentment with the simplicity of what once was. That’s not to say changing things up on you’re ol’ Corvette is a bad road to drive down, it’s simply worth noting that once you start, it’s almost impossible to stop.

May we introduce you to Eddie Harvey of Livingston, Texas and his 1964 Corvette convertible? It all started when Harvey was cruising down the road in his beloved Corvette and a deer jumped out in front of him. In an attempt to save himself, the car and the deer, he ended up putting the ‘64 in a ditch. Initially, Harvey was just going to have the car repaired and retain its stock configuration, but then a few things ended up getting tweaked. He sent the Corvette over to Damon Roberts at DZ Motorsports across town in Livingston, Texas to help fix it back up. After a few talks though, they ended up deciding to modernize the Corvette’s powerplant and drop in an LS3 crate engine. DZ Motorsports also upgraded the rearend with a C4 Corvette-style independent rear including a Dana 44 with 3.42 gears and a limited slip. But that was all, just enough modifications to make it a little better driver than it was previously.

Not long after the Corvette got back on the road, Harvey decided he liked the changes and wanted more. “We started showing it at small shows and ended up loving it,” said Harvey, “So [I] asked Damon from DZ Motorsports if we could change it any to compete at the big shows. He grinned and replied with, ‘I was hoping you’d say that.’” From then, the build took about two years to complete. Since the Corvette had just undergone a minor restoration, Roberts had the unique task of modifying the car in a way that didn’t require them to start from scratch. It was all about adding custom touches to take the Corvette to the next level.

Starting under the hood, Roberts fabricated numerous custom panels to clean up the look of the engine bay and style up the otherwise stock LS3. The stars of the show are the Eddie Motorsports Serpentine Pulley System and Speedmasters Downdraft Intake around which the rest of the engine bay was designed. Roberts then made a carbon fiber radiator cover for the Champion four-row aluminum radiator and fuel rail covers for the Speedmaster fuel injection. Finally, custom panels were fabricated for the firewall and over each wheel tub, all of which is completely removable. Oh, and who can forget the linear actuated hood which allows Harvey to open the hood without even touching it.

While we are on the subject of the engine bay, it’s worth noting that although looks have taken priority with this build, that little LS3 still makes a respectable 527 horsepower and 468 lb-ft of torque. Behind the LS, Roberts installed a six-speed automatic 6L80E transmission to make sure all that power would be applied with ease and reliability. The final piece of the drivetrain is that Dana 44 we mentioned earlier that Damon installed in part one of the Corvette’s restoration.

To go along with the modern drivetrain, Roberts completely overhauled the suspension front and rear. Global West tubular control arms were installed up front and Viking coilovers went in at all four corners. In the rear, the Corvette was completely back-halved with custom tubular frame rails the wheel tubs widened. Completing the modern power and handling package are a set of six-piston Wilwood disk brakes clamping down on 14-inch rotors front and rear.

Now to get into the stuff that really makes the car standout: the exterior and interior. The ’64 convertible was sprayed by Roberts in Starry Night Silver from Akzo Nobel paint. The stock 1964 hood was replaced by a big-block style stinger hood with the raised portion painted black with red pin-striping. Then Roberts designed custom carbon fiber bumpers for both ends of the Corvette along with a more modern-looking grill. Then there are the infamous side pipes. Custom stainless headers exit into the 3-inch pipes with Borla tube mufflers concealed by gorgeous custom heat shielding. Other exterior details included custom 3D-printed sideview mirrors, side vent covers and even taillights. Last but certainly not least are the wheels and tires chosen for the Corvette. Harvey decided to go all out here and had Roberts order up a set of Strasse SM7 carbon fiber wheels. The fronts measure 19X10 and are wrapped in 275/35ZR19 Michelin Pilot Super Sports while the rears are 20X12s with 335/30ZR20 Michelins.

Being that this Corvette is a convertible, the interior is practically as noticeable—and thus important—as the exterior of the vehicle. To start things off, Roberts installed Procar 1000 Series seats covered in Bloodhound Red leather from Relicate. The rest of the interior; including the center console, dash and door panels; were also covered in the same Bloodhound Red leather. Within the dash, the stock gauges were removed and replaced by Dakota Digital VHX units while the stock shifter was swapped out for one from a fifth-gen Camaro. Just behind the shifter is an iPad Mini integrated into the center instrument panel that controls upgraded speakers from Infinity boosted by a Planet Audio amplifier. Then, adding to the modern tech, Roberts worked in a complete climate control system from Vintage Air along with some fancy ambient lighting around the interior. A Billet Specialties steering wheel wrapped in matching Relicate leather would be the final touch.

“There isn’t much of the car now that isn’t hand-build,” Harvey told us, and the more you look at it the more you realize how true that is. So after a lengthy build process, he finally ended up with a Corvette he can be proud of—at least until that itch comes back and Harvey comes up with a new plan to take his 1964 Corvette one step further. Vette