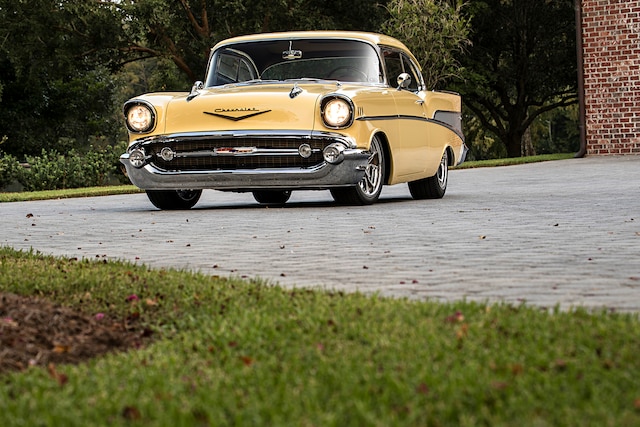 All right, who’s the genius that thought yellow paint and brown wheels was a good combination? Colors like Hugger Orange and LeMans Blue are legendary for all the right reasons. Butternut Yellow? Not so much. “You don’t run to it or run away from it,” car owner Sonny Freeman laughs, “but the color has been a big part of the fun we have with the car.” Regardless of how much you hate yellow, once you give the Tri-Five’s mean stance, clean lines, and understated elegance a good once-over, it’s hard not to like it. After the supercharged LS7 fires up and barks out the MagnaFlow pipes, you’re suddenly in love with a car you thought you’d hate. And that bit of trickery, friends, is rather genius.

Like the short guy at the party that wows the ladies with his electric personality or—more likely—a big bank account, Sonny’s ’57 Chevy slowly wins people over right up to the point when they realize they’re head-over-heels in love. “When people think of yellow cars, they usually imagine a high-impact yellow or baby-poop yellow,” Sonny jokes. “In all the events we’ve been going to the last seven or eight years, I noticed that over half the Tri-Fives out there are black or red. I just wanted to do something different. Axalta worked closely with us for the color selection. They call it ‘Butter Yellow,’ which is very close to the original Chevy color.”

For Sonny, building the ultimate Pro Touring ’57 Chevy marks a journey that started as a teenager. After many years lusting over Corvettes as a kid—then building many high-profile C1 and mid-year Vettes as he became more established in his career—Sonny felt like it was finally time to come full-circle and start another Tri-Five project. “Corvettes are what really got me into cars. I’ve always been a big Western fan, and I loved watching Bonanza back in the early ’60s,” Sonny reminisces. “During the first episode each season, they cut the show short five minutes to show all the new Chevy models that were coming out the next year. The last car they showed was a Corvette, and I knew right then that I had to have one. When I was 8 years old, I saw my first Corvette in real life. It was a white 1954 C1. My first thought was ‘Wow, that’s a real Corvette.’ My second thought was ‘Wow, that guy must have a lot of money.’”

Once Sonny turned 16, he realized that his dream of owning a Corvette would have to wait. “I knew that I couldn’t afford a Corvette so I got a 1957 Bel Air. I thought that if I couldn’t own a 1957 Chevy, the Lord was going to come down and take me,” Sonny laughs. “I put a solid-lifter motor and two four-barrels on it, then drag raced it in C/Modified Production. Every time I had an eye for a new car, I had to sell what I had to get it. I put the ’57 back to stock to sell it, and as soon as I fired it back up my uncle came by that night. We decided to take it on a drive, ended up getting into a race with a GTO and blew the motor! We had to run down to the junkyard to buy a new motor. It’s amazing how when you get the car bug, it’s a life-changing experience.”

Like most hot rodders, Sonny took a step back from the hobby as he immersed himself in raising a family and building a successful business. After selling his company and retiring, he satisfied his Corvette fix by building several award-winning C1s and C2s. Through it all, however, he felt a burning desire to revisit the other love of his youth by building the ultimate 1957 Chevy. “I wanted to build a Tri-Five the way I would have built my first car if I had the ability and the money. I wanted to build it the way Chevrolet would have built it back in 1957 if they had today’s technology,” Sonny explains.

Finding a suitable project car with a clean, original body and chrome proved difficult. As the search endured for several years, Sonny considered starting off with an aftermarket body. Fortunately, he found the perfect candidate in Clinton, Mississippi. “The metal was in phenomenal shape. The owner kept this car his entire life,” Sonny recounts. “All the metal was still original. Even the floors were good. The only reason we replaced them is because they were getting thin in some areas.”

Although Sonny took pride in his hands-on approach to building cars in his youth, he realized that the hobby has changed quite a bit in the last 50 years. “Having built these cars myself in the past, you gain an appreciation for all the hard work that goes into these projects. To get the ’57 to the level I wanted, I realized that I needed the help of a professional builder since they have tremendous talent in areas you never thought of to turn a drawing into reality,” says Sonny. “I researched a lot of builders and ended up taking the car to Mike Goldman Customs. I could not be more appreciative of the Goldman’s approach to building cars. It’s been a fun process. The idea was to modernize the car without butchering it, and enhancing its nostalgic value.”

With many, many memories of what it was like driving his first ’57 at speed, Sonny knew exactly what he wanted the second time around. “Once you hit 100 mph with the big, flat front end on these cars, the wind moves them around quite a bit and it does the hoochie coochie on you. The car floats around, and it’s like riding on an airbag,” Sonny recollects. “When you’re young and stupid that’s OK and kind of fun, but when you’re older and wiser you realize you were right on the edge. We put an Art Morrison chassis under this car so it drives and handles great, and doesn’t float around.”

Ride and handling alone do not make an all-around hot rod, so Sonny ordered up a supercharged LS7 small-block from Mast Motorsports. Featuring a forged 427ci short-block, Black Label 280cc cylinder heads, and a 2.9L Whipple huffer, it directs 800 horsepower to a Bowler T-56 six-speed manual transmission and a Ford 9-inch rearend. Ultimate Headers long-tube headers—jewelry in their own right—send exhaust pulses to dual MagnaFlow 3-inch mufflers. Managing the fuel and spark is a Holley Dominator EFI system. “With EFI, you can let the car sit for four months and it fires right up. You’re not sitting in the car with a cramped right leg,” Sonny laughs.

Just as interesting as the car’s yellow exterior is the brown upholstery lining the cabin. Sonny admits that it took some convincing. “I thought about doing a two-tone interior, but Paul Atkins thought it wouldn’t work. He said he had the perfect shade of brown that would add so much to the car,” he recalls. “I wasn’t sure about it at first, but once I saw the color in person I knew we had to go with it. Paul was 100 percent right. We ended up carrying that brown over into the wheels to tie everything together.”

Whether people care to admit it or not, the yellow and brown livery looks surprisingly good. “Most of the time, yellow is not a very popular color with cars. It took the Goldman’s six or seven months to get used to the idea of painting this car yellow,” Sonny jokes. “I call it a mellow yellow that’s kind of soothing. I’ve had people walk up to the car at shows and say they usually hate yellow cars, but admit that this one looks really good. People just embrace it and absorb it once they see it.”

So to answer the original question, Sonny Freeman is the genius that thought yellow paint and brown wheels were a good idea. Based on the way it makes people love something they thought they were going to hate, it really has proven to be a stroke of genius. CHP