Pro Touring ride in the making on Long Island 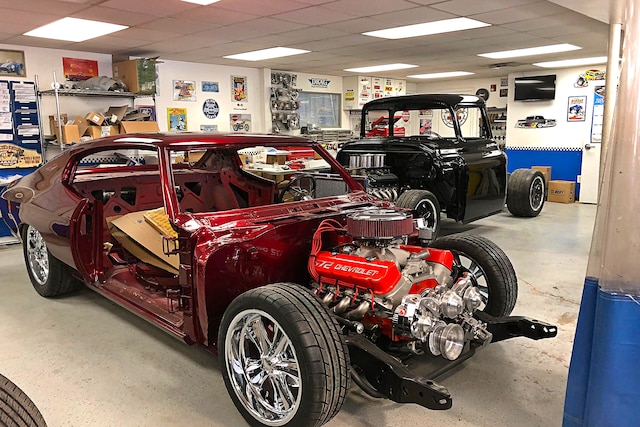 Last year, this ’72 Chevelle showed up at Anthony’s Rod & Custom in Middle Island, New York, for a complete makeover. Local Chevy owner Mike Ingoglia sent his prized A-body to the shop as a bare shell and frame, and let proprietor Anthony Luca and his crew go to town on his Bowtie.

To start this build off on the right foot, Anthony stepped back and took inventory of the project in front of him. He then decided that the best way to attack this ride was to first fit all the body panels correctly. Once the panel-puzzle was put together they then made sure that the gaps were nothing short of perfect before moving on to the next step of making the flanks pin straight. The bumpers were then shaved to perfection before being sent out for chroming.

Then the body was removed from the frame and put on a rotisserie so the crew could get at the undercarriage to make a few floor repairs. Next, the firewall was flattened, the heater box was removed, and the rear wheeltubs were massaged for more room. Kindig-It color-matched door handles were added, and the crew made them fit to perfection. The underside of the body was painted the color of choice and, once done, the body was reinstalled on the restored frame. From there, the car was prepped and its color/clear coats of DuPont Hot Hues Razzleberry Red were applied. Ghost stripes came next, and then final process of assembly.

This radical ride is powered by a 572 big-block and shifted by a 4L60E transmission. A March Performance serpentine system was installed along with 1 7/8-inch long-tube headers. An Aeromotive A1000 fuel pump feeds the hungry big-inch mill. An AirRide system will handle the suspension duties and there will be four wheel disc brakes to slow everything down. A Ford 9-inch with a Currie centersection and axles will supply the power to the back meats. Check back at Super Chevy in a few months to see the final product. You’ll be glad you did!

Reborn and Blown 1972 Chevelle from Down Under