Speed is the New Black in this 1962 Chevrolet Corvette 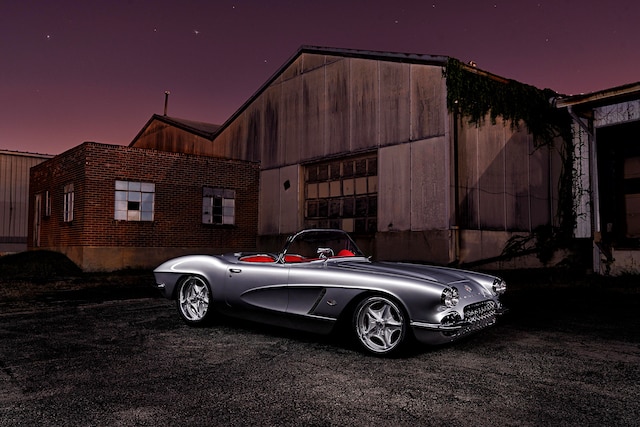 Childhood dreams are hard to purge, especially if your visions of grandeur involve a car like a Corvette. Given the multitude of examples on the road, spotting a hot Corvette is practically an everyday occurrence for most carnoisseurs; thus flaring up those pent-up desires to obtain a Chevy sports car to call your own. From vintage C1s to modern C7 street burners, it’s all the same … Corvette lust is just a hard thing to shake.

John Pantanella is one of those guys who fantasized of someday scoring a plastic Chevy to call his own. After pining for hot C1s and C2s over the years, he waited till his life settled down before getting it all together to search for the car of his dreams. Then, after test-driving a bone-stock C1 Corvette, he found the experience left a lot to be desired in his eyes. To him, that beautifully restored 1962 had sports car looks to die for but needed a dose of modern technology to drive and perform the way he wanted it to.

Now, John considers himself a pretty impulsive guy. So he thought maybe this sudden need to possess a Corvette would just pass over time. But he soon found himself constantly thinking about having that one special Corvette to occupy that empty spot in his family’s garage. Once he knew this wasn’t just a passing fancy, he decided to do something about his growing carnal cravings for his favorite Chevrolet model.

John made the decision to head over to Classic Car Studio (CCS) in St Louis, Missouri, to talk options with the team. CCS owner Noah Alexander was happy to lend an ear and listen to what John wanted in his Corvette. What John really craved was a more modern driving experience, but vintage-appearing ride. “I always admired the C1 cars. They always caught my eye,” says John. So Noah and CCS General Manager Charles Crews looked at several donor car options, finally finding one that would fit the bill. It was only 25 miles away from the shop, so the twosome went to take a quick look.

That particular 1962 they inspected was an older restoration of a base model Corvette for that year. All the parts were there and the body was in relatively good shape with no prior accident damage to speak of. They both gave the thumbs up on the Corvette, figuring it was a good candidate for John’s needs. A deal was quickly struck and the car was loaded on the shop’s flatbed. The project ’62 would soon hit the floor at CCS for its transformation into John’s vision of what a Corvette should be.

The Corvette was quickly torn down and thoroughly inspected by the crew. Like they thought, the body was in relatively good shape for its age. The main goal here was to create a restomod-styled ride, using the ’62’s body, but supplying a modern chassis to go underneath it. Once the Corvette body was separated from the frame, CCS reached out to Roadster Shop in Mundelein, Illinois, and had them put together one of their top-notch 1953-’62 Fast Track chassis for the Corvette.

The Fast Track chassis is built on 10-gauge fully boxed framerails and uses the factory body mount locations, core support and bumper mounts. As far as the suspension goes, it’s built with Z06 front spindles and uses large diameter 1 5/8-inch lower control arms and 1 1/4-inch upper control arms in its construction. To this base, CCS added RideTech adjustable coilovers, a stout Ford 9-inch with 3.73 gears and a four-link out back. For stopping power there are Wilwood disc brakes all round; six-piston caliper fronts and four-piston rears do the pinching on this wild ride.

While this was in process, the CCS boys did the needed bodywork on the shell. Since John was fond of the original look to the ’62, very few changes were made to the outer styling of this plastic Chevy. One notable change was going with an earlier ’58 issue grille, something that CCS thought would be a nice custom touch. Once the flanks were straight and smooth, the team sprayed the body in Iridium Silver BASF Glasurit paint. The modern vibrant hue looked rather killer on this vintage-styled ride.

Next up was choosing a powerplant to propel this Chevy down the open road. John wanted something powerful but practical, so CCS chose a Connect & Cruise LS3/4L65E combination to do the job. Before the install of this potent GM powerhouse, the body crew reworked the firewall to create a flowing finish and then smoothed out and color-matched the engine compartment to bring it all together. Once installed, Paul Jones consulted with Richard Waitas at MagnaFlow to help get the perfect pitch and flow to the exhaust. Once the data was gone over, Paul went ahead and built a one-off stainless system for the Corvette, featuring MagnaFlow converters and resonators and then finished it all off with a pair of Borla mufflers.

The interior/exterior color cues were very important to John, so master fabricator Scott France worked side by side with the owner, choosing the correct color scheme for the Chevy. They evaluated Relicate leather samples, picking the correct hue to get the color combo to look just right. The near stock interior was finished off in a deep Vermillion Red, covering the seats, dash and panels with the leather. Changes of choice were Dakota Digital gauges, a Billet Specialties steering wheel (also wrapped in Relicate) and a frigid Vintage Air A/C system and Billet Front Runner kit to keep the climate right where John wants it. Kicker Audio supplied the needed hardware to give the owner a dose of his favorite music while out in this classic drop-top.

When it came to the overall look of the Corvette and its attitude, Scott France at CCS stood firm and stated “stance is everything” and worked with Schott wheels to get the Corvette’s posture to score on all points. They decided on a quartet of Schott’s Velocity rims, fitting 19x8.5 fronts and 20x10 rears on John’s ride. They are shod in Pirelli P Zero tires, 235/35ZR19 front and 245/40ZR20 rear, respectively. The big meats finish the overall look that the crew at CCS was looking for.

Once the Corvette was finished, John got to see the final product at CCS. And lucky for us, the build was featured in Classic Car Studio’s hit TV show Speed is the New Black, airing on The Velocity Channel. To say John was enamored with the restomod Corvette would be an understatement. “It’s a rolling piece of art,” says John.

So what’s the future hold for John and his breathtaking ’62; lots of open road for sure. “Functionally it’s a pleasure to drive. It’s one of those cars I can just hop in and point toward the beach and go.” This CCS-built, modernized ’62 is one bold and beautiful ride, with an emphasis on stunning looks, but with driveability to match. Vette