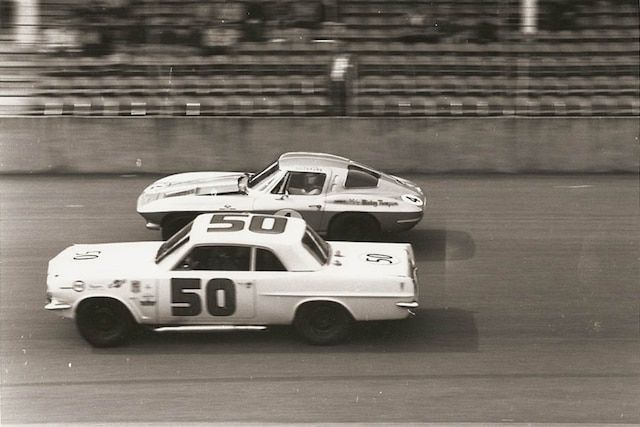 We’ve all heard the story of the little engine that could. Well, the little engine in our story isn’t so little and packs a great deal of muscle for something from the mid-’60s. How about a 421 SD Pontiac packing 500-plus hp and capable of motorvating a ’63 Tempest LeMans around Daytona quicker than the competition.

And what does this have to do with all things Corvette? Well, at a time when the all-aluminum 427 Mystery Motor was about to make its advent within a pair of Mickey Thompson 1963 Corvette Z06s here pops up this barely noticed Pontiac V-8. At a time when the Chevy 427 big-block—the first of its breed was about to punch the automotive world in the proverbial nose—there was this Pontiac to get around.

Doubly impressive is the lil’ Pontiac hustling around the track and lapping everyone, including one poor Ferrari eight times. Others were lapped multiple times, too. Even the second place finisher, one of the Mystery Motor Corvettes driven by the legendary A.J. Foyt would succumb. Instead of Chevy introducing the world to a victory with the Mystery Motor, the best they could do this day was to come in second.

In Corvette folklore, the accounts of the Chevrolet 427 Mystery Motor packed into the Mickey Thompson 1963 Corvettes that raced at the 1963 Daytona Speed Weeks is the stuff associated with legends. Normally we wouldn’t expound on the virtues of a Pontiac in a Corvette magazine, and especially its editor’s page … but I thought this is such a great story and is wrapped around the history that is all things Corvette. And this lil’ Pontiac and that big ol’ Corvette are forever linked.

Let’s start with the basics of the car that gave everyone fits. It was a 1963 Pontiac 421 (500-plus hp) Super Duty LeMans coupe (Tempest) belonging to Paul Goldsmith. It’s February 17, 1963, and Chevrolet has provided two 427 big-blocks (aka Mystery Motor) to Mickey Thompson who promptly wedges one each into a pair of 1963 Corvette Z06s. And the rest, as they say is history, as all three are off and running at the Second Continental Race a 250-miler.

Possibly the most peculiar occurrence of the weekend took place shortly after the event. The Pontiac was sent back to the shop in Indiana and sat for a short time before reportedly being purchased by Mercedes-Benz, who promptly shipped it back to Germany and completely disassembled every nut and bolt for a “competitive” inspection. The car has never been seen again and is listed by most hard-core SD experts as “destroyed.”

But what made this car so desirable, especially to Mercedes, was the rear mounted trans-axle. But it’s exactly what allowed this little Pontiac to stick in the corners and when on the straightaways the rest was easy with the 421 V-8. The transmission was another “head scratcher” as the Pontiac engineers stacked a pair of Pontiac two-speed Tempest Torque units minus the torque converter. Instead, Goldsmith used a clutch to get off the line but once underway it was a simple matter of “grunting” into the next gear … of which there were four.

The Pontiac started at the pole position and it wasn’t even close! Can you imagine a Pontiac Tempest sitting next to a styling marvel like a Ferrari GTO? Even the brutishly good looking Sting Rays of the day resting next to this Pontiac was an odd site. The Pontiac beat the A.J. Foyt-driven 427 Sting Ray by two laps, that’s five full miles … almost wonder if it was a race at all?

When the time came for the Pontiac to compete in the longer distance Continental race later that same week it wasn’t long before the lil’ Tempest gave up the ghost. Popular consensus is the 421 SD motor was fatigued from the shorter 250 race and couldn’t finish the longer, more grueling race.

Since being shipped back to Germany in 1963, the car has never been seen. Some think the car was eventually destroyed. Others believe it still lives in a corner of a research shop somewhere across the ocean.

Competition breeds excellence and I have to think that the Corvette benefitted from the lil’ upstart Pontiac … and so did Mercedes and everyone else who was watching. Vette