Where the design really came from 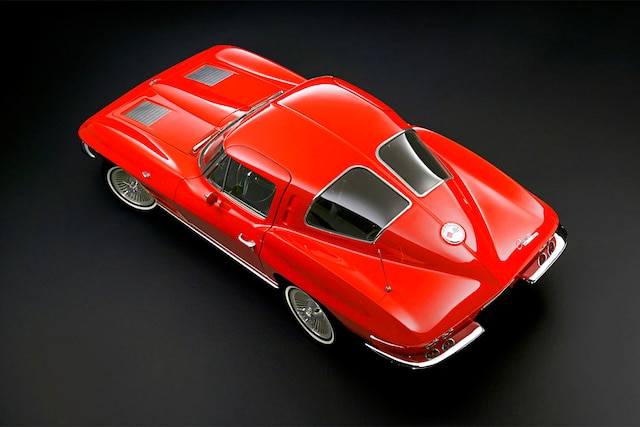 In 2015, hemmings.com posted a story about an obscure car called a 1938 Adler Trumpf Rennlimousine. Maybe 10 were built, the exact numbers are not known; and four or five raced at the 24 Hours of Le Mans in 1937, 1938 and 1939. One of the cars took a 1,500cc Class win. Today, only three are known to exist. The styling is late 1930’s German aero: rounded front; wraparound windshield and a long, tapered tail. This is a quirky-looking car ... until you get to the back of the roof. Wow! It’s a Sting Ray with a split rear window and two round taillights on each side!

The Sting Ray story is that in 1957, young GM designer Peter Brock sketched the basic design, as per Bill Mitchell’s loose direction for the next Corvette: “Mitchell’s” Corvette! Around the same time, Chevrolet general manager Ed Cole wanted all 1960 Chevrolets (Corvette included) to use a transaxle for better weight distribution and improved interior space. Brock’s design was used for the body of the Q-Corvette and included a fastback; but not what we know today as the Sting Ray. A fullsize clay model was created, but due to cost, the overall project fell apart and only the Corvair got a transaxle. Brock left the company shortly afterward.

When Mitchell acquired the mule chassis from Duntov’s Corvette SS racer, he had Larry Shinoda take Brock’s Q-Corvette shape and make a roadster body to fit the chassis. This became the Stingray Racer. When it was decided that the Stingray Racer shape would be the styling direction for the next Corvette, Mitchell gave the assignment to Shinoda. But the Stingray Racer was a roadster, and Mitchell wanted a convertible and a fixed roof coupe for the new Corvette. So how did Shinoda come up with the now-iconic Sting Ray roof? Everyone just assumed that Shinoda or Mitchell designed it, and no one ever asked.

In July 2015, I wrote a post about the Adler Trumpf Rennlimousine on my corvettereport.com blog site, as part of my “Corvette Odd-Ball” section. In September 2018, I got an email from a man in Florida named James McLynas telling me that he found my story and that back in the late 1980s he owned a 1938 Adler Trumpf Rennlimousine. I got his phone number and we had a very interesting conversation.

McLynas explained that he’s always liked unusual cars. One day in the late 1970s, in Michigan, he saw the back end of an unusual-looking car parked in an old man’s side yard shed. Thinking it was a Corvette Sting Ray, McLynas knocked on the door of the house and met the eccentric owner, Rubin Halprin. When McLynas asked about the old Sting Ray, Halprin went off on him. “Ha! That was Hitler’s car! That’s not a Sting Ray! That’s a 1938 Adler Trumpf! It was raced at Le Mans and won its class! Those bastards at Chevrolet photographed my car, stole my design (Halprin did not “design” the car) and made it into the Sting Ray!” Halprin was a serious hoarder and a real crank.

Halprin went on to explain that he bought the car for $2,000 or $3,000 from a retired Air Force officer that brought the car back from Germany in the mid-1950s. The paint was bad so Halprin gave the car a $19.95 Earl Scheib blue paintjob and used the car for years as his daily driver. One day in July 1959, Halprin took a bunch of local kids to the State Fair. While at the fair, GM Styling executive David Holls and a co-worker approached Halprin and asked if he would bring his unique car to the GM Tech Center. Thinking that GM was going to buy the car and he’d make a nice profit, Halprin had a friend follow him to the Tech Center so that he’d have a ride home.

Holls met Halprin at the tech center with a photographer to document the car. After the pictures were taken, Holls thanked Halprin and that was that. Well, Halprin is royally pissed. He cussed them out, left all steamed up, and was surly about it the rest of his life. A few years later the car was stolen then recovered with the car’s nose banged up. Eventually, the car wouldn’t run anymore so Halprin pushed it into his shed.

In 1985, McLynas happened to be in Michigan and thought he’d look for the old Adler Trumpf. Halprin still had the car, only by then the shed had fallen down and the car’s condition was even worse. McLynas has affection for unusual cars, so he worked a deal with Halprin and bought the car.

The shape of the Sting Ray’s roof and sharp creases fit perfectly with the shapes of the fender humps. The only other car to use this unique design was the 1971-’73 Buick Riviera. Illustration: K. Scott Teeters

McLynas didn’t do much with the car and eventually sold it in 1990 to the Black Hawk Collection. The new owners gave the car a total restoration with the help of a prison work program that taught auto restoration skills to inmates wanting to learn a trade. Years later, the 1938 Adler Trumpf won a class at Pebble Beach, was purchased by a private collector, taken to Austria and never seen again.

After McLynas sold the car, he heard that retired GM Design Director David Holls was to be one of the judges at a concours car show. McLynas went to the show to specifically ask Holls if the Adler Trumpf that he bought from Halprin, had been photographed at the GM Tech Center. Holls explained that he couldn’t talk then because he was judging the show, but offered to have him over to his house. Holls said, “I think I know what you want to know.”

The following week, McLynas visited Holls in his studio. After they had lunch, McLynas asked, “Did GM take the roof design from the Adler Trumpf and use it for the 1963 Sting Ray?” Holls then took out a binder and showed McLynas the photos of Halprin’s 1938 Adler Trumpf. McLynas was looking at his car; the day eccentric old Rubin Halprin took to car to the tech center thinking he was going to get a lot of money. Instead, all he got was a “thank you.”

Holls then said, “Let me answer your question.” (All the while nodding his head up and down) “This car had nothing to do with the Sting Ray.” Holls also had snap shots taken the day he saw the car at the State Fair.

What happened was this; the GM designer photographed an unusual-looking car, one of maybe 10 ever built before World War II that survived the war, eventually becoming a G.I.’s “spoil of war.” Bill Mitchell was GM’s Sr. VP of Design and racing his Stingray Racer on his own dime. But what he was really doing, besides having fun, was testing the public’s reaction to the Stingray’s unique shape. Mitchell saw the photos of the Adler Trumpf’s roof, handed the photos to Shinoda, and instructed him, “This is want I want.” Everything comes from something. The fact that the Sting Ray’s roof shape came from the Adler Trumpf Rennlimousine in no way detracts from the iconic Corvette. Mitchell had a keen eye for design and intuitively knew his Corvette had to have the Adler Trumpf Rennlimousine’s roof. Vette

The Adler Trumpf Company produced automobiles in Germany from 1932 to 1938. When this car was built in 1936-’37, it was considered advanced aerodynamic design. After World War II and by the 1950s, it was just a quirky-looking European car. Coincidently, the car’s wheelbase is 98 inches, the same as the C2 Sting Ray. Photo: www.dieselpunks.org.com

The Adler Trumpf Rennlimousine (racing sedan) was styled by airship designer, aerodynamicist Paul Jaray. The car’s basic profile shape was half of a lighter-than-air airship; rounded in the front and tapering back into flat wings on each side. The roof featured a curved windshield that wrapped around and tapered back to form a teardrop shape. This was very advanced for 1937. Photo: RM Sotheby’s

After attending the 1957 Turin Auto Show, Sr. VP of Design Bill Mitchell came home with a packet of photos of the Abarth 750 and Abarth Alfa 1000 Speed Record cars. He instructed his designers to produce sketches based on the Speed Record cars. This was one of 19-year-old Peter Brock’s sketches. Mitchell commanded, “This is what I want!” Photo: GM Archives

Working from a space buck designed by Duntov for Ed Cole’s Q-Chevrolet transaxle program, Brock and his stylist co-workers created a fullsize clay model. The final clay model had two rear window configurations, but the overall look was not yet what we know as the “Sting Ray.” Photo: GM Archives

Here are the drivers of the Adler Trumpf Rennlimousine in the 1937 24 Hours of Le Mans: Fritz “Huschke” von Hanstein (aka, “The Racing Barron”) and Anne-Cecile Rose-Itier. Anne was the ninth woman to drive in the 24 Hours of Le Mans and competed in 1934, 1935, 1937 and 1939. Fritz and Anne were black-flagged for an improper fuel stop and were a DNF. The car had a crude four-wheel independent suspension, a four-cylinder engine with 56 horsepower that was cooled by a gravity-fed oil system and front-wheel-drive.

This is another Adler Trumpf on display in Berlin. The roofline just screams “Sting Ray” and fit perfectly on Peter Brock’s design that Larry Shinoda was working on for the 1963 Sting Ray. Photo: www.flicker.com

After World War II, the surviving Adler Trumpf cars were used as daily drivers. One car was exported to America and eventually became part of Jimmy Brucker’s “Movie World Cars of the Stars and Planes of Fame” museum in Buena Park, California. Photo: www.justacarguy.com

GM Design Director Dave Holls took this photo of Halprin’s Adler Trumpf at the 1959 Michigan State Fair. Holls asked Halprin to bring his car to the GM Tech Center where it was photographed. The images were no doubt shown to Mitchell and Shinoda. Months later a full-size clay study of the XP-720 with the Adler Trumpf roof was shown to GM’s management and the project for the next Corvette was approved.

Bill Mitchell charged Larry Shinoda to take the styling of his Stingray Racer and make it into a car that could be manufactured as a convertible and a coupe. On October 20, 1959, the full-size clay Project XP-720 was on display for GM management viewing, with the Adler Trumpf “Sting Ray” roof. Photo: GM Archives

Note how different the roofline of Halprin’s car is from the car the raced at Le Mans in 1939. This roofline is similar to the 1963 four-seater Corvette study. Photo: James McLynas Collection

Meet eccentric Rubin Halprin. Had he not bought his Adler Trumpf Rennlimousine from a G.I. in Michigan, we probably never would have had the iconic look of the 1963-’67 Sting Ray. Photo: James McLynas Collection

It’s hard to believe this is Rubin Halprin and James McLynas’s Adler Trumpf Rennlimousine. At least this unique car had a happy ending. Photo: www.wallpapermania.com