Before She Was Miss Mighty Mopar, Judy Lilly Raced a Fuelie 1961 Corvette

Pioneer Judy Lilly with her Corvettes 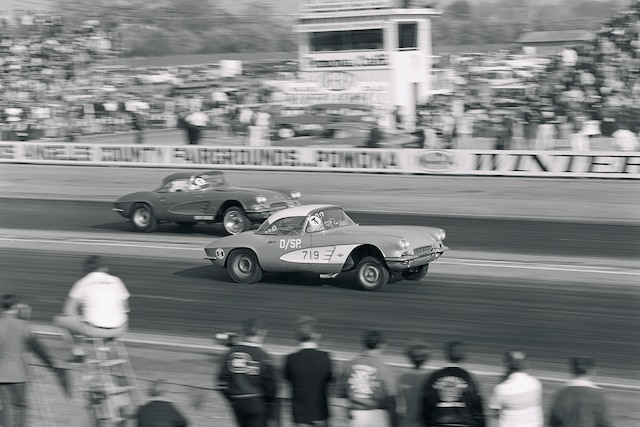 When talk turns to pioneering female drag racers, usually it’s the two Shirleys, Muldowney and Shahan, who get most of the attention. But they had a contemporary who was making waves on dragstrips, too: Judy Lilly.

Lilly is best known for the string of Super Stock wins she notched in various Chrysler-powered cars from the mid-1960s to the mid-1970s, including four Super Stock Eliminator wins in a row at the NHRA Mile-High Nationals in Colorado. “Miss Mighty Mopar,” as she was known, won five Division Five championships and was voted Car Craft magazine’s Super Stock Driver of the Year in 1972, 1976 and 1977.

Yet, Lilly laid the groundwork for all that success driving a fuel-injected 1961 Corvette. She began racing at her local Colorado tracks in 1961, and caught national attention when she won the B/SP class at both the 1965 NHRA Winternationals and the NHRA Nationals at Indianapolis. Hot Rod magazine’s Bud Lang, covering the stock classes at the Winternats in the Apr. 1965 issue, described Lilly as “sitting pretty after her class win” when the magazine ran a photo of her behind the wheel of her Corvette. Lilly “became the second young lady to take a class win in this year’s drag fest. She did so with a 105.00 mph run in only 13.39 seconds.”

(Quick trivia detour: The other female class winner at the ’65 Winternats was a Rose Gennuso, who was driving a Deuce roadster that belonged to her boyfriend, Tom McMullen. Yes, that Tom McMullen, and yes that Deuce roadster.)

Lilly repeated those wins a year later, her Corvette now running in D/SP (at the Winternationals) and E/SP (at the Nationals). Dick Wells, covering the Winternats in the March 1966 Hot Rod, listed all the rounds of the various eliminators at the meet, including Lilly’s success in Street Eliminator. She went all the way to the semi-final, running 12.75s and 12.80s, before falling to eventual Eliminator winner Jerry Harvey in a Mustang.

Those 1966 victories would be the last in her Corvette. The Chrysler folks approached her at the end of the 1966 season with an offer for sponsorship, and Miss Mighty Mopar was on her way. Vette