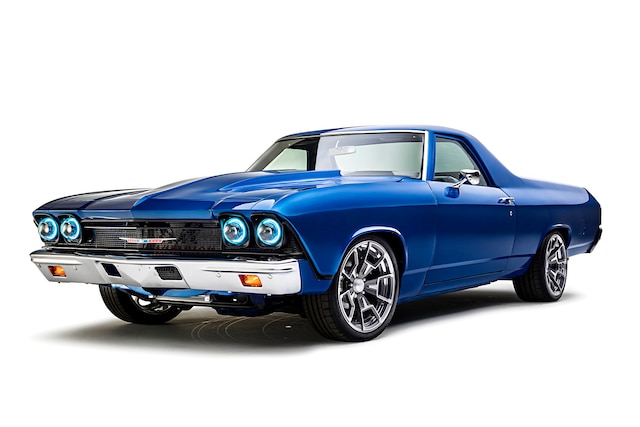 How often does a car build start with a simple conversation? We’re willing to bet more often than not, and in the case of Scott VanBuskirk’s stunning El Camino, that’s exactly what happened.

“It all started on Easter of 2017 when a friend of mine, Louis Marquez, approached me after Easter service and told me that he would be moving. He had a 1968 El Camino that he had taken apart to restore, but had never gotten around to it. He knew where I worked and knew I could get it back together. The car was a basket case,” he says. “Louis said if I wanted it, it was mine. I thanked him and did not give it much thought at the time because I was so busy. Later, I talked to my wife and after talking to her I had told her I did not think I was going to get it because it was such a large undertaking.”

As the Purchasing Manager at TMI Products, a manufacturer of aftermarket upholstery kits and more, VanBuskirk is in a unique position in the automotive aftermarket. So when his co-workers found out this car was available they began to push him to get it, and you can guess where the story goes. TMI has a monstrous SEMA presence every year and was in need of a fifth car for their 2017 display right when this car came available.

“I went back to Louis and asked him more about the car. He told me that he had gotten it around 1982 and drove it until 1990 when it stopped running. It was at that time he completely dismantled the car with the intention of restoring it,” says VanBuskirk. And there it sat, pieces piled in boxes, until Scott showed up with a trailer on April 29, 2017. He towed the car in to the shop at TMI for everyone to look it over, and they determined it was in good shape, with a clean, straight body and no visible rot. At some point the roof had rotted out so a new roof had been dropped onto the chassis, but not welded into place.

“I took the car back home and started to sort through all of the totes and piles of car parts that were given to me, to begin to make a plan of what I could use and what needed to be replaced. I put together a checklist of what I had to purchase, such as a motor, transmission, wheels, tires, brakes, and so on,” he says.

It was at that point that paranoia set in as he realized just how many things could and would go wrong with the build. Ultimately, though, he has just one regret: not building a bigger engine. And what enthusiast among us can say they haven’t had the same thought after the completion of a project?

The frame-off restoration blends in a stock, 2002-vintage LS1 engine with FiTech fuel injection on top, sucking fuel from the Tanks Inc. fuel tank. With the severely limited timeframe to get the car completed, the decision was made to limit the underhood modifications to prevent any unexpected issues.

With the exception of appearance and update items, the engine was left mostly stock, save for the Holley sheetmetal intake manifold, CFR oil pan, LS coils from Sultans of Spark, and the aforementioned FiTech system. Headers from Doug’s were ceramic-coated and combined with a set of 2.5-inch Flowmaster mufflers in the custom-built exhaust system. To make all of the pieces work with the late-model engine and early-model chassis, a harness kit from Painless Wiring was set into place.

An engine oil cooler from CFR; a Champion Cooling three-row, dual-pass aluminum radiator; and AFE air cleaner were also employed in the engine compartment. The complete All American Billet serpentine accessory drive system was installed to dress up the engine’s appearance, and Lokar dipsticks installed for both engine and transmission oil.

Speaking of the transmission, the stock 4L60E remains behind the engine and is quite adequate for the requirements of the mostly stock engine. An aluminum driveshaft from Inland Empire Driveline Service sends the power back to the DiffWorks-built 10-bolt rear. The Right Stuff’s big-brake power disc conversion kit was installed, which includes everything to make the swap possible: 2-inch drop spindles, four calipers, drilled and slotted rotors, stainless steel hoses, all of the CNC-machined forged brackets and hardware, and even the forged aluminum hubs. In the rear of the Elky, Eibach springs were set into place to drop the car an identical 2 inches to match the front’s drop. US Mags Down Draft 18-inch wheels are wrapped in Continental ExtremeContact Sport tires measuring 225/40ZR18 and 255/35ZR18, respectively.

Of course, since TMI was heavily involved in the build, it only stands to reason that the company’s complete catalog was touched to make this car come to life. The company’s grey-and-black Pro Series Low Back GT seats with blue accents cradle the driver and passenger, with TMI’s door panels upholstered to match and TMI black carpet on the floor. A Forever Sharp steering wheel was wrapped to match by TMI, with a custom headliner and floor mats also created by the TMI team. New glass from Original Parts Group and Dakota Digital gauges finish off the interior.

And that stunning exterior? The Subaru World Rally Blue pigment was applied by Raul Zuniga Paint & Body, with powdercoating of all of the critical components completed by Seven S Powder Coating.

Gabe, Ron, and Albert of RnG Customs, Classics and Fabrication completed the wiring, exhaust, fuel tank, and fuel system plumbing. Dylan VanBuskirk did most of the metalwork, replacing the roof, removing and welding up the driprail area, split and welded the firewall and transmission housing area back together to work with the LS and 4L60E, and replaced portions of the floor. Brian Reno modified and upgraded the windows to one-piece units, doing away with the vent windows and streamlining the appearance. Other assembly work and assistance was given by Brandon VanBuskirk, Bud Dosher, and Don Lee.

It was a massive amount of work, but given what we’ve seen from the TMI team previously, we’re not surprised that they pulled it off. There were large stumbling blocks, not the least of which was the meniscus tear Scott suffered on June 2nd, with surgery taking place on September 2nd, just as they really started to drop the hammer on getting the build finished. Then the body didn’t want to fit back onto the chassis because of interference with the engine and transmission, but the team came together and ultimately took the car from the initial buckets of bolts to a completed, in-the-trailer-on-the-way-to-SEMA build in the span of six months to the day, as the car left for the 2017 SEMA Show on October 29, 2017.

“I had a great support team and I was back up with the car working on it the day after surgery, not able to do much but still moving forward. The memories and the bonds of friendships will not be forgotten and were so appreciated during this time of possible discouragement,” he says.