Before There Were Funny Cars, There Was the 1966 Chevy Chevoom 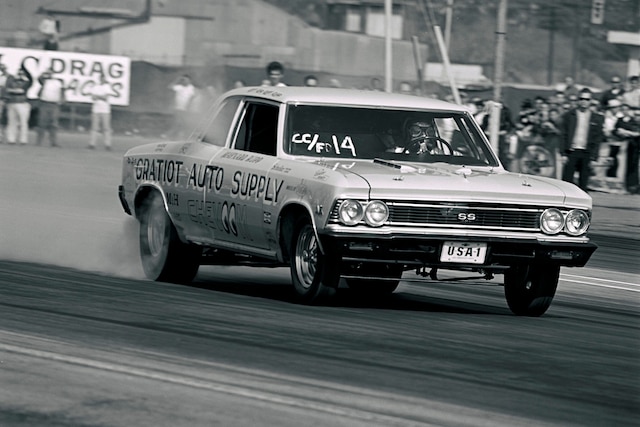 That’s Maynard Rupp quoted by Howard Pennington in the May 1966 issue of Car Craft magazine about drag racing in general, and his latest project in particular, a scratch-built, fiberglass Chevelle that Rupp called Chevoom. Rupp had been a Top Fuel dragster driver, but decided to change things up when he didn’t finish as well as he wanted to at the 1965 NHRA Nationals. “Most smart strip promoters” had their eyes on funny cars for 1966, and Rupp said he “had a couple of solid bookings for my new car before I had ever fastened the first pieces together.”

He decided to build a Chevelle “because the single biggest group of drag fans are probably still the ‘Chevy lovers,’ and there aren’t any factory funny Chevies they can cheer for.” He strove to make the car as stock looking as possible since “one of the reasons any kind of stock car racing is so popular is because the cars on the track look like the cars people drive. So I figure the more my new car looks like a real Chevy, the more the Chevy fans will like it.”

That’s why he ordered a body assembly the day 1966 Chevelles went on sale, and then had those components splashed to make his car’s fiberglass body. It was no one-piece shell; Rupp insisted that the doors and hood could open, and that it wore the stock Chevelle’s chrome body trim.

While the body was being created, he built a frame from 4130 chromoly that had a NASCAR-type rollcage and a removable subframe to cradle the car’s engine, transmission, and rearend.

One of the biggest deviations from a stock Chevelle was in the car’s wheelbase. At 128 inches it was more than a foot longer than the stock car’s, with 11 of those extra inches in back “to get everything so it would fit properly” and for proper handling, Pennington wrote.

Another big change was its engine placement. Rupp said there were “several reasons” he wanted the engine behind him. “Safety is one. There’s no oil bath or fire in your face if the engine blows. I had enough of that driving a dragster.” Any parts blown out of the engine would also exit the car away from him.

“Traction is another reason. With most of your weight naturally near the rear wheels there’s no advantage in raising the front end. That’s just one of the ways a rear engine helps make my car look more stock to the spectators.”

That engine, by the way, was “one of the old reliable Chrysler 354-inch Hemi heads that seem to dominate the dragstrips,” Pennington wrote. The ’56 block was stroked to 402 inches and topped by a GMC 6-71 blower, Weiand intake, and Enderle port injection. Power moved from the Hemi to a Chrysler TorqueFlite transmission “modified with ’65 MoPar high-performance Hemi parts” by Art Carr. “I never could punch a typewriter very well, but I could always move a lever,” Rupp said, explaining why the TorqueFlite’s pushbutton shift box would be swapped for a Hurst shifter. “I honestly don’t know how it will work,” Rupp admitted, “but the Hurst people said they could do it and that’s good enough for me.”

Pennington wrote his story (which went into minute detail about the car’s assembly) before Rupp completed the Chevelle, so he couldn’t say how it would actually perform. But coverage of the 1966 Winternationals in that same issue of Car Craft said Rupp “impressed fans at Pomona greatly. Car ran in 160s and showed great signs of what it will be doing in future. Machine also took Motor Trend Magazine’s Best Engineered award for design and construction.”

Rupp would race Chevoom for a couple of years, giving the Chevy lovers something to cheer about. But its most notable achievement was winning the Ridler Award at the 1966 Autorama in Detroit.