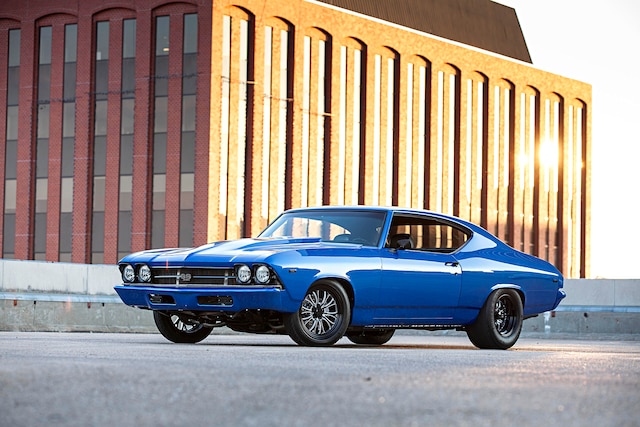 What really makes you a car guy or gal? Some say either you are or you aren’t. Try explaining it to an outsider and see if they get it. The point is we all have this sort of common bond. It’s a feeling you have. It’s that first ride you took that made your hairs stand up. You know, that tingly feeling that runs up your spine at the symphony above 6,500 rpm. It’s hearing the syncopated rhythm of a proper cam that stops you dead in your tracks. Yeah, that feeling.

Born and bred in Nebraska, you could say Jeff Behrens is the epitome of a car guy. He’s owned enough of them by now that you could also say he’s a Chevy guy. Jeff is a hard-working father of two who was infected with the car virus early on. And hard work runs in his family. Jeff took his first ride with his grandfather, Arnold Behrens, who got him started with wrenches out on the farm. Just a few days after we started this feature, Arnold passed away. He was a man who lived to see 103 years. A man who served his country in World War II, he was a pilot, a family man, and among many other things, he was very much a car guy.

At 12, after blowing up his first dune buggy engine, Jeff’s grandfather taught him something that stuck, “If it comes apart, it has to go back together … just gotta figure it out.” Suffice it to say that Granddad’s ideals have sunk in a little since then. It’s a simple concept that still pushes Jeff through some of his toughest projects today. His versatility in the garage hails from a long record of homebuilt restorations … 32 years worth to be exact. That’s a whole lot of hours, months, and years in the garage just figuring this stuff out. Not everybody has that kind of tenacity.

But today, here sits Jeff’s pride and joy: his beautiful, blue 1969 Chevelle. Yes, that eye-popping color is called Voodoo Blue Metallic, and you can’t miss it. “This is the third Chevelle I’ve owned and I decided to make it stand out from the crowd,” Jeff said. He built this car to have fun with. And he knows how to have fun with it, too. Running around with the cutouts open is not an unusual practice for Jeff. And you can bet your ass you can hear the screams of his Magnuson supercharger over the exhaust.

It was an eBay find out of Arizona. It came with a few dings and scratches, but most importantly the body and frame were rust-free. “The car came with a book full of diary-like pages with hundreds of drag slips and comments about what did or didn’t work that day to make the car run better. The quickest e.t. that I could find was 12.56,” Jeff recalls. It even wore the original Azure Turquoise paint when he got it.

Remember that part about how hard working Jeff is? Apart from re-spraying it, Jeff did everything himself. He busted his back and finished the frame-off restoration in about eight months, without a rotisserie, Jeff would tell you. “I was working second shift and would set the alarm for 8 a.m. and work on it until it was time to go to work every day,” Jeff continued. How many people do you know that work until it’s time to go to work?

Ol’ Blue has sort of evolved over the years, too. It rolled into Jeff’s garage with a 468 big-block that had a couple of flattened cam lobes. So, version 1.0 ran with a big-block 427 and a four-speed. After a change of heart, and catching a little flack, he dropped in an all-aluminum LS2. And then came the supercharger, which went on soon after his first son was born in 2013. As much as he enjoyed three pedals, Jeff figured he better back it up with a 4L80 trans—perfect to handle some extra power with the added beauty of overdrive.

The stylish black interior upholstered by Xotic Customs feels clean, especially with the crisp, new sound system. Down the center, Jeff rests his arm on a hand-fitted Cadillac console with nicely contrasted carbon inserts. In keeping with the quarter-mile theme, Jeff fitted a set of Jegs’ SSR Spike drag wheels with custom-machined center caps made by Atomic Machine. Hell, it was an old SS drag car—an old drag car that has shed its skin. Welcome back.

At the same time, it’s much more than that. An outsider might look and see a neat little muscle car. But, an outsider wouldn’t know that Jeff’s Chevelle was assembled with the gritty working-class ethics his grandfather taught him. It’s a tribute, a symbol of a loving grandfather, and a trophy that should be held up high for busting his back year after year. I don’t think you really need to ask what makes Jeff a car guy—it’s genetic. CHP

Lost for 47 Years, 1969 Chevrolet Yenko Chevelle Comes Out of Hiding & Is Headed for Restoration