Most R&D Corvettes never leave Chevrolet’s gates. This one did, as a “thank you” for helping astronauts get special Corvettes. 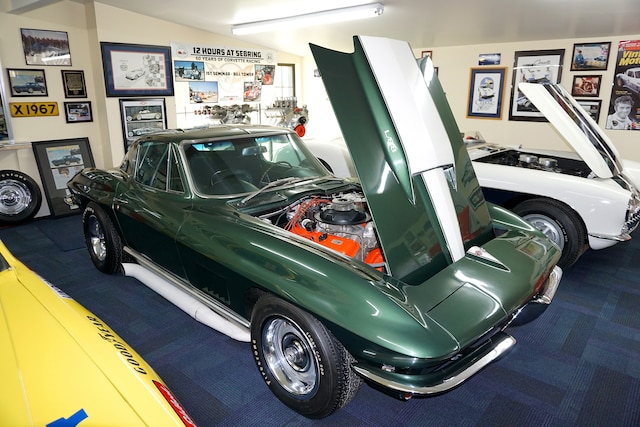 Beginning in 1957, Zora Arkus-Duntov, with the help of fellow engineer and three-time Indy 500 winner, Mauri Rose, launched an RPO parts program unofficially known as “racer kits.” Customers could order a complement of options that provided them with an excellent platform for building a competitive car. The C1 racer kits were wildly successful.

The 1963 Z06 racer kit was patterned after the previous kits with suspension and brake upgrades, combined with an improved L84 fuel-injected 327 engine. Everything looked good until the arrival of Shelby’s Cobras. Mickey Thompson’s Z06 Sting Ray took a debut win at the L.A. Grand Prix, but it was a default win; as Shelby’s Cobra broke close to the end of the race. The writing was on the wall; the 327 fuelie Z06 didn’t stand a chance.

Aside from the unusual side pipes, the subtle marking on the hood and the wider tires, this looks like any other 1967 big-block Sting Ray coupe.

Early in 1962, Chevrolet decided to phase out their W-Series 348/409/427 truck engine. The prototype Mark II made its thunderous debut in Mickey Thompson’s Z06 Corvette at the 1963 Daytona 250 and then at the 1963 Daytona 500 in a Smokey Yunick-prepared 1963 Impala. The automotive press dubbed the cars “Chevrolet’s Mystery Motor.” Between Duntov’s antics at the Sebring Grand Sport testing, followed by the press clamoring over the Mystery Motor Chevrolet race cars, GM President, Frederick Donner made it clear; there will be no Chevrolet involvement in racing.

Development on the big-block engine for passenger car use continued. A Mark III big-block project using tooling from Packard was considered and rejected. The Mark IV went into production in mid-1965 as the Turbo-Jet 396. The under-rated 425-horsepower L78 396 big-block Corvette option hit the street in spring of 1965 costing just $292, whereas the 375-horsepower fuelie cost $538. Duntov compensated the extra weight with stiffer springs, shocks and sway bars. He immediately went to work on the L88 racer kit.

Since most of the 20 1967 L88 Corvettes built went to racers in early spring of 1967, the car magazines didn’t get a hold of any of the cars to road test. Besides, as the L88 was not a car for street use, there never was going to be a “road test.”

The L88 package was an all-out race car. The 430-horsepower rating was bogus; 560-horsepower is more accurate, and good for 640 horsepower with open headers. The aluminum heads saved 75 pounds from the front end and slightly lowered the car’s center of gravity. With 12.5:1 compression, 103-octane fuel was mandatory. The dual-plane aluminum intake manifold was modified to create a plenum chamber beneath the 850-cfm carburetor. The big carb was fitted with a unique air cleaner bonnet that was mated to underside of the Stinger hood that pulled in air from the low-pressure area at the base of the windshield. An aluminum cross-flow radiator with no shroud kept things cool at racing speeds. The L88 came with a small-diameter flywheel and a high-capacity clutch.

A few months after the ’67 L88s were released to racers; the press was treated to the debut of the new Mako Shark-styled 1968 Corvette. After that, no one was paying much attention to the ’67 Sting Rays, let alone an obscure racer option.

Four L88s raced at the 1967 12 Hours of Sebring with the Sunray DX-sponsored car finishing 10th overall and 1st in GT. Then, in June, at Le Mans a Dana Chevrolet and Sunray DX-sponsored L88 qualified 10 seconds quicker than the existing record. During the race, Dick Guldstrand was clocked at 171.5 mph on the Mulsanne Straight. Unfortunately, 11 1/2 hours into the race, the L88 threw a rod and was out.

One of Bill Tower’s many assignments as a development engineer was to help solve some of the issues on the L88 before it was released. Tower recalls, “For a time I was working at the GM Proving Grounds to get the L88 ready. Man, did it have problems. The biggest was the car kept overheating. We finally fixed that with a stiffer fan clutch. Another major problem was with all that power on skinny, stock bias-ply tires. The car was dangerous to drive.

Unrestricted power was the L88’s end game. The L88 was seriously under-rated at 430 horsepower; 560 was more like it with stock exhaust manifolds; 640-horsepower was easy with headers. This was fantastic power in 1967.

“To solve the tires issue we had the Kelsey Hayes people come to the Proving Grounds with their truck and wheel-making equipment. We wanted to put the new Wide-Oval tires on the car without trimming the inside lip of the wheelwell. So the Kelsey-Hayes people just kept making different offsets until we got it just right. The end result was that the car handled much better.”

The side pipes are the most obvious non-stock items. Tower explains, “These are very similar to what were used on the Grand Sport cars. The header tubes gather together in a straight-line narrow collector that bends back into an expanded 3-inch diameter side pipe. With the 12.5:1 compression in the L88, when we had that car out on the test track on the high banks, everyone stopped what they were doing to watch. A lot of what we did, the racers would be doing anyway; we just wanted to try out some things. But this is not how the cars were sold.”

Typically, when engineering is done with test cars, the parts are stripped and what’s left goes to the crusher, but sometimes they get away from R&D. Jim Rathman Chevrolet, in Melbourne, Florida, was known as the Chevrolet dealership to the astronauts. For a few years, Chevrolet gifted the Apollo Astronauts with 427 Corvettes that came through Rathman Chevrolet. As a “thank you” for handling the astronaut cars, Rathman was given the Greenwood Green L88 development car. The trouble was that the L88 had been damaged and was not running, and was on top of the carrier. Tower talked with the man that unloaded the car who said that it literally bounced from the top row to the bottom, but luckily it stayed on the ramps. The engine problem was a broken valve that was repaired.

Melbourne is only 90 miles from Daytona, so Rathman took the L88 to the famous track to let it stretch it’s legs. At Daytona, the L88 was clocked at 180 mph and barely avoided disaster. During its last run, one of the Wide-Oval tires shredded, tore off part of the fender, severed the fuel line and started a fire. The damage was not extensive.

Instead of an open dome on the underside of the hood, the L88 hood had a receptacle that mated with the air cleaner bonnet so that when the hood was closed, air was pulled in from the open part of the back of the Stinger hood. At high racing speed, the low-pressure area at the base of the hood ramcharged air into the L88.

Rathman was done with the car and sold it to a local dairy farmer. While the farmer’s son had the car, the L88 engine broke and was replaced it with a normal big-block. Around 1972, after the farmer’s son was done with the car, Tower learned of a big-block ’67 Corvette that was available. At first Tower didn’t know it was the R&D car until he talked with Rathman who told him how he acquired the car. Tower worked a deal with the farmer to buy the car, plus the broken L88.

After Tower got the car home, it sat in his garage for a while until he got around to repairing the L88. Aside from the broken engine and racetrack mishap, the car was in good condition. It is still every bit as much as the beast it was in 1967, so Tower never drove the car on the street. “Why have it then?” you wonder. Tower explains, “I just like preserving history when I can. I didn’t buy any of the unique cars in my collection as investments. I was just lucky enough to be able to get them when I could.” Vette

The unusual air cleaner bonnet mated perfectly to the underside of the hood.

The unique headers and side pipes were made available to L88 customers through Chevrolet.

The Chevrolet-engineered unique header-side pipes were the same design as those on the small-block Grand Sports and made by an outside vendor.

Look closely at the Rally Wheels. 1967 Corvettes came with 15x6 pressed-steel wheels shod with 7.75x15 bias-ply tires. The L88 needed more tire and a wider stance. Engineers worked with Kelsey-Hayes to make a 7-inch wide wheel with the correct offset, so that the inner fender lip would not have to be trimmed.

L88 Corvettes sold to the public had the octane requirement sticker in the center console, just to the rear of the parking brake lever slot. The round sticker is proper tire inflation pressure.

The small Corvette cross-flag emblem never made it onto the production L88s.

The stamped steel plate on the driver-side doorjamb tells it all.

Tower says that the windshield of this L88 Corvette was raked back slightly for a little extra aerodynamic edge.

This photo hangs on the wall just behind the L88 ’67 Sting Ray. Note the slight forward rake. Tower explained that because the L88 weighed around 75 pounds less than a cast-iron big-block, the engineers ran compression tests to adjust the spring tension, and slightly lowered the front. Bill Tower Collection

The L88 is alive and well as a GM Crate Motor. Note the much taller valve covers. While the new version is basically the same, numerous engineering improvements have been made. GM Archives

On the left is the 1967 Sunray DX entry at the 24 Hours of Le Mans. On the right is a different L88 sponsored by Dana Chevrolet and Sunray DX at Daytona. Bill Tower Photo Collection and corvetteforumn.com